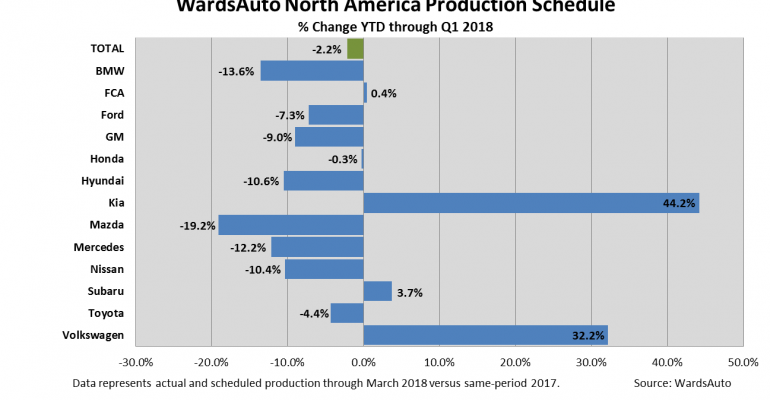 Bucking recent trends, the reduction in the first-quarter 2018 production outlook will result more from cuts in trucks, as well as in total output in Mexico.

Nearly 50,000 units have been cut from the North American light-vehicle production outlook for first-quarter 2018.

Production for January-March has been pared to 4.39 million units, 2.6% below the same period in 2017. Production is forecast to rebound in the second quarter.

Bucking recent trends, the Q1 reduction will result more from cuts in truck output, rather than cars. January-March light-truck output was shaved by some 38,000 units. Cars were cut by 12,000 units.

The majority of the truck reductions were centered in pickups, as some manufacturers were expected to slow production ostensibly for inventory control, or perhaps to perform some early tooling changes for upcoming redesigns later in the year. Both FCA US and General Motors in 2018 begin phasing in production of redesigned versions of their fullsize pickups.

In FCA’s case, it begins production of the new ’19 Ram Pickup in its Sterling Heights, MI, plant, which has been closed since 2016, in Q1 while it continues production for most of 2018 of the current versions in Warren, MI, and Saltillo, Mexico. The re-start of the Sterling Heights plant, which built cars prior to the shutdown, will be a boost to total volume for FCA.

Other truck reductions were made in CUVs and in the Small and Large Van segments.

Most of the cuts in cars were in midsize models.

The majority of Mexico cuts were in trucks, but it also accounted for a large portion of car reductions. U.S. plants also posted declines in Q1 plans for both cars and trucks. However, Canada’s car output was increased, while trucks remained nearly flat.