BROUGHT TO YOU BY 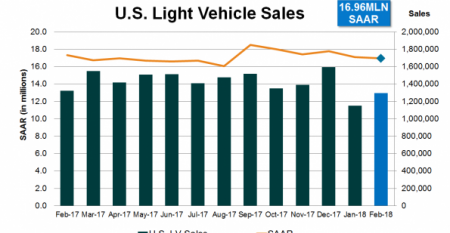 U.S. Sales Continue Slight Weakening in February
Mar 01, 2018
Without a rebound in incentive spending, and some continued strength in fleet deliveries, March’s SAAR could fall below 17 million...

U.S. Sales Start 2018 With a Lower SAAR But Still Strong Overall
Feb 01, 2018
With CUVs hitting a record 38.6% market share in January, it’s just a matter of time before penetration...

First-Quarter 2018 North American Production Outlook Cut 50,000 Units
Jan 02, 2018
Bucking recent trends, the reduction in the first-quarter 2018 production outlook will result more from cuts in trucks, as well as in total output in Mexico.

Trucks Could Nudge 70% Share in December as U.S. Sales Likely Post Another 17 Million-Plus SAAR
Dec 06, 2017
U.S. demand will have to stay close to the 17 million-unit SAAR level early next year for inventory not to again become a problem of excess.

Production Cuts, Strong Sales Whittling Down U.S. Inventory
Nov 03, 2017
U.S. light-vehicle sales next year likely will resume the 16.8 million-unit annual pace, or lower, 2017 was tracking before the results of the previous two months lifted the year-end trajectory to 17 million.

Inventory Control, Replacement Demand Cause Second Straight U.S. Sales Surge
Nov 01, 2017
Going into October, the industry was burdened with excess inventory of ’17 models, with dealer stocks an estimated 10% to 15% higher than necessary.

Post-Hurricane Demand, High Inventory to Strengthen Year-End U.S. Sales
Oct 06, 2017
How much inventory automakers are loaded with in December could determine the strength of a year-end sales surge to lower...

North American Capacity Utilization to Dip in 2017 Despite Higher Production
Feb 06, 2017
Despite an expected sales downturn, production will rise in 2017 due to added capacity and increased export output.

North American Capacity Utilization to Slide Below 100% in 2017
Nov 10, 2016
While capacity utilization in the U.S. and Canada will decline in 2017, Mexico’s facilities will increase to 104%.
Load More