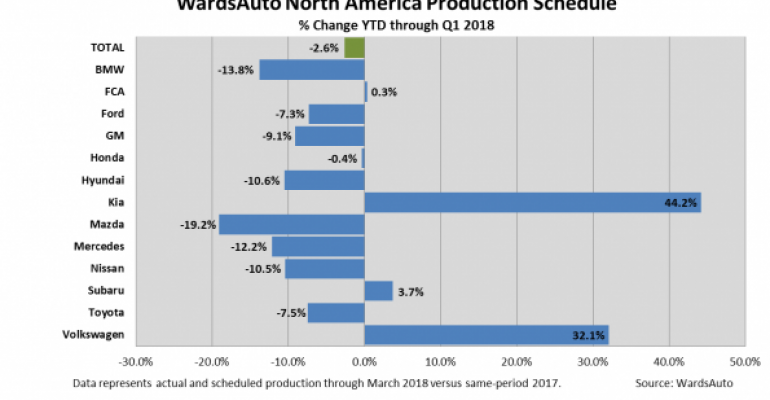 Manufacturers anticipating increases mostly are those that have added capacity and new products to their North American footprint since last year.

The North American production outlook for all vehicles, including medium- and heavy-duty trucks, for Q1-2018 has been shaved by slightly over 19,000 units from the first look at the period in December.

Q1 production is projected at 4.49 million units, 2.6% below like-2017’s 4.61 million. The majority of the cuts are in cars, while trucks remain relatively unchanged.

Most of the downward revision is in Canada, with most of the remainder in the U.S.

Most manufacturers are expecting year-over-year declines in the first quarter. The OEMs anticipating increases mostly are those that recently have added capacity and new products to their North American footprint. Much of the additional capacity is replacement of overseas sourcing.

Among those on tap for Q1 increases are Kia, Subaru, Tesla and Volkswagen, as well as most big-truck manufacturers.

A year ago, Kia was just ramping up output of the Kia Rio, and had not yet started production of the Hyundai Accent. Also, Subaru added production at its Lafayette, IN, plant this month of the all-new Subaru Ascent large CUV, while Volkswagen is producing the Volkswagen Atlas, Tiguan and Audi Q5, which all were just ramping up a year ago after starting first-time North American sourcing. Additionally, since Q1 2017, Tesla added the Model 3 at its plant in Fremont, CA, and the Daimler-Nissan joint venture in Mexico is slated to start production of the Infiniti QX50 during January-March.

FCA also is heading for an increase, albeit less than 1%. If FCA’s outlook holds, the manufacturer will post its first year-over-year quarterly increase since Q1-2015.

Two FCA plants in the U.S. closed a year ago for retooling to different products – Belvidere, IL, and Sterling Heights, MI – are in production now, and more than offsetting slowdowns at its Warren, MI and Toledo, OH, South facilities. Warren is slowing production of Ram pickups in preparation for changeover to new Jeep and Ram products, and Toledo South will close at the end of the quarter for changeover to a future Jeep product.