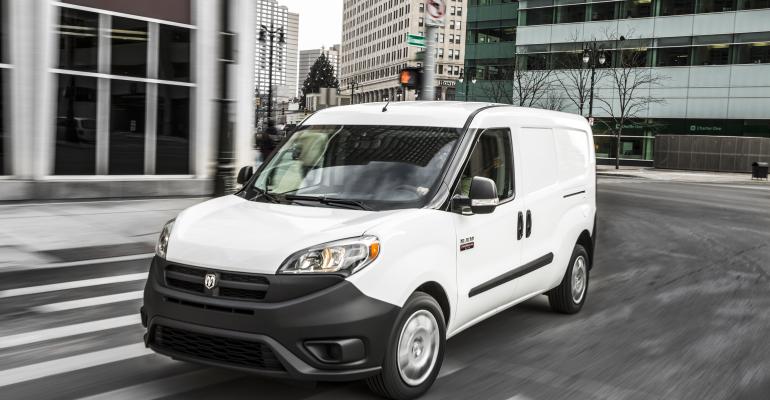 <p><strong>Midsize Pro Master City favorite for hauling everything from tools to flowers.</strong></p>
Industry

OAKBROOK, IL – In only five years, Ram Commercial truck and van operations have grown from virtual obscurity to a 15% share of the commercial-vehicle market.

But hold the plaudits, insists Dave Sowers, head of Ram Commercial vehicles for FCA US.

“We aren’t satisfied with 15% and need to grow further,” Sowers says in an interview before updating the Midwest Automotive Media Assn. about how Ram Commercial has done in the past and what it expects to achieve in the future.

Ram Commercial sells fullsize cab chassis trucks derived from Ram 3500, 4500 and 5500 pickups, along with fullsize Pro Master vans and a midsize Pro Master City commercial van derived from Fiat vehicles in Europe. The trucks and vans are customized or upfitted to buyer specs for holding tools and materials for tradesmen such as carpenters or plumbers, or serve as delivery vehicles by carrying items such as lumber or flowers.

Trucks offer gasoline or diesel engines; the big Pro Master van gas or diesel; the small Pro Master City, gas only. There’s a choice of rear- or all-wheel-drive for the trucks but front-wheel-drive only for the vans.

“There’s no plans to add all-wheel drive to either the Pro Master or Pro Master City, because with FWD the drivetrain doesn’t prevent us from offering a lower cargo floor for easier entry and exit for our customers,” Sowers says. “Besides, we don’t see the demand for AWD and the added cost.”

Sowers says about 70% of the cab-chassis trucks and about 15% of the big Pro Master vans are sold with diesel power.

“Diesels are popular in the bigger vehicles because they deliver long driving range as well as increased towing capacity – up to 31,000 lbs. (13,950 kg) – while the gas engine is popular in the small Pro Master City van because it delivers very good mileage, up to 29 mpg (8.1 L/100 km) highway,” he says.

Sowers says 250,000 Class 2 vans and 90,000 Class 1 vans were sold industry-wide last year. He won’t talk about Ram numbers for 2016 but says he expects sales to increase this year thanks to an anticipated strong second half, especially the fourth quarter.

“The government approved special tax credits for small businesses last year, but the approval didn’t take effect until December. This year, as the end of the year approaches, small businesses will have the time to realize if they are going to make a profit for the full year…they can start spending in October, November and December to take advantage of the tax breaks,” he says.”

“Also contributing to a strong sales outlook are lower gas prices, rising housing starts and businesses having no trouble getting credit – all factors that influence confidence and an increased willingness (by commercial customers) to spend money on new product.”

Sowers also notes a large number of CVs now in use are 11 years or older and soon will need replacement, which should spur pent-up demand.

It also helps that Ram Commercial now has 1,000 dealers, up from 900 a year ago and only 400 in 2012, the year Ram Commercial became a stand-alone brand from Ram truck.

The executive says he’s satisfied with Ram Commercial’s current range of vehicles and the sales they generate. “We cover the bulk of products customers want now, though maybe more is needed in big, over 10,000-lb. (4,540-kg) vehicles.”

It’s been extensively reported several automakers are going to offer new midsize trucks in the near future or are planning to add them, such as a return of the Ranger at Ford, a Santa Cruz from Hyundai and a small Mercedes pickup that would join the Toyota Tacoma, Chevy Colorado and GMC Canyon in the small-truck segment.

Asked about plans for retailing a smaller Ram pickup that could be joined by a small commercial-pickup companion and perhaps a commercial-van derivative, Sowers replies:

“We’ve looked at a small pickup for some time and are watching that market. But we have no firm plans to announce. If we did a small truck it would only be as a commercial truck, and we wouldn’t look at launching a new smaller van, since we already have the ProMaster City.”

Asked about the chances Ram Commercial will offer a battery-electric vehicle in addition to its diesel and gas-powered offerings, Sowers notes: “Fiat has one in Europe, an Iveco electric van that we looked at for (the U.S.), but interest in electrics rises when gas prices rise and with gas below $2.50 a gallon an electric van isn’t high on our (priority) list here.”