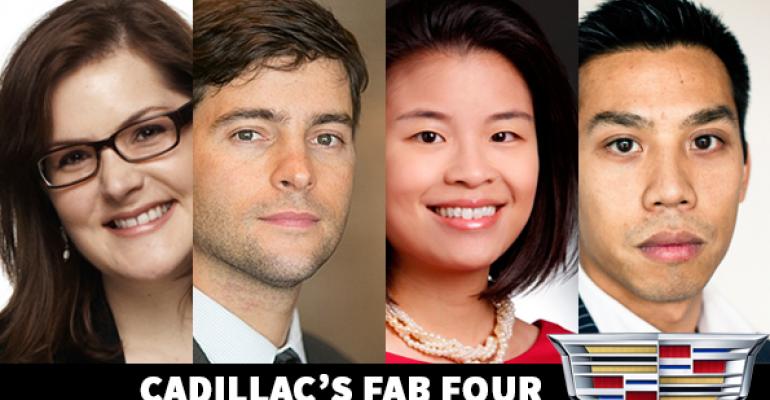 Call them the Fabulous Four, a quartet of rising-star marketers plucked from leading luxury houses and tasked with making the iconic but languid Cadillac brand hip again.

The group includes a lifestyles chief who literally wrote the book on how to be a modern gentleman; a compact-SUV manager who jumped over from financial services; a global marketing planner who rocketed through the wine and spirits industry; and a brand-strategy boss fluent in Mandarin with public-relations experience on three continents.

Working out of Cadillac’s new global headquarters in New York, where electrical wiring recently still hung loose from freshly painted walls, they are the outsiders of outsiders in an industry known for its stubborn insularity.

The unlikely foursome also occupies the forefront of a $12 billion investment in Cadillac by parent General Motors, an outlay aimed at regaining relevancy in a global luxury market overwhelmingly dominated by the polished badges of Mercedes-Benz and BMW.

“There is an incredible challenge in front of us,” says Melody Lee, director-brand strategy and planning at Cadillac. Lee would be the group’s veteran, having joined Cadillac from Hill + Knowlton Strategies three years ago as the brand’s remake was just taking shape.

Incredible, however, may be an understatement.

On the sales front, Cadillac delivered 277,868 cars, trucks and CUVs globally last year. That is up a respectable 7.5% from year-ago, but a fraction of the 1.9 million deliveries by Mercedes-Benz. BMW reports global sales later today, but the reigning sales champion sold 1.8 million worldwide in 2014. Audi delivered 1.8 million units last year. Even Toyota’s Lexus brand, a niche player globally, sells twice as many vehicles around the world as Cadillac.

The Lure of Cadillac

In retrospect, the Cadillac brand hit the skids decades ago. While rivals Mercedes and BMW were spending billions on a gamble that would remake the U.S. luxury segment by marrying plush interiors with sporty driving dynamics, GM was content to bank on longtime customers loyal to the big, lumbering cars Cadillac shared with its other brands.

In short, Cadillac got old, slow and watered-down. The German brands, on the other hand, found the fountain of youth.

Sensing a slip, GM launched a multi-billion-dollar effort 15 years ago on the back of an all-new CTS midsize sedan. Its marketing strategy was fueled by the Led Zeppelin anthem “Rock & Roll.” But that comeback sputtered, as Cadillac again became lost amid the hungry mouths of seven other GM brands in the U.S.

Subsequent attempts to restart Cadillac have seen limited success, yoked by irrelevance in the eyes of younger luxury buyers.

Enter de Nysschen in 2014 with a commitment to Cadillac from GM leadership unseen since Alfred Sloan walked the halls of the automaker’s Detroit headquarters. The brand now will get dibs, if not long-term exclusivity, on new products and technology. Just as importantly, however, Cadillac gains autonomy from its sibling brands and a dedicated sales and marketing team removed from the GM bureaucracy.

“If we didn’t change the geography, the risk was the behaviors and attitudes would not change and we would end up in the same position, whittling things down to the lowest common denominator,” de Nyscchen recalls of the decision to move Cadillac out of town.

The same goes for the people charged with guiding the brand back, he says.

“Nobody who works at Audi or Mercedes works at those brands on a part-time basis. If you do try to tackle those jobs with part-time employees, you’ll get your butt kicked.”

De Nysshen’s vision is for a team of dedicated, focused and empowered managers in command of a lean, agile, startup-minded luxury-lifestyle brand. As such, the hiring of its four key marketing leaders can be seen as a pivot point for a brand that has been sowing the seeds of a bona fide product renaissance.

New vehicles such as the redesigned CTS and ATS compact sports sedan, especially their high-performance V-Series editions, now give the Cadillac name street credentials. The CT6 large sedan comes later this year as a temporary range-topping car in the spirit of Mercedes-Benz S-Class or BMW 7-Series. The XT5, a replacement for the brand’s best-selling SRX, also comes later this year. An entry smaller than the XT5 called the XT3 and meant to answer red-hot demand for pocket-sized CUVs, comes after that.

“There is no product gap,” says Nathan Tan, associate director-brand partnerships and experiences. Tan comes to Cadillac from Mercedes, where he led U.S. brand strategy and advertising production. Before that, he founded the luxury lifestyle brand Forgetful Gentleman.

“That is hugely inspiring and satisfying for a marketer,” he adds. “We all know people at other brands where that is not the case. To look in the mirror and say, ‘We are working on a world-class brand with world-class product,’ as marketers that is really, really satisfying.”

And simply too good to pass up for prime movers such as Pierre-Alexandre Lebard.

“It is a unique opportunity in a marketer or businessperson’s career, a once-in-a-few-decades opportunity,” says Lebard, manager-global marketing planning at Cadillac. Lebard came to Cadillac from LVMH, where he was global brand manager for Belvedere Vodka.

He wants to raise awareness of Cadillac among Millennials, which industry experts consider the largest car-buying population since the Baby Boomers who abandoned the brand and put Mercedes-Benz and BMW on top.

“If we can turn Millennials on to this brand, whether on the streets of Tokyo, New York or Berlin, that would be the wow-moment when the brand is restored.”

Tara Brannigan, manager-launch and lifestyle marketing at Cadillac, came over from American Express, where she built and rolled out new, alternative products for the financial-services giant. Brannigan also says the lure of restoring a brand drew her to Cadillac.

“It’s an amazing challenge, but the people who decided to come here are people who are up for that challenge, who get excited by that,” says Brannigan, a Wharton School MBA with degrees in economics and mathematics. “That’s what brings us into work every day. That’s the reason I’m here.”

Daniel Binns, executive director and global brand engineer in the automotive practice at Interbrand, likes the group. He also applauds the move to New York and early brand-building partnerships Cadillac has formed in fashion and design circles.

“I’m very impressed,” he says. “It is very easy to end up in the soggy middle ground of luxury (and) they are singularly focused on differentiation. They are being bold.”

But being bold cuts both ways, Binns warns. Cadillac’s product styling, like its “Dare Greatly” brand positioning, is an outlier in the segment. The headlamps and taillamps of today’s Cadillacs look like lighted daggers and the body sides are creased as sharply as a designer suit. Inside, the vehicles unite unlikely combinations of leather, wood, steel and carbon fiber.

It’s unlike anything from the more sedate German brands, which arguably could be more correctly positioned to win over Millennials less inclined than their parents to make statements of wealth.

“You need to be polarizing,” Binns says. “It is the direction (Cadillac) needs to go in.”

He cites Burberry, a 150-year-old fashion icon that hit rock bottom in the mid-2000s. But Burberry refreshed its products, going so far as to distance itself from its famous check pattern, went all-in on social media and A-list celebrity pairings and turned the old-school retail model on its ear by arming in-store sales associates with iPads so customers could shop online in addition to browsing merchandise on the floor.

“Can they approach how they deal with their customers in a different way?” he asks. “Dare greatly there.”

“The messaging and tonality and the direction, the ethos of Dare Greatly, really resonated with them,” she says. “We were pleased.”

However, as much as the marketers want to portray Cadillac’s new attributes, they also do not want to overlook longstanding ones. The brand’s legacy of craftsmanship, Brannigan says, will likely reverberate as strongly with Millennials as it did with their grandparents. She recalls a recent tour of Cadillac’s studios in suburban Detroit, where she saw designers toiling over parts and components with the same painstaking attention as young artisans near her Brooklyn home.

“The care we take in producing these cars, the craftsmanship and quality, is amazing,” she says. “We need to connect those dots, because there is a lot in the history and legacy to this brand that still applies today.”

The connection with designers and engineers in Detroit remains strong, too, the marketers say, echoing de Nysschen’s characterization as being caretakers of the brand.

“We have a duty to them, being entrusted with taking this brand forward,” Lebard says. “The connection is one of a shared mission.”

Tan says the marketing team’s efforts will be successful when the cocktail-party conversation shifts from “‘Why are you driving a Cadillac?’ to ‘Wow, you’re driving a Cadillac. Maybe you know something I don’t know.’

“That subtle difference in the initial perception of what it means to drive a Cadillac is at the heart of what we are trying to do here, which is build a luxury lifestyle around the brand that has a je ne sais quoi about it, rather than just talking about who has the most horsepower or rear-seat legroom.”