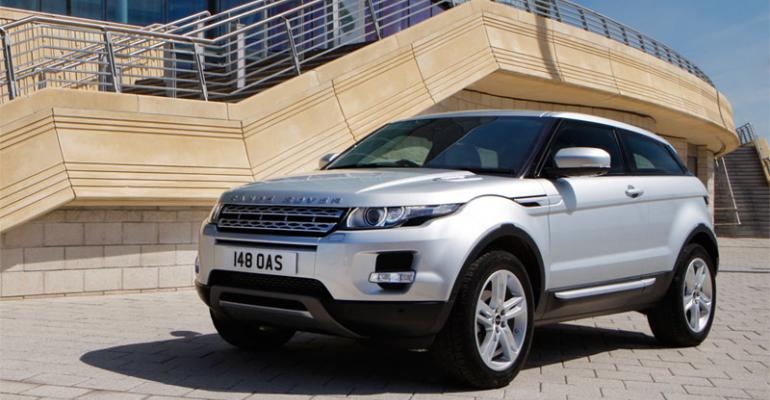 Range Rover&rsquo;s latest looks as if it is dressed for a royal wedding, but its sticker price of $49,745 represents a clear bargain. It&rsquo;s &ldquo;an aesthetic and quality homerun,&rdquo; notes one tester.

It’s rare, but it happens.

The instant the key fob is pressed to unlock the doors and power up the dome lights, it hits you: This one’s a contender.

The Land Rover Evoque conjures up such a moment.

“Pretty stunning,” says one Ward’s 10 Best Interiors judge. “An aesthetic and quality homerun,” another evaluator scrawls across his score sheet.

With its crisp lines, 2-tone beige and brown color scheme, jeweled gauges, crystal-clear HMI/navigation screen and sumptuous leather, the Evoque looks as if it is dressed for a royal wedding. But it doesn’t require a king’s ransom to own.

But even at $49,745, the Evoque represents a bargain in its class. “This is a lot for the money,” notes one tester.

Large dials and big buttons and navigation-screen icons make it a cinch to operate the climate system and select the right radio channel while moving down the road. Additional controls are on the steering wheel or well-positioned stalks, meaning the driver doesn’t have to peer through the spokes to find the cruise-control wand or access the information system.

A panoramic sunroof lets light in and creates an added feeling of spaciousness. Even with the sunroof, headroom is phenomenal, though rear-seat legroom in the Evoque is a little cramped. Cargo-carrying capacity isn’t huge, but the rear compartment is nicely finished, so luggage will travel in style, as well.

There are a lot of Jaguar cues here, from the gear selector to the navigation system and gauges, and it is difficult to imagine how Tata’s other British brand will move the needle if it jumps into the cross/utility vehicle fray as rumored.

But that’s Jaguar’s problem to figure out. For now, it is the Evoque that gets to set the bar others will try to hurdle.