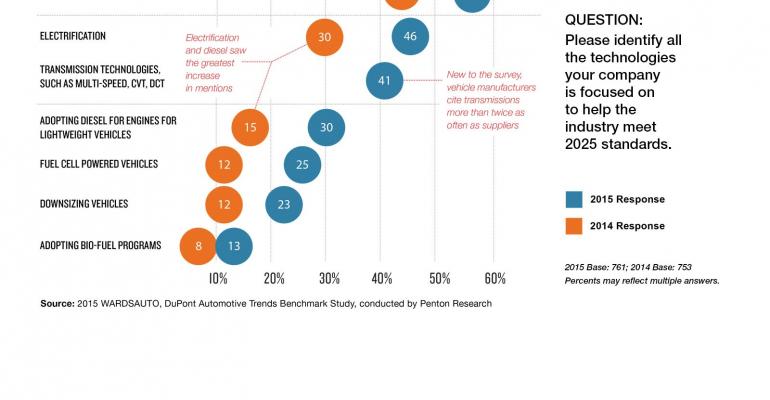 Almost 90% of auto engineers and designers say the CAFE goal for 2025 will stay the same or become even more stringent.

The average fuel efficiency of cars and light trucks sold in the U.S. now is ahead of U.S. EPA expectations but those gains are stalling, not because automakers aren’t offering enough fuel-efficient vehicles but because consumers aren’t buying them.

Cheap gas has rekindled Americans’ love of big trucks and CUVs while small cars, hybrid-electrics and plug-ins are growing cobwebs on dealer lots, making the prospect of hitting an unadjusted 54.5 mpg (4.3 L/100 km) by 2025 a lot tougher.

This promises a vigorous discussion between automakers and U.S. government regulators in 2016 and 2017 as they evaluate technology readiness and the ability to implement it at acceptable cost as part of a midterm review of the 2025 CAFE standards negotiated in 2012.

But the folks closest to the technology – automotive engineers and designers – are not holding their breath. In the latest WardsAuto survey of the engineering and design community, sponsored by DuPont Automotive, 87% of nearly 900 respondents say the CAFE goal for 2025 will stay the same or become even more stringent.

Only 13.5% predict a rollback of the rules, and comments from this group of respondents suggest they expect major political shifts in Congress and the White House in 2016 to amend the rules or eliminate them altogether. 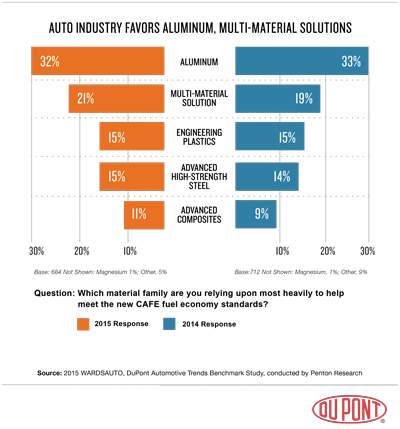 “Lots of progress has been made to improve fuel economy to meet the requirements, even though customers don't seem to be demanding it just now,” sums up one respondent.  “However, after 2020, further improvements will be much more difficult.”

Jeff Sternberg, technology director-DuPont Automotive, points out part of this conflict likely is the result of most major vehicle platforms now being global. They must meet carbon-dioxide emissions rules in world markets that in some cases are even tougher than those in the U.S.

Many New Tools in the Toolbox

Fortunately, the number of tools in engineers’ toolboxes is growing. Lightweighting and engine efficiency once again top the list of strategies being used to meet current and future challenges, but electrification, advanced transmissions and diesel powertrains receive lots of mentions as well.

Others cite the growing importance of height-adjusting suspensions and aerodynamics in improving the mileage of all types of vehicles.

“Lightweighting is a universal approach because it can be applied to every system and every component and it amplifies the impact of the other strategies,” says DuPont’s Sternberg.

“Electrification, which saw one of the largest increases in mentions this year, is fast becoming another universal strategy. Light electrification, such as stop/start, regenerative braking systems and transmissions and engine controls, is expanding across the light-vehicle fleet.”

Even so, engineers seem to be struggling with how to implement electrification strategies.

Cars such as the all-electric Nissan Leaf and Chevy Volt extended-range EV have been in the marketplace for more than five years, and hybrid-electric cars such as the Toyota Prius have been around for 15 years. But respondents say the role of electrification in meeting fuel-economy and emissions regulations still is clear as mud. Only 20% think electrification has found its niche; 77% say the technology still is evolving.

Designers and engineers seem less conflicted about what materials they plan to rely on most to meet 2025 standards. In automotive terms, that date is only two major product-design cycles away.

Aluminum is the favorite with 32% of respondents, followed by multimaterial solutions at 21% and 15% favoring advanced high-strength steel alloys and another 15% preferring engineering plastics.

Despite these strong choices, respondents say they still are only “moderately confident” today’s materials portfolio will help the auto industry meet 2025 standards.

Because their jobs are governed more by the immutable laws of thermodynamics and physics than man-made laws, automotive engineers were skeptical of the Obama Admin.’s 54.5 mpg CAFE target for 2025 when WardsAuto did its first survey in 2011.

There was lots of griping from designers saying they would be forced to design “aerodynamic blobs” and engineers predicted pickup trucks that couldn’t haul a load of cotton candy.

But they rolled up their sleeves and after a year or two of grumbling, engineers and designers started churning out efficiency advancements by the boatload. They also learned the 54.5 mpg bogey is the unadjusted number before numerous special credits are added.

In addition they discovered the rules acknowledge that bigger vehicles such as pickup trucks that haul and tow and are important to the U.S. economy will not be eliminated by the rules, which require vehicles to make fuel-efficiency gains based on the size of their footprint.

“’Mericans like thurr trucks,” drawls one engineer, but this doesn’t kill the can-do attitude among most of the engineers surveyed. “54.5 MPG by 20225 is going to happen!” enthuses one.

A total of 27,823 WardsAuto subscribers were surveyed between June 25 and July 13 and 863 completed surveys were received, for an effective response rate of 3.1%.

The survey, data collection and analysis were conducted by Penton Research, the research arm of Penton, parent company of WardsAuto. The methodology conforms to accepted marketing research methods and practices.