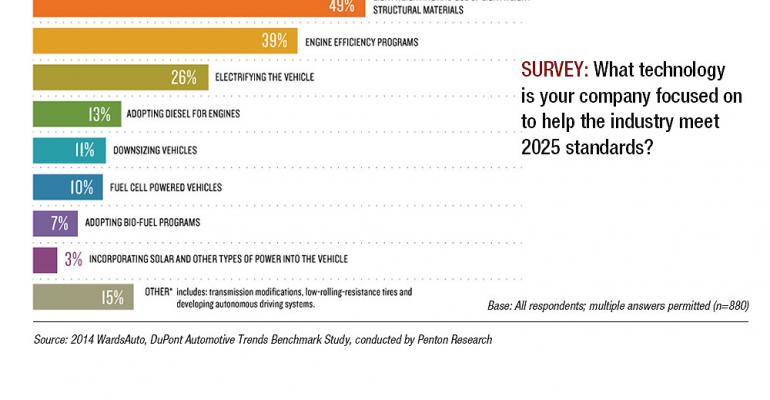 Almost 50% of nearly 900 automotive engineers surveyed say their companies are concentrating on lightweighting and the use of lightweight structural materials in order to hit 2025 fuel economy targets. &nbsp;

TRAVERSE CITY, MI – Powertrain improvements have led the first push to meet new CAFE standards, but automakers will shift their focus to lightweighting as new products are designed to meet tougher rules phasing in from 2017 to 2025.

Up to now, automakers have had success improving fleet fuel economy through downsizing and turbocharging engines, hybridization and introducing more advanced transmissions.

However, according to a new WardsAuto survey of automotive engineers and designers sponsored by DuPont, powertrain moves largely are considered low-hanging fruit that soon will be unable to propel the industry’s progress in meeting tougher requirements beginning in 2017 and hitting 54.5 mpg (4.3 L/100 km) by 2025.

This strategy already is apparent with the introduction of the ’15 aluminum-intensive Ford F-150 fullsize pickup going on sale later this year, which is 700 lbs. (318 kg) lighter than its predecessor and is the first truly high-volume, mainstream vehicle to be made mostly of the light metal.

Almost 50% of the nearly 900 automotive engineers and designers responding to the survey say their companies are focused on lightweighting and use of lightweight structural materials to meet 2025 fuel-economy rules, although they emphasize continued powertrain advancements are crucial.

Engine efficiency programs and electrified powertrains were the next most popular choices on the survey, followed by adopting more diesel engines. (Multiple answers were permitted on some questions, resulting in percentages adding up to more than 100%).

However, when WardsAuto asked engineers the same question in 2011, engine efficiency and electrification topped the list. Lightweighting ranked third.

“There are probably a couple of reasons for the shift,” says Jeff Sternberg, director of DuPont Automotive Technology. “I suspect one of the reasons stems from several high-profile lightweighting examples, like the ’15 Ford F-150 and BMW i3 (electric vehicle). Another reason is the growing recognition that every pound reduced from a component can pay dividends in being able to downsize other parts of the vehicle. For example, if you take 10 lbs. (4.5 kg) out of an engine or exhaust component, you need much smaller and lighter fasteners.

“All these weight-savings contributions add up.”

Engineers and designers who subscribe to WardsAuto.com and other WardsAuto digital publications participated in the survey. Methodology, data collection and analysis were conducted independently by Penton Research, the research arm of Penton, parent company of WardsAuto.

Another key finding of the automotive engineer survey, now in its fourth year, is that 66% of respondents expect 2017-2025 fuel-economy and emissions standards to become more stringent. Only 20% expects them to stay the same after an upcoming midterm review, and just 10% expects the standards to relax.

Powertrain emerged as the primary target for lightweighting (24%), followed by chassis (12%), body-in-white (11%), electrical and accessories (9%) and body panels (9%). However, comments from engineers surveyed reveal every vehicle component is being scrutinized for weight savings, from door latches to headlights.

In terms of what engineers are focusing on most to achieve lightweighting goals, aluminum not surprisingly is the first choice, favored by 27% of respondents, followed by multi-material solutions (16%), engineering plastics (13%), advanced high-strength steel (11%), advanced composites and carbon fiber (8%) and magnesium (1%). 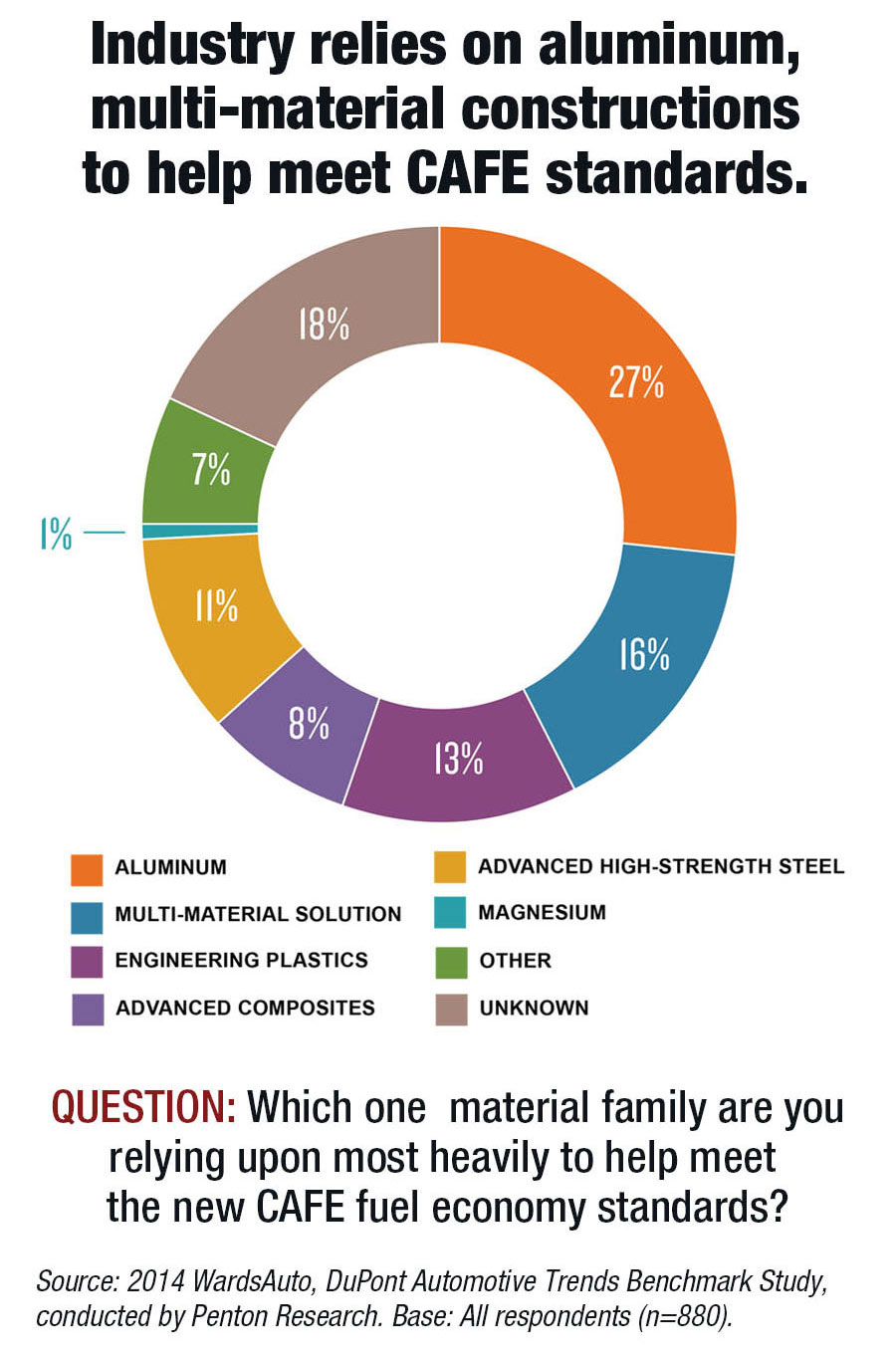 However, respondents do not express much confidence in the ability of today’s materials portfolio to help the auto industry meet 2025 CAFE standards.

In written comments, many complain the advanced composites that have the strength and light weight necessary to do the job, from carbon-fiber-reinforced plastics to carbon-titanium and aluminum metal-matrix composites, still are too expensive to be practical.

“There is no silver bullet. Every part and vehicle system faces a different set of requirements,” DuPont’s Sternberg says. “The most effective approach involves value-chain collaboration to understand the needs and develop new materials, new designs, new manufacturing methods – or all three – to find solutions.”

Other highlights from the survey: