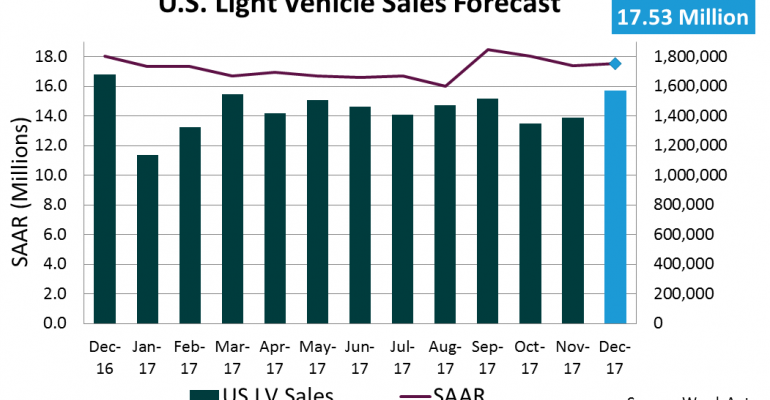 The WardsAuto monthly forecast is calling for 1.57 million light vehicles to be delivered over 26 selling days in December. The resulting daily sales rate of 60,498 units represents a 2.9% decline from year-ago (27 days). The 9.0% gain from November (25 days) is in line with average improvement between the two months recorded over the past three years.

High sales incentives are continuing, due to ’17-model stock-clearing and year-end competition. A major portion of December’s deliveries typically occurs after Christmas, meaning automakers still have an opportunity to boost discounts and holiday advertising to propel the month above expectations. However, there are fewer selling days after Christmas compared with the past two years.

Stock levels are expected to fall again in December, down 5.6% from like-2016 and 7.0% from November, to 3.66 million units.  At the projected selling rate, this results in a 60 days’ supply — a healthy level for the month based on WardsAuto estimates.

General Motors is forecast to deliver 289,000 light vehicles, a 5.8% decrease in DSR versus year-ago. Its year-to-date total is 2.0% behind same-period 2016, matching the full-industry statistic.

The forecast calls for Nissan to post a 1.6% improvement from year-ago with 149,000 sales. The company has the best year-over-year results of the top six automakers, improving 2.6%.

At forecast levels, industrywide December LV sales would bring the full-year total to 17.11 million units, down 2.0% from 2016.

The market is in a short cyclical-downturn period. WardsAuto is forecasting 16.4 million units in 2018. After that, sales will return to year-over-year gains, likely reaching a 17+ million total in 2021 before another retraction begins.