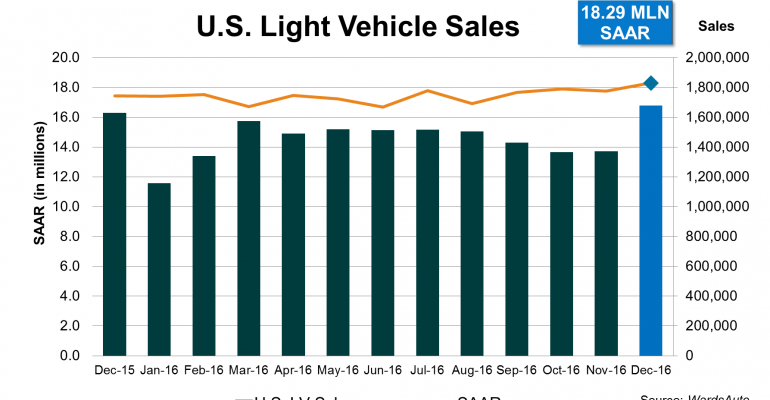 An indicator of where much of the December incentive push was focused was the somewhat better results in cars when compared with the first 11 months of 2016.

As expected, heavy holiday promotions at the end of December lifted U.S. light-vehicle sales above the month’s forecast and ensured 2016 would be the best year on record.

With dealers sitting on bloated inventory, the primary reasons for December’s exceptional results were higher incentives and an uptick in estimated fleet deliveries. However, despite December’s strong finish, inventory still is heading into 2017 an estimated 4% to 5% higher than a year ago.

Despite one less selling day, and as testament to the heavy discounting, December’s raw volume also was above the year-ago total (1.630 million units). In fact, both December’s volume and DSR were best-ever totals for the month.

As the industry leader, General Motors appeared to be the main spark among automakers for December’s results. Based on its DSR, GM’s sales rose 14.0% from same-month 2015, its highest year-over-year gain since December 2014, and market share of 19.0% was its best for the month since 2010. GM’s Q4 market share of 18.8% was it best quarterly total since Q3 2011.

However, GM was not the only automaker with strong year-end results. Honda, Jaguar Land Rover, Nissan, Subaru, Volvo and Volkswagen/Audi all posted double-digit year-over-year gains in December.  Only four automakers – BMW, Daimler, FCA US and Mitsubishi – did not record better DSRs over the year-ago month.

Automakers posting better results for the entire year over 2015 included Honda, Hyundai, Jaguar Land Rover, Kia, Mitsubishi, Nissan, Porsche, Subaru, Tesla and Volvo. Only two automakers posting increases – Honda and Nissan – are among the Top 6 producers, which account for three-fourths of the market. FCA US was down 0.4%; Ford, 0.2%, GM, 1.3%, and Toyota, 2.0%.

Although heavy incentives certainly helped boost trucks, an indicator of where much of the push was focused was the somewhat better results in cars when compared with the entire year.

Car deliveries declined 1.9% year-over-year in December, but two segment groups recorded increases. Small Car rose 2.5%, which was only the third gain in 2016 for the group. Deliveries in the Large Car group were up (3.5%) for the first time since March.

Additionally, the two biggest Luxury Car segments – Low and Middle – recorded gains in December after posting heavy losses throughout much of the year. However, Middle Car was down 6.0%, the group’s 11th straight decline.

Except for a 16.6% nosedive in Small Vans, which was the sector’s fifth straight decline, all truck segments increased sales in December from the same year-ago month.

Sales of pickups increased 6.5% in December and 5.9% for entire-2016. However, most of the growth was in the Small Pickup segment, which increased 26% in December, while Large Pickup was up a tepid 3.5%.