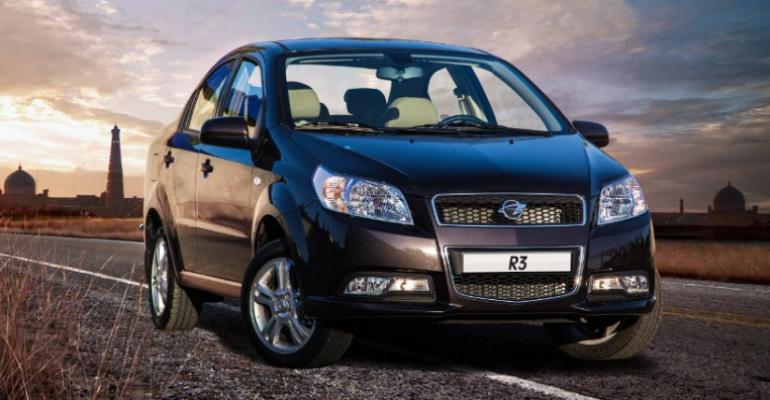 Plans to sell Chevrolet-branded vehicles in Russia come after General Motors stopped selling cars in the country in 2014 and ceased manufacturing operations there the following year.

The move comes after GM stopped selling cars in Russia in 2014 and ceased manufacturing operations in the country the following year.

UzAuto Motors, the successor to the GM Uzbekistan JV, this month began selling Chevrolet Spark, Nexia and Cobalt small cars in Russia under an export agreement with the U.S. automaker, acting general director Rustan Rajabov says. The cars are being produced at the UzAuto plant in Asaka in Uzbekistan, a former Soviet republic located north of Afghanistan.

UzAuto already sells GM-engineered, Uzbekistan-built small cars in Russia under the Ravon brand, but sales of those slow-selling, unsuccessfully marketed models will be suspended in May or June.

The export agreement with GM will allow UzAuto to sell Chevrolet-branded vehicles in all its export markets, not just Russia. Besides Russia, UzAuto exports vehicles to Ukraine and other former Soviet states including Kazakhstan, Tajikistan, Belarus and Azerbaijan, as well as Afghanistan and some Middle Eastern and African countries.

GM Russia officials say they will cooperate with those dealers but otherwise will remain focused on selling niche models in Russia – U.S.-built Cadillacs and Chevrolet Camaros, Corvettes and Yukons.

Sales projections for Chevrolet in Russia have not been offered. Before GM exited the market in 2014, annual sales ranged between 200,000 and 230,000 units, making Chevrolet one of the best-selling brands in the budget segment of the market.

But a rapid increase in prices for most Chevrolet models was accompanied by a significant drop in Russian sales – 71% year-on-year in the first two months of 2015 alone. The sales decline was one of the major reasons GM halted manufacturing in Russia that year, and decided to concentrate on selling lower-volume, higher-priced SUVs and sports cars.

Some analysts believe Chevrolet will face serious competition in Russia from rival automakers, many of which have significantly strengthened their positions in the local market since 2015. Competing models likely will include the Volkswagen Polo and Hyundai Solaris.

The analysts also say pricing will be a key to how many Chevrolets UzAuto sells in Russia;

as imports, the cars will be subject to utilization fees and excise taxes.

UzAuto built a record 271,000 vehicles in 2019 cars at its three Uzbekistan plants, and intends to increase that total to 300,000 this year. If the Chevrolet-branded cars sell well, the automaker may expand the range to include CUVs such as the Tracker.