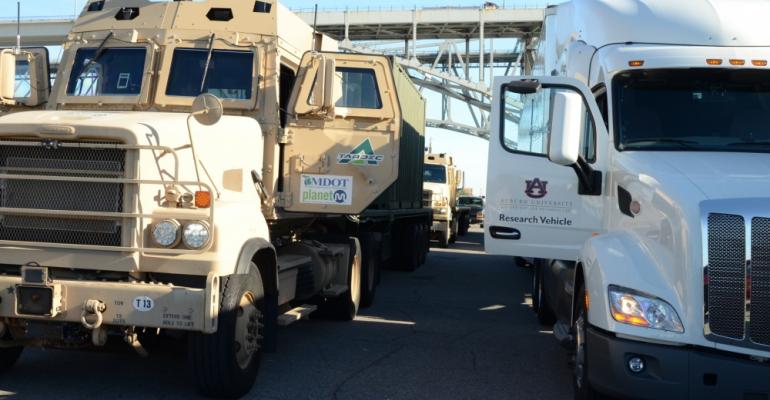 The four-truck platoon used a &ldquo;leader-follower&rdquo; strategy, with the lead commercial vehicle, under the control of an actual driver, sending steering, acceleration and braking commands to those behind.

PORT HURON, MI – A test of U.S. military and commercial cargo-truck-platooning technology conducted on the Blue Water Bridge linking this city on the St. Clair River with Sarnia, ON, Canada, was completed Oct.5 without a hitch.

“It was flawless,” says Paul Rogers, director of the U.S. Army Tank Automotive Research, Development and Engineering Center (TARDEC), which is developing the autonomous technology aimed at saving lives and injuries in combat by reducing the number of soldiers necessary to drive the trucks.

Rogers says the exercise is believed to be the first involving remotely connected trucks crossing an international border.

The Blue Water Bridge actually comprises two bridges connecting the U.S. and Canada. The first opened in 1938. The second was added in 1997. TARDEC chose the crossing to evaluate the efficiency of the trucks’ electronics under a steel “cage”—the bridge’s superstructure.

The platoon consisted of two flatbed Army trucks and two commercial truck-trailers supplied by Auburn University’s Samuel Ginn College of Engineering, which has worked with TARDEC for 12 years on various projects.

The four-truck platoon used a “leader-follower” strategy, with the lead commercial vehicle, under the control of an actual driver, sending steering, acceleration and braking commands to those behind.  Number two was an M915 tractor carrying flatbed trailers loaded with cargo containers, followed by another commercial truck and trailer.

Bringing up the rear was an M915 tractor with a load similar to the first Army vehicle. There was a driver aboard, “but he was only along for the ride,” says Bernard Theisen, a TARDEC ground-vehicle-robotics expert.

Both Army vehicles were equipped with TARDEC's Autonomous Mobility Applique System technology which enables a full range of capabilities from driver-warning features to semiautonomous operation, which can move the vehicle along a path using pre-programmed waypoints.

All of the trucks communicated with each other using DSRC (dedicated short-range communications) technology, Theisen says. DSRC provides information involving the distance between vehicles, navigation and safety alerts, he says.