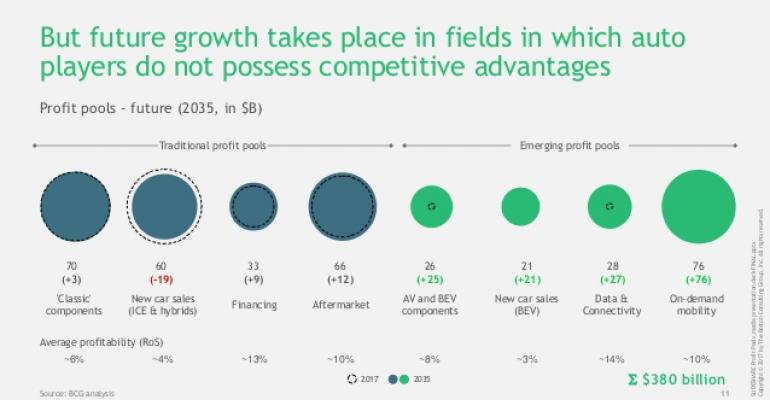 An estimated 40% of industry profitability will be derived from electric vehicles, autonomous vehicles and on-demand mobility services by 2030, BCG says. Existing automakers and suppliers need to act now if they are to get a piece of that action and survive.

TROY, MI – The automotive supply chain will undergo a huge shift in the next 10-15 years that will see some 40% of the industry’s profitability coming from market sectors and technology trends barely visible today, according to The Boston Consulting Group.

And that means existing automakers and suppliers need to recalibrate quickly in order to get a piece of that action and survive.

The three drivers of this huge swing: electrification, autonomous driving and shared mobility, sectors that today combine for just 1% of industry profits, BCG says in new research released today. The profit pool from those emerging markets will grow to 17% of total industry income in 2025 before reaching the 40% mark in 2035, the consultancy says.

That means only 60% of industry income will come from today’s more traditional product lines and market sectors, BCG says, so automakers and suppliers must move fast if they are to ward off massive erosion to their bottom lines.

“Incumbent automotive OEMs and suppliers need to lay the groundwork today in order for their companies to thrive in a market that will undergo fundamental changes over the next 15 years,” says Thomas Dauner, global leader of BCG’s automotive practice and a coauthor of the research on future automotive profit pools.

In addition to the steady march toward new profit centers, automakers and suppliers will be faced with declining new-vehicle sales that will eat away at profitability further. BCG says global volume will continue to grow through 2025, mainly driven by China and other developing markets.

“(But) the industry that has been growing over a century, will actually stall (in 2030),” Dauner says, adding global new-vehicle volume even will begin to decline by 2035 as autonomous-vehicle technology and ride-sharing take a firmer hold on the mobility market. “It’s a paradigm shift that we see (coming).”

That doesn’t mean the industry won’t continue to see revenue growth or maintain profitability overall, BCG says. It forecasts total global revenues of $5.8 trillion in 2035, up from $3.7 trillion last year. Profits will swell to $380 billion by then, compared with $226 billion in 2017.

“But all the new growth is in fields outside where the industry is today,” Dauner points out. “Forty percent of the profit is not in the direct area where the traditional players are actually in.”

To keep pace with the seismic market shifts, automakers and suppliers will need to invest more than $900 billion in AV technology, battery production, vehicle-charging infrastructure and mobility fleets by 2030, when it expects half of new vehicles sold to be electric powered (including hybrids) and 10% to be self-driving. Investment in those sectors will need to reach $2.4 trillion by 2035, BCG says.

Although AVs are expected to be in use by 2020, BCG says they won’t be around in any real measurable way until 2025. Even then, cost of the technology – expected at about $10,000 per vehicle – will restrict availability to purchasers of higher-end brands.

“If I have a Mercedes, I can consider doing that; if I buy a cheap VW, maybe that’s too expensive,” Dauner says at BCG’s Detroit-area office here, adding that price tag will drop to less than $3,000 per vehicle by 2035. That’s when BCG sees autonomous-vehicle penetration at 23% worldwide, with sales split fairly evenly between personal use and mobility-fleet customers.

OEMs are expected to account for a much smaller share of the component value in each vehicle as all this new technology rolls out, with penetration falling to 15% in 2030, compared with 27% in 2015.

Coupled with a growing reliance on fleet customers who will demand more competitive pricing, that will shrink the return on sales for automakers by one percentage point in 2025, compared with current levels. OEMs also will get squeezed from the other side, with BCG forecasting capital expenditures as a percentage of revenue will increase one percentage point as well.

“OEMs face a double-whammy challenge of needing to make investments in these growth areas at the same time that their margins in their core business are declining, says Michelle Andersen, a BCG partner and a co-author of the research.

The consultancy sees electronics and software suppliers becoming stronger, with OEMs in even tougher battles with suppliers and tech giants to maintain a grip on their customer base and capture their data. Cities also will play a bigger role in shaping the mobility agenda, potentially restricting traffic to electrically powered autonomous vehicles or even outlawing personal-use vehicles altogether.

“Cities will be a new stakeholder in the industry that has not been relevant in the past,” Dauner says.

BCG analysts admit they are unsure how this will all shake out and which companies or business sectors will be most likely to control the on-demand mobility industry in the future.

While automakers will be squeezed on all sides of their business model, from technology suppliers at one end and mobility service providers at the other, they currently have several early advantages if they can capitalize on them: They make the vehicles needed, maintain a direct line to the customer, understand logistics and, in many cases, have captive finance arms that could help them transition into more services-oriented businesses.

But at this point, it’s anyone’s game to win, the consultancy says.

“Who will move into that space?” Dauner asks. “Is it Uber, and they learn how to manage of fleet of assets when the drivers are gone? Is it (General Motors), which has (a connection to) Lyft and some EV assets? Will it be Delphi, which just bought (self-driving car developer) nuTonomy?”

Adds Andersen: “Who is actually good at doing the things (needed to support an on-demand mobility business), is an open question.”

Likely winners in this overall market transition include battery-cell producers and AV technology providers. Potential losers include suppliers of combustion-engine parts, automakers without a strong position in the EV market and dealerships that don’t expand their service offerings, BCG says.

“We expect there will be a huge transformation of the industry over the next 10 years, 15 years,” Dauner says. “Much bigger than many still anticipate today.”