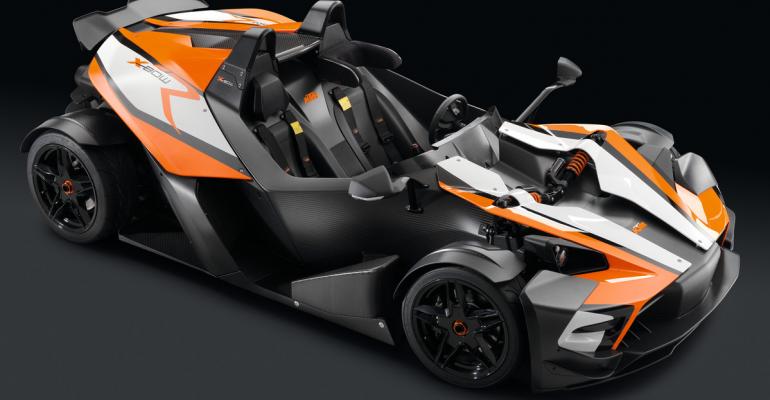 Austrian Sports Car to Be Instant Rarity in U.S.

KTM CEO Stefan Pierer says the automaker expects to sell about 15 cars in the U.S. in 2017 and reach annual sales of 30 to 40 vehicles in the future. Last year KTM manufactured some 80 sports cars.

VIENNA – KTM Sportcar will launch shipments of its KTM X-Bow to  the U.S. next year, CEO Stefan Pierer says at the presentation of the 1,000th ultralight sports car built in Graz, Austria.

Pierer says KTM expects the first X-Bow 2-seaters adapted for North America will arrive in the U.S. and Canada in spring 2017. The U.S.-bound version will be based on the base-model X-Bow R.

The automaker plans to establish a North American subsidiary and create a small exclusive dealer network for its track day car. The first contacts in the U.S. are operators of racetracks who plan to buy fleets.

According to Pierer, KTM expects to sell about 15 cars in the U.S. in 2017 and reach annual sales of 30 to 40 vehicles in the future. Last year KTM manufactured some 80 sports cars.

“We had to radically downsize and adjust our KTM X-Bow project three months after the launch in 2008,” Pierer tells the Austrian newsletter Auto-Information.

During the economic crisis, “the X-Bow project was adapted so that it is now successful,” he says. “Because of the writing off the investment and tools, the production makes profit.”

The portfolio includes four versions. The X-Bow R makes 300 hp, while the X-Bow RR racing version generates 360 hp. A  KTM X-Bow GT with a small windshield and 300 hp and a GT4 closed racing car with 360 hp are also available. The GT4 is distributed by KTM’s German partner Reiter Engineering.