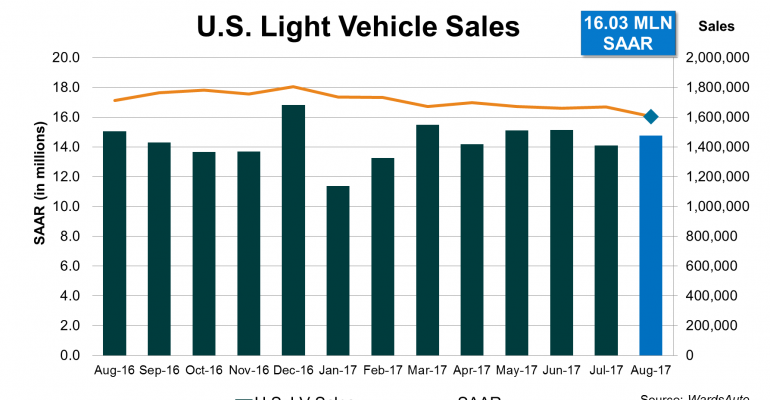 August&rsquo;s results made it much more problematic that volume for 2017 will breach the 17 million-unit level for the third straight year.

Although Hurricane Harvey, which devastated much of the Gulf Coast in the latter part of the month, played a part in curtailing results, U.S. light-vehicle sales in August disappointed again by finishing below expectations.

Though still too early to determine accurate losses, August’s seasonally adjusted annual rate of 16.0 million units probably is 100,000 to 200,000 units lower because of the hurricane.

However, even accounting for the storm losses, sales finished significantly below the 16.5 million-unit SAAR expected for the month. It was the lowest SAAR since 15.6 million units in February 2014.

Estimated totals for both retail and fleet volume were well below year-ago, although the retail share was higher than like-2016.

Based on initial estimates for the month by ALG, industry incentives increased 12.7% from August 2016, while average transaction prices rose less than 1%.

August’s results also made it much more problematic that volume for the entire year – even considering there might be some make-up in the fourth quarter from the storm losses – will breach the 17 million-unit level, as it did the past two years. The year-to-date SAAR stood at 16.8 million units, down from 17.3 million in both the same periods in 2016 and 2015.

Apparent moves to unload some ’17-model inventory boosted results for some automakers, but at the expense of others.

General Motors sales increased in August for the first time since March, while Toyota, after posting declines every month this year through May, recorded its third straight gain in August since it quietly began raising incentives, and trimming stocks, in June.

Dealer stock totals for both automakers are primary reasons industry inventory is well above the level needed for demand.

As has occurred in the past when leading volume sellers goose incentives to cut inventory, other automakers in August did not follow suit by jacking up incentives enough to stay in lock-step with GM and Toyota.

Despite six year-over-year increases during January-July, Nissan’s sales tumbled 16.3% year-over-year in August, and its 7.3% market share was its lowest since April 2013 (6.8%). Nissan has been running some of the strongest incentives the entire year, helping it make solid gains, but the sudden pick-up in price-cutting by other manufacturers stalled its streak, at least for August.

Honda recorded a sharp 6.0% decline in August after two consecutive increases – although some vehicles with hefty inventory, such as the Honda Civic and HR-V, performed well.

Among the other major players, both FCA US and Ford continued volume and market share slides by posting year-over-year declines of 13.9% and 6.6%, respectively.

Among the remaining manufacturers, only Mitsubishi, Subaru, Volvo and Volkswagen Group recorded increases.

Hyundai’s 27% downturn in August was its fourth straight decrease. Declines in that period have averaged 23%. Kia’s 5.3% dip was its eighth-straight drop.

After averaging year-over-year increases of 25% for over a year, Jaguar land Rover’s sales declined for the second straight month in August.

Bucking the trend is Subaru, which recorded its 17th consecutive increase, and posted market share of 4.3%, up from year-ago’s 4.0%. In fact Subaru, surpassed Hyundai in August to the No.7 ranking in total volume.