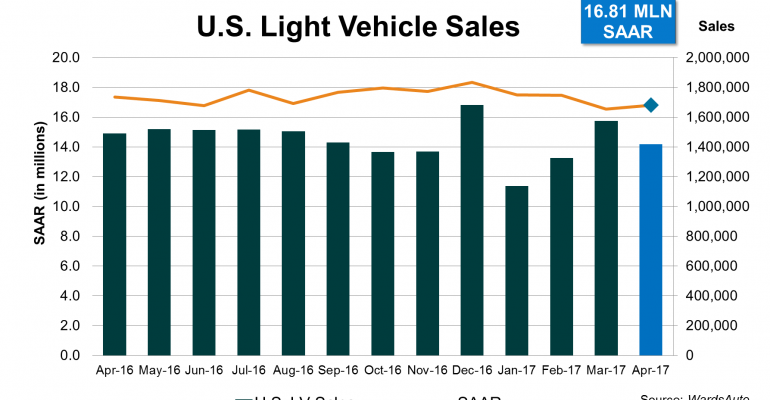 U.S. light-vehicle sales in April continued to weaken compared with last year, as even the strong part of the market, trucks, showed signs of cracking for the second straight month.

In fact, although demand was forecast to drop from a year ago, sales did not rebound as much as expected from March’s seasonally adjusted annual rate, which fell to a 25-month low.

Estimated splits for both retail and fleet volume were down from a year ago for April and in the year-to-date totals.

An initial estimate from ALG shows incentives increased 13.9% in April from a year ago, the smallest rise since 8.9% in August. Average transaction prices also increased in April, but by a much smaller 1%.

Trucks continued to outshine cars, boosting penetration in April to 62.1% from like-2016’s 59.2%. The DSR for trucks increased 3.7% from April 2016. Except for a decline last November when results went against a strong year-ago total enhanced by heavy incentives, trucks have not declined from the same year-ago month since 2010. But that could change if more truck segments start to weaken.

Year-to-date truck deliveries through April were 4.4% above year-ago. Cars declined 8.3% in April, and year-to-date volume was 12.2% below year-ago.

Although trucks remain well above 2016 in year-to-date volume, April marked the second straight month that some previously strong segments recorded slower demand on a year-over-year basis.

For the second straight month the Small CUV and Large Van segments posted declines. Also, Small Pickup, after recording its first decline in 31 months in March, rebounded to a lukewarm 1.5% gain, which was due entirely to the new Honda Ridgeline. Less the Ridgeline, the segment declined 7.0%.

Furthermore, Large Pickups slipped below year-ago for the first time since August. Small Van continued a slide that began last summer, while SUVs declined for the first time in 13 months, with a big downturn in luxury versions for the second consecutive month.

Cars remained the same story as it has been for some time. All segment groups declined year-over-year in April, with midsize and fullsize models posting the biggest losses.