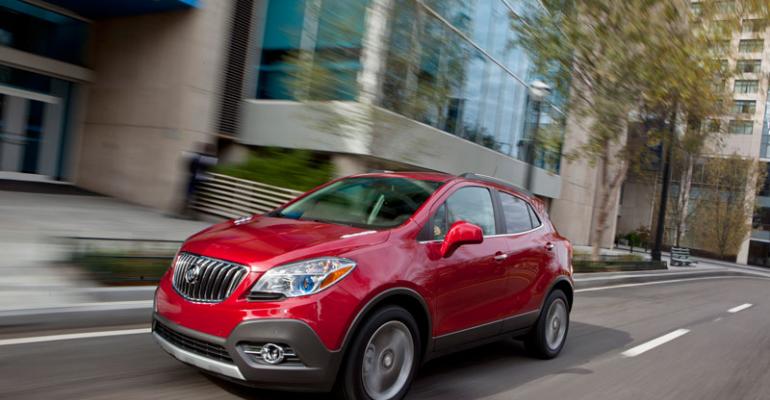 The small CUV targets young professionals moving out of a compact car or CUV and likely into their first new vehicle, as well as empty-nesters looking to downsize from their minivan or SUV.

“It is going to be a conquest vehicle, just like Verano,” Buick marketing chief Tony DiSalle tells WardsAuto during a media preview of the Encore, a pintsized CUV with a sculpted exterior design, luxurious interior and punchy 4-cyl. turbocharged engine.

The Encore arrives at U.S. dealers in the first quarter from its single-source assembly plant in Bupyeong, South Korea, with a base price of $24,950 and few direct competitors.

The similarly sized Volkswagen Tiguan and Mini Countryman will be the closest rivals to the 5-passenger Encore, as might the more-expensive BMW X1, which launched this year in the U.S., and an Audi Q3 widely expected in 2013.

Otherwise, the Encore occupies white space, charged with attracting young professionals moving out of a compact car or CUV and likely into their first new vehicle, as well as newly minted empty nesters looking to downsize from their minivan or SUV.

Either way, DiSalle bets the Encore will follow the success of the Verano, which GM introduced late last year as a ’12 model. The 5-passenger sedan is blazing a new segment with its combination of compact specifications, elegant exterior and richly appointed interior.

According to DiSalle, 52% of Verono purchasers are new to GM, while 43% of the Enclave large CUV, introduced in 2007 and redesigned for ’13, are conquest buyers.

As a brand, Buick has grown into a Greek Argonaut in its quest for GM, with 43% of its buyers new to the marque, up from less than 30% before the Enclave launched. Half of the brand’s new customers come from foreign makes.

“That is the mission of the brand today,” says DiSalle, who took over marketing at Buick two years ago when its portfolio comprised just three vehicles. Counting powertrain variants, the brand’s showroom will boast nine models when the Encore goes on sale.

Buick’s U.S. sales in the first 11 months were relatively flat compared with year-ago at 163,935 units, according to WardsAuto data. But with the new Enclave arriving at dealers last month, the brand posted its best November since 2006, up 22.1%. Enclave deliveries jumped 22.8% to 4,817, with the redesigned model accounting for 30%.

The Encore, or “Baby Enclave” as it was nicknamed during development, portends a similar boost for the brand. GM data forecasts the combined small-SUV, compact-CUV and compact-luxury CUV segments in the U.S. growing by a potential 360,000 units to more than 2.3 million from just shy of 2.0 million today.

DiSalle says the Encore so far has generated twice as much consumer interest as the Verano did on the heels of its launch and currently commands 10% of traffic at Buick.com. About two-thirds of visitors to the Encore’s homepage complete their own build on the site.

DiSalle does not reveal GM’s sales targets for the Encore, saying “We’re really, really encouraged by the early response.”

The Verano to date has accounted for 32,222 deliveries since its debut, making it the third best-selling Buick behind the Enclave and LaCrosse large sedan.

DiSalle admits launching an all-new vehicle into an emerging segment comes with risk, but says GM has the manufacturing flexibility at Bupyeong to let market demand pull volume. “We’re going to sense demand,” he says. “There’s some range in what we can do.”

Early demand for the Trax and Mokka has been brisk. More than 40,000 orders have been placed for the Mokka in Europe, making it one of Opel’s most anticipated models in years. Neither the Trax nor the Mokka will be sold in the U.S.

The Encore launched in China last month, selling 6,000 units. Its order backlog is 20,000 units, GM says, giving Buick yet another model to offer in a country crazy for the brand.

U.S. advertising for the Encore will begin in the first quarter and use the annual National Collegiate Athletic Assn. basketball tournament as its primary platform, not unlike the Verano one year ago.

“The Encore broadens our portfolio and brings in a new customer,” DiSalle says. “I wouldn’t necessarily brand it a young person’s car, but it will bring younger people in and keep them for a while. It is a very important product for us.”