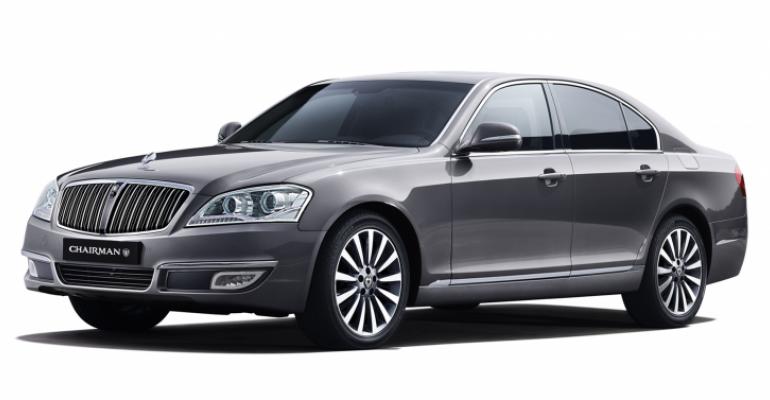 <p><strong>Ssangyong has registered the name Chairman Kaiser with Korean patent office. It is to be applied to successor of current Chairman W luxury sedan <em>(pictured above).</em></strong></p>
Industry News

Korea&rsquo;s Ssangyong, thought to be a goner by many analysts, is bringing the Kaiser name back to label the successor vehicle to its fullsize luxury sedan, the Chairman W.

Most drivers will not remember a marque known as the Kaiser, but older consumers and enthusiasts will remember the briefly popular post-World War II lineup of Kaiser-brand cars sold by Kaiser Motor between 1945 and 1955.

Along with sister-brand Frazer, they exuded opulence but quickly became outdated by the advances of their rivals, namely the Big Three automakers.

Now, Korea’s Ssangyong Motor, thought to be a goner by many analysts just a few years ago, is bringing the name back to label the vehicle succeeding its fullsize luxury sedan, the Chairman W.

However, the new Kaiser marque that will replace the Chairman W will not be a revolutionary departure from the three grades of the vehicle that are available now. In fact, it will be somewhere in between a facelift and a new model, a spokesman tells WardsAuto.

“There are many new convenience features, some interior and exterior design changes, but there will be no powertrain change,” the spokesman says.

All design, engineering and other development work was done in-house at Ssangyong’s vehicle design and development center that is integrated with its solitary vehicle assembly plant in Pyongtaek.

Like the Chairman W, the Kaiser will be available with the 3.2L and 3.6L DOHC inline 6-cyl. engines that Ssangyong produces at its own plant in Changwon. The top trim model will be powered by a 300-hp 5.0L SOHC V-8 imported from Mercedes-Benz. All three models will be equipped with a Mercedes-Benz 7-speed automatic transmission.

Asked why Ssangyong chose the Kaiser name, the spokesman says “in German it means emperor, higher than a king. And like the name ‘Chairman,’ it means dignity. It is a vehicle for people who care and have dignity. It’s a good name.”

The spokesman says Chairman W sales dropped because the product was aging, and there was growing competition from foreign luxury marques, including the Mercedes S-Class, BMW 7-Series and Audi A8.

It is rumored the Kaiser may be displayed at the Busan International Motor Show in June.

No production or sales launch date has been disclosed.

Tivoli a Hit, Ssangyong Doubles Down With Diesel
Jul 23, 2015