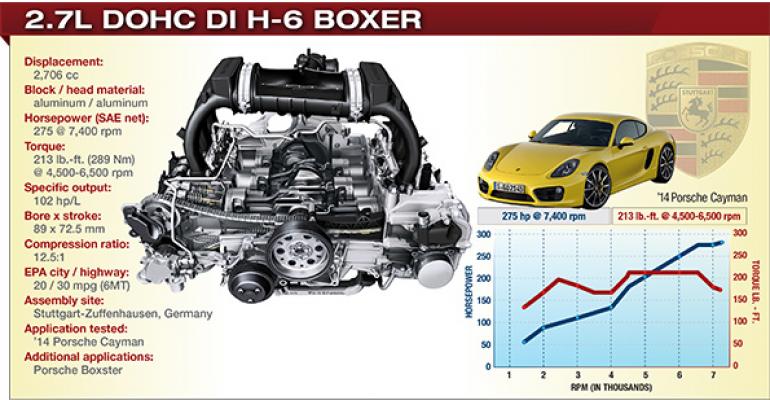 Porsche 2.7L boxer 6-cyl., which is standard and not an up-power option in &rsquo;14 Boxsters and Caymans, is one of the sweetest yet. &nbsp;

Subaru has used front-mounted boxer engines since its early years. Porsche has installed high-performing flat 6-cyl. engines in the rear of its 911 sports cars for half a century and counting. The German automaker also has situated its boxer engines between the axles in smaller, more affordable ’69 to ’76 model year 914 models and more recently in Boxster roadster and Cayman coupe 2-seaters.

Porsche also built H-4s for its original rear-engine 956 sports cars, early entry-level 911s (which were badged 912s) and base mid-engine 914s and even a small-displacement boxer 8-cyl. for a few rare 904 race cars.

And it now builds powerful, sophisticated V-6s and V-8s for its sedans and SUVs. But the iconic flat-6 lives on at Porsche, and 50 years after debuting in mid-1960s 911s, it keeps getting better and more refined.

Flat horizontally opposed piston engines date back more than 100 years and have been used in everything from lightweight aircraft to motorcycles. They still are popular on current BMW and Honda 2-wheelers, in part because they have some inherent advantages over inline and “V” configurations, including good natural balance and low centers of gravity. But Subaru admits they can be more expensive and require different transmissions compared with transversely mounted inline engines.

From a packaging standpoint, boxers are lower but much wider than inline engines, which (combined with their low center of gravity) makes them ideal for Porsche's rear- and mid-engine sports cars (not to mention decades of now-extinct H-4-powered rear-engine Volkswagen Beetles). And this latest 275-hp Porsche 2.7L 6-cyl. boxer, which is standard and not an up-power option in ’14 Boxsters and Caymans, is one of the sweetest yet.

Porsche says the manual-transmission Cayman can sprint from zero to 60 mph (97 km/h) in a swift 5.4 seconds, while the PDK-equipped 2.7L Cayman is a tenth of a second quicker at 5.3 sec. and quicker-still at 5.1 sec. with an optional Sport Chrono package. After testing it in a ’14 6-speed manual Cayman, WardsAuto editors called it "a perfect match" for that lightweight coupe.

Its 213 lb.-ft. (289 Nm) of peak torque @ 4,500-6,500 rpm is fairly meager by today's standards, they point out. "But engage the starter, and it becomes obvious why the new flat-6 has won Porsche's fourth Ward's 10 Best Engines trophy. Put the 2,888-lb. (1,310-kg) coupe into gear, let the engine work a little more of its aural magic, take it for a short ride through the twisties, and the point about minimizing weight while maximizing power becomes crystal clear."

In fact (keeping in mind that 911 variants sticker well over our 10 Best Engines price cap of $60,000), it's been 12 years since any Porsche engine took home a Wards 10 Best Engines award. A same-displacement ancestor of this 2.7L earned trophies in 2001 and 2002 for its then-strong performance in Cayman coupes, and a 3.2L version secured an award in 2000 when tested in a Boxster.

Today, this 2.7L flat-6 generates more than 12% better power (now up to 102 hp/L, impressive for a naturally aspirated six) and 6% more torque than the 0.2L-larger ’13 version it replaces. Yet, thanks to such efficiency-enhancing technologies as VarioCam Plus variable valve timing and variable-lift intake cam, stop/start, "intelligent" cooling and a regenerative-braking alternator that recuperates energy during coasting and braking, it is officially rated at 20/30 mpg (11.8-7.8 L/100 km) city/highway through the standard 6-speed manual gearbox.

Driving through the optional Porsche PDK 7-speed DCT, which lets the engine idle to save fuel during coasting, it's EPA-rated at 22/32 mpg (10.6-7.3 L/100 km). WardsAuto editors averaged 23 mpg (10.2 L/100 km) in a mix of driving conditions with the manual transmission despite occasional (and understandable) bursts of throttle-foot enthusiasm.

The regenerative-braking alternator recuperates energy essentially the same way an electric vehicle's drive motor does, by becoming a road-driven (kinetic energy) generator to send more charge back to the battery during coasting and braking. And when the battery is fully charged, it draws less mechanical energy from its drive belt, allowing more power for the drivetrain to enhance acceleration. Another efficiency feature is intelligent control of the combined engine and transmission cooling systems, which reduces friction and improves combustion efficiency by letting both reach their operating temperatures sooner.

Porsche engineers say the top design priorities for the engine were to increase both output and fuel efficiency while also providing a more sporting, "emotional" sound. WardsAuto editors confirm they succeeded in all three dimensions.

Engineers also say one of the toughest challenges in meeting those goals was optimizing the gasoline direct-injection system for maximum efficiency, which they accomplished partly by going to multi-hole injectors.

Another challenge was reducing friction while increasing the engine's maximum (redline) speed to 7,800 rpm from the previous version's 7,500. While its power peak arrives at a slightly lower 7,400 rpm, which is 200 rpm higher than its 2.9L predecessor, it generates more output at identical engine speeds all along its power curve.

A third hurdle was further optimizing the oiling system "for increased driving dynamics," meaning the sustained high cornering loads for which Porsche sports cars are famous. Among other things, they say, that involved increasing oil pressures at elevated engine speeds. Further smoothing and removing restrictions from intake and exhaust gas paths for better flow both in and out was another issue that had to be solved.

Finally, we asked whether, as delightfully responsive and fuel efficient as this modest-sized flat-6 is today, what other opportunities for further improvement remain as corporate average fuel economy requirements ramp relentlessly upward.

"We are convinced there are still measures to increase the performance and reduce the fuel consumption even more, for example through further friction reduction," the Porsche engineers predictably respond.