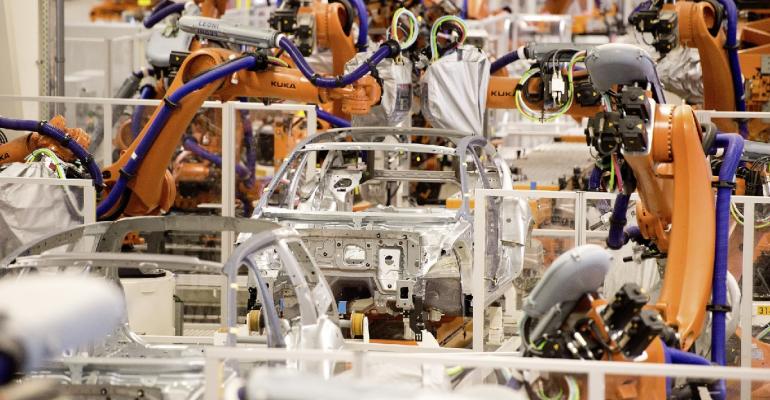 This pilot project will test whether the 5G technology meets the requirements of vehicle production with an eye toward developing it for industrial series production in the future.

Volkswagen takes a step toward its first smart factory with a plan to employ 5G connectivity in its production processes at its main plant in Germany.

It has announced that a local 5G standalone network, or “campus network,” is now available at its plant in Wolfsburg that initially covers the main production development center and the pilot hall.

This pilot project will test whether the technology meets the requirements of vehicle production with an eye toward developing it for industrial series production in the future. A dedicated 5G radio frequency will be used to safeguard secure, delay-free transmission of data.

About 5,000 robots already are working at Wolfsburg, as well as many other machines and systems and secure, delay-free transmission of data will be required in the future to control and monitor these. Latency is significantly reduced with 5G networks versus other wireless communication technologies such as WLAN.

This real-time wireless communication is expected to make many smart-factory applications possible for the first time. One scenario to be tested is the wireless upload of data to manufactured vehicles. With increasing levels of digitization and fully connected vehicles, the production process requires large amounts of data to be transmitted to the cars. 5G makes it possible to perform this much more quickly and at any time during production.

For the campus network in Wolfsburg, the company applied for and was allocated a private radio frequency at 3.7 to 3.8 GHz with 100 MHz bandwidth by the Federal Network Agency. Exclusive spectrum is a key enabler for 5G campus operations at the manufacturing site. Interference-free, high-availability wireless transmission requires a dedicated frequency that Volkswagen will use exclusively for production purposes. The network equipment for the 5G pilot network is supplied by the Finnish telecommunications group Nokia.

Meanwhile, at its Dresden plant, the automaker is setting up a “Transparent Factory,” a pilot factory for the brand that is testing technologies in normal operation for the pilot-scale ID.3 BEV series. A 5G island has been put into operation as well.

Networked control for a driverless transportation system is being developed further in collaboration with Porsche, Audi and the Dresden University of Technology. The sensors in the driverless transportation system transmit the environment data to the cloud computer. This calculates the route to an ID.3 body and sends back the information in real time. The project in Dresden is funded by the German Federal Ministry of Education and Research.

Christian Vollmer, member of the board of management of Volkswagen responsible for production and logistics, says, “We believe that 5G technology has great potential for innovation, from the use of intelligent robots and driverless transportation systems to networked control of plant and machinery in real time up to wireless software flashing of manufactured vehicles.”