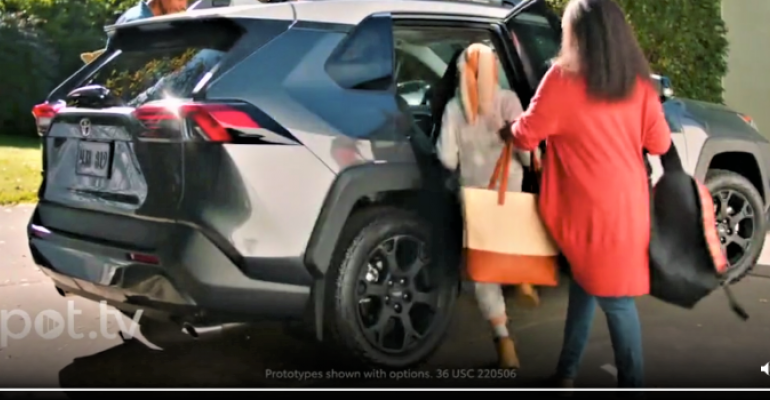 The No.1 ad for the week of June 21 is Toyota’s adventurous SUV commercial, which collected 26% of its TV ad impressions appearing during NBA Playoff games.

The No.1 ad for the week of June 21 is Toyota’s adventurous SUV commercial, which collected 26% of its TV ad impressions appearing during NBA Playoff games. According to Ace Metrix Creative Assessment survey data from iSpot, the ad generated 7.2% more attention than the norm for automotive ads in June. It was also found to be 10.5% more likeable than the norm as well, while 25% of survey respondents found the visual scenes to be the single best thing about the spot.

After two straight weeks in first place, Lexus moves to second place with its RX commercial encouraging car buyers to get the most out of life. Ace Metrix data found the spot to be 2% more watchable than the norm for auto ads in June, while survey respondents found the cycling-themed ad to be “cinematic.” iSpot data shows more than 13% of TV ad impressions for the ad came during reality programming.

Brie Larson’s “arresting” (to quote one Ace Metrix survey respondent) Nissan creative remains in this ranking due at least in part to the ad’s likeability. Ace Metrix data shows the spot was 8% more likeable than the norm for auto brand commercials in June, and garnered 9.4% more attention than the norm, too. It also prompted brand recognition of 97% (meaning viewers overwhelmingly remembered the ad was for Nissan after watching it); that’s 26% higher than the norm.

Subaru occupies the final two spots in this week’s ranking. The first ad drew notice from viewers with its focus on safety, as Ace Metrix data shows it received 16.6% more attention than the norm for auto ads in June. Survey respondents found the commercial to be “heartfelt,” and 27% thought the message was the best thing about the ad.

Closing out the ranking is Subaru’s pet adoption spot, which is among the most-seen auto ads for the third week in a row. iSpot data shows 92% of its TV ad impressions came from cable programming, led by SYFY (7.25%) and ESPN (7.24%). Primetime shows accounted for 32% of TV ad impressions from June 21-27, though Sunday was the biggest day for impressions at 18.1% of the total.