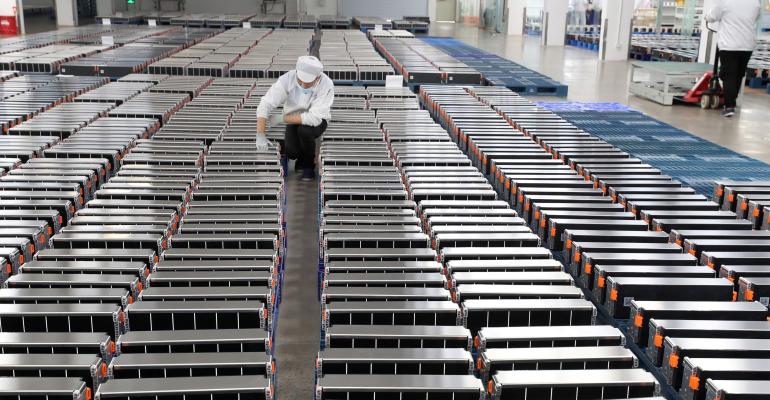 From raw material supplies to the massive amount of investment required, U.S. automakers have problems to solve if aggressive battery-electric-vehicle production plans are to be met.

“The battery market is looking to grow at somewhere around the 34% compounded annual growth rate, which is massive demand growth of over somewhere between $100 and $300 billion worth of investment by the year 2030,” he says. “That's a massive amount of money to be spent on a new industry.”

Galyen, who is chairman emeritus of NATTBatt International, adds: “It is an interesting dilemma we’re in, because many parts of the world are expecting electrification to change very rapidly. And they’re talking about some crazy numbers of conversion from ICE (internal-combustion-engine) to electric vehicles. But with that comes a great deal of money that has to be spent to industrialize it.

“Governments are scrambling on what to do and how to do it,” he says. “Countries around the world are trying to figure out what is the right business model to follow, what kind of incentive package is needed, what kind of taxation should be levied against the vehicles and how do we put the money where they get the best value.”

Other factors on Galyen’s list of growing pains are uncertainties about battery chemistries and whether to use nickel-manganese-cobalt, lithium-iron-phosphate or something else altogether, along with the need to invest in infrastructure. “Charging capacity deficiencies can be a real problem for us,” he says.

On the issue of industrialization, Galyen notes that building materials represent a major potential obstacle.

“We keep talking about all these battery plants going up, but building materials are becoming scarce,” he asserts. “Just the structural steel needed is a roughly 50-week lead time depending upon your purchasing power. Then there’s concrete wall and roofing material. There’s not enough of both. These factories are huge.”

The issue of China and the economic threat it poses to the U.S. was a recurring theme at the conference.

“Why is China so far ahead?” Galyen asks. “Because they’ve been doing this for 20 years. Early on, they figured out how to mine and process key materials and build a supply chain.”

James Frith, a principal at Volta Energy Technologies, warns that “having all of the battery supply chain in China without having domestic resources is dangerous and puts the push for electrification at risk.

“It’s only several months since China had its last lockdown,” he says. “Shanghai was effectively shut down as was Tesla. In a region like China, where you have tens of thousands of workers working in these facilities, this is quite precarious and creates a lot of uncertainty over what material demand will look like.”

And it’s not just China creating uncertainty, Firth says. “The war in Ukraine, particularly for Europe, is creating huge difficulties around energy prices, and that’s having an effect on the battery industry.”

Anthony Burrell, chief technologist at the Energy Storage and National Renewable Energy Laboratory, paints an even starker picture when one looks at subcomponents.

Burrell warns that China currently holds 63% and 83% shares of global cathode and anode production capacity, respectively, compared with 0.7% and 0.6% for the U.S. And the situation is only slightly better for separators and electrolytes, with China holding 66% and 69% shares, respectively. The U.S. share: 3% and 7%.

“These are huge gaps,” he says. “But more importantly than China’s dominance is the risk that if something happens to disrupt the supply chain, if the region is devastated by a flood, a disease or political unrest, we would find ourselves in a situation where we wouldn’t be able to secure the necessary supplies.”

And looking at materials, he points to manganese. Although produced in vast scales around the world, the metal is refined for batteries almost exclusively in China. “While manganese is a global commodity, the refining capability is located in a single country in a single region. This is a huge vulnerability,” he warns.

Against the backdrop of the Inflation Reduction Act and Infrastructure Investment and Jobs Act, two important Biden Admin. initiatives, disagreement broke out about how best to build a competitive and sustainable supply chain in the U.S. and to what extent to involve China.

“We are now in an era where electrification is going to take off and (perceptions of) capital risk will be down,” says Sue Babinec, program lead for grid storage at Argonne National Laboratory.

Then in response to Galyen, who posits that the U.S. should “learn” from the Chinese, Babinec says: “We should invite China to participate but make it clear that that this is a new game. This is our territory. We shall do what we have to do to make sure that the United States does not have to rely upon anyone for critical materials.”

Ben Wrightsman, president and CEO at the Battery Innovation Center in Newberry, IN, takes a more measured view. “How do we have globalization and compete and cooperate at the same time? At present, we don’t have the competition here in the U.S.,” he says.

Kurt Kelly, vice president-commercialization at Sila Nanotechnologies, adds: “By the end of the decade we should be able to produce at least 90%. That’s a realistic target. And it’s also the upstream material suppliers, not just cells, just getting that supply chain very robust and not being reliant on countries of concern.”