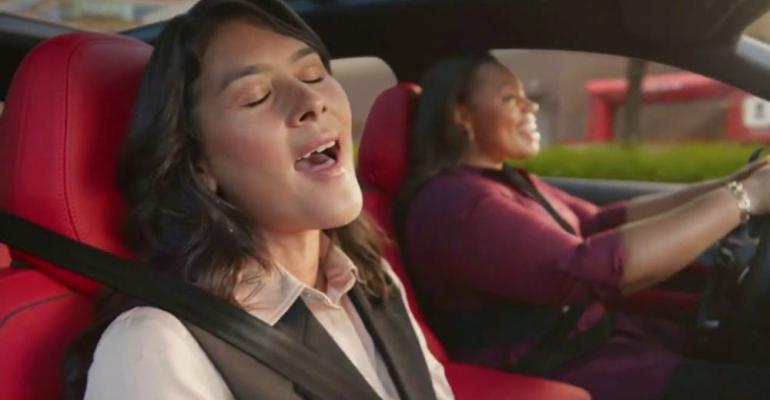 Subaru is the brand with the highest total combined impressions from two highly-seen spots, according to iSpot.tv.

Chevrolet’s ad for its electric vehicles moves from second to first place in iSpot.tv’s ranking of the most-viewed auto ads. An 85.2% week-over-week surge in estimated TV ad spending delivered a 22.7% increase in impressions, primarily driven by NFL, MLB and college football games.

Per an iSpot Ace Metrix survey, the ad had a Brand Match rating of 84%, referring to the percentage of surveyed viewers who remembered it was a Chevrolet spot after watching it.

Subaru owns two spots on the chart, in second and fourth place, with a combined total of over 378 million TV ad impressions.

The second-place ad, featuring a lonesome dog panting on an empty road, tugs on the heartstrings. Subtitles explain that many special-needs shelter dogs wait years to be adopted – and “this is how it feels to wait for less than a minute.” (The ad urges viewers to join Subaru for National Make A Dog’s Day.) In fourth place: Subaru’s enduring spot for the Forester Wilderness, featuring a rugged man exploring the great outdoors.

For both Subaru ads, Good Morning America delivered top impression counts, and neither appeared during professional sports during the week measured.

Dodge’s spot “The Real Brotherhood of Muscle” takes third place for TV ad impressions, with NBC delivering twice as many as the second-place network, Fox News. Although during the previous week the spot benefited from airings during Major League Baseball games, this time around news programming including Today (3rd Hour) and Today drove impressions.

Week-over-week chart newcomer Acura rounds out the ranking with an electrifying ad for the MDX Type S. NFL and MLB games delivered top impression counts.Per Ace Metrix, an impressive 44% of viewers considered the visual scenes the single best thing about the spot.

3. Dodge: The Real Brotherhood of Muscle