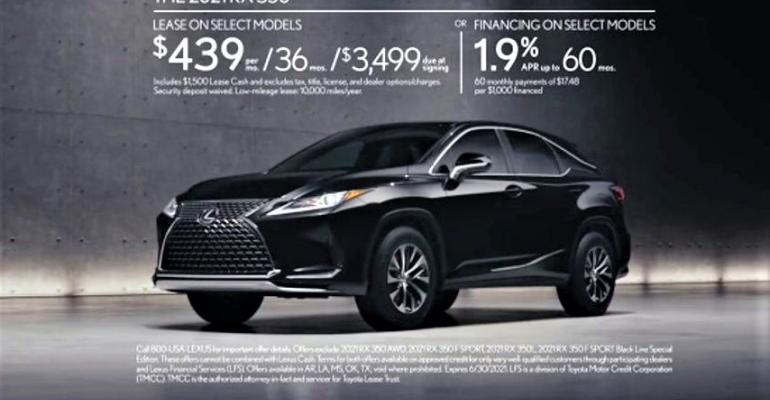 In the top ad for the week of June 14, Lexus encourages car buyers to strive for more – aided by the brand’s RX midsize luxury CUV in the pursuit of that goal.

For the second consecutive week, Lexus sits at No.1 in iSpot.tv’s ranking of the most-viewed automotive commercials – the ads that have generated the most impressions across national broadcast and cable TV airings.

In the top ad for the week of June 14, Lexus encourages car buyers to strive for more – aided by the brand’s RX midsize luxury CUV in the pursuit of that goal. According to Ace Metrix Creative Assessment survey data from iSpot, 37% of respondents found the visual scenes to be the single best thing about the commercial. Said one respondent: “I liked that it reminded me to slow down, enjoy things that I like more…and to put down the cellphone!”

Nissan remains a fixture in the ranking due to its Brie Larson spot showcasing what’s new about the brand’s vehicle lineup. Looking at consumer survey data from the past 30 days, Ace Metrix reveals the ad is 8.9% more likeable than the norm for auto ads. Survey respondents found the spot to be “arresting,” with 32% saying the visual scenes were the single best thing about it.

Jeep’s fourth-place ad highlights the community that’s popped up around its brand. Ace Metrix data found that the spot generated 8.2% more attention than the norm for automotive ads in the past 30 days and was 11.6% more likeable. One survey respondent said they “loved the music and visuals.”

Promoting its SUV lineup, Toyota’s fifth-place spot leans into childlike wonder and a sense of adventure – and features cute kids dressed up like various animals. Ace Metrix data shows the ad was 10.4% more likeable than the norm for auto creative in the last 30 days and was 6.8% more watchable. Survey respondents found the ad to be “wholesome,” while 25% deemed the characters to be the single best thing about it.