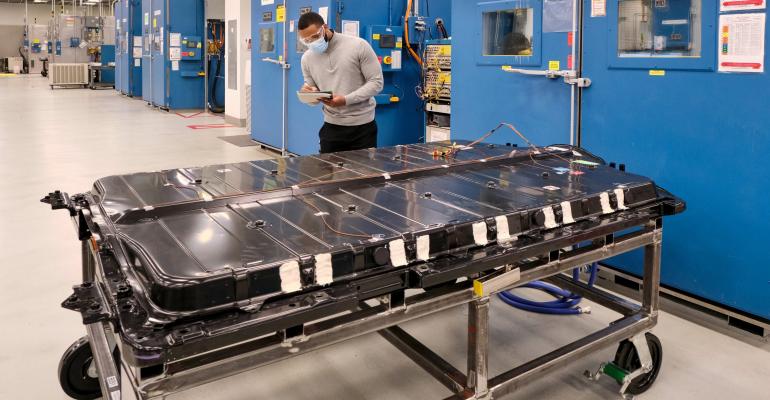 Under an agreement with Controlled Thermal Resources, lithium will be sourced in part from California from a more environmentally friendly process than traditional lithium production.

General Motors will obtain low-cost, U.S.-sourced lithium for its electric-vehicle batteries under an agreement with Controlled Thermal Resources (CTR).

The metal will be produced throught a closed-loop, direct extraction process that GM says results in a smaller physical footprint. There is no production tailing and lower carbon dioxide emissions when compared to traditional processes such as pit mining or evaporation ponds, GM says in a statement.

The agreement between GM and CTR is expected to accelerate the adoption of lithium extraction methods that cause less impact to the environment. GM says a significant amount of its future battery-grade lithium hydroxide and carbonate “could come” from CTR's Hell's Kitchen Lithium and Power development in the Salton Sea Geothermal Field, located in Imperial, CA, about 100 miles (161 km) northeast of San Diego.

GM says it isthe first company to make a multimillion-dollar investment in CTR's Hell's Kitchen project, which will recover lithium from geothermal brine. The automaker will have first rights on lithium produced by the first stage of the Hell's

Kitchen project, including an option for a multiyear relationship.

“Lithium is critical to battery production today and will only become more important as consumer adoption of EVs increases, and we accelerate towards our all-electric future,” says Doug Parks, GM executive vice president-Global Product Development, Purchasing and Supply Chain.

“By securing and localizing the lithium supply chain in the U.S., we’re helping ensure our ability to make powerful, affordable, high-mileage EVs while also helping to mitigate environmental impact and bring more low-cost lithium to the market as a whole.”

Lithium is a key battery material used in the cathodes of cells in GM BEVs such as the Chevrolet Bolt EV and Bolt EUV. The metal will become even more important in battery use as GM explores lithium-metal batteries with a protected anode, the automaker says.

Most lithium used in lithium-ion batteries is currently mined and processed outside of the U.S., raising concerns about access. According to The Wall Street Journal, the U.S. accounts for just 1% of global lithium mining and processing, while China mines 10% of the world's lithium and processes more than two-thirds of the raw metal.

The first stage of the Hell's Kitchen project is expected to begin yielding lithium in 2024, helping GM meet its goal of eliminating tailpipe emissions from light-duty vehicles by 2035.

In a recent article on The Holtville Tribune website, CTR’s CEO Rod Colwell said his company is looking to extract just under 40,000 tons of lithium annually from the Imperial Valley project, with the first phase of Hell’s Kitchen set to come online in 2023. CTR says the total inferred lithium resource at the Salton Sea is about 2.7 million tons and the company could recover 300,000 tons per year.

Chile has the largest proven lithium reserves in the world and two companies operating at its Salar de Atacama salt flat reportedly produced 74,900 metric tons of lithium carbonate equivalent (LCE) in 2017, but mining lithium there is controversial due to massive quantities of water that must be trucked in to the dry desert area.