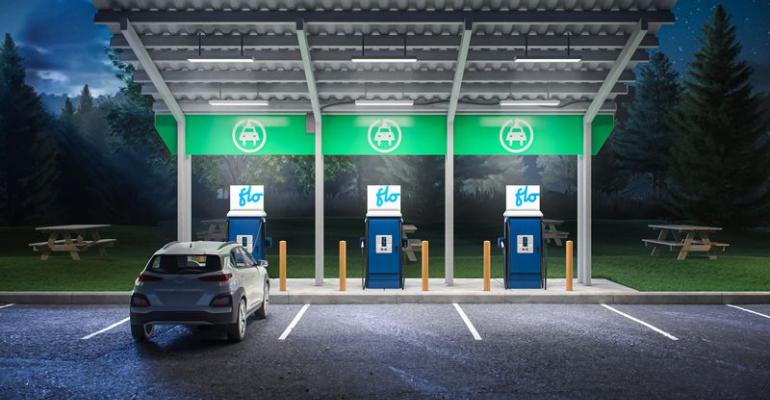 General Motors and its dealers are installing 40,000 public Level 2 EV chargers as part of a $750 million commitment to invest in EV charging infrastructure.

General Motors, which has earmarked $750 million for EV charging infrastructure, is working with its dealers and BEV charger suppliers to install 40,000 public Level 2 chargers in rural and other underserved markets, doubling the number of public charging stations in North America as part of its commitment.

Named the Dealer Community Charging Program, GM is kicking off the program with the first such stations in Michigan and Wisconsin. Nearly 1,000 dealers, working with local authorities on location selection and permitting, have enrolled in the program so far.

“Nearly 90% of the U.S. population lives within 10 miles of a GM dealership. Our dealers are deeply involved and trusted in their communities and are well positioned to determine locations that expand access to EV charging, including at small businesses, entertainment venues, schools and other popular destinations,” says Hoss Hassani, vice president of GM EV Ecosystem.

The chargers will be branded with GM’s Ultium brand, as well as show branding from charger supplier FLO  and the sponsoring dealer.

GM’s announcement comes at a time when the transition from the internal-combustion engine to battery-electric-vehicles is dominating the industry, sales of BEVs are climbing and the government and industry are targeting having half of all-new car sales BEVs by 2030.

The program is building on GM's strategy to create a coast-to-coast, border-to-border network of EVgo 350-kWh DC fast chargers at more than 500 fueling stations and truck stops. Also, GM is close to launching at-home versions of its Ultium brand chargers.

A nettlesome issue for automakers is the state of the charging infrastructure today, which is a patchwork of new chargers, Tesla-only chargers, chargers that are networked and monitored for operability and maintenance and un-networked chargers that have been in service for a decade but are not well maintained. Journalists and BEV advocates have been writing for the past few years about the sorry state of public chargers.

That reality, says GM, is why it has chosen not only to invest in charging infrastructure, but also selected FLO, which has a record of 98% uptime for its chargers, as its partner. FLO has 24-hour monitoring of its chargers and a quick-response system to repair problems.

“We are proud to support this extraordinary effort to grow access to public EV charging in thousands of local communities across North America,” says Louis Tremblay, FLO president and CEO. “Together, FLO, GM and GM dealerships will bring reliable charging to drivers from curbside to countryside.”

Level 2 chargers recharge a BEV in 6-12 hours, with a connection that is about 7.5 kWh. FLO’s Level 2 chargers work at 19.1 kWh. Not all BEVs can recharge at that rate, but FLO’s chargers do cut down the recharge time for those that can. FLO manufactures chargers in Auburn Hills, MI.

Tremblay notes that one of the leading causes of chargers to be in disrepair is vandalism, along with connectors becoming loose, vehicle incompatibility, software problems and lack of over-the-air networked support. FLO has a network of electricians in every state where it operates and promises repair to a charger within 48 hours of a problem being reported or detected.

Wheelers Chevrolet GMC, the first GM dealer to sign up for the program, recently installed its first charging stations at several locations in Marshfield, WI, including two parks, a library and a sports complex. Young Chevrolet Cadillac was next to install its first charging stations at Memorial Healthcare Wellness Center in Owosso, MI. Dealers in Delaware, Georgia, Illinois, Indiana, Kansas, Ohio and Washington state are expected to install their first chargers in coming weeks and months.

"We're excited to be the first dealership in the nation to have these chargers," says Mary Jo Wheeler-Schueller, owner of Wheelers Chevrolet GMC. “This will help put Marshfield on the map in terms of EV leadership.”

Enthusiasm for BEVs among dealers, though, is not universal. Dealers are watching start-up BEV companies such as Tesla and Lucid bypass the traditional dealer franchise system. They also see their business model under pressure as BEVs need less service and maintenance, traditionally a big portion of profits. Finally, the politics of electric-vehicle subsidies have been hot issues for dealers. U.S. Rep. Mike Kelly (R-PA), for example, is a car dealer and introduced a bill a decade ago to repeal federal EV subsidies and has been a vocal opponent of BEV sales targets and government support.

GM has cut the price of the Chevy Bolt BEV. It is rolling out a Chevy Equinox BEV with 300 miles (483 km) of range for around $30,000 in fall 2023, as well as a Silverado pickup BEV and a GMC Sierra BEV, on top of the Hummer BEV it introduced last year. Cadillac’s battery-electric Lyriq CUV has sold out for the 2023 model year; and the GM division has stated it will have an all-BEV showroom by 2030 – indicating even the hulking and popular Escalade SUV will be battery-powered by then.

With the federal government and most automakers spending tens of billions on new products and charging infrastructure, the question is not if the whole industry is going electric, it’s how fast it is going to achieve 90%-100% of new-vehicle sales per year.