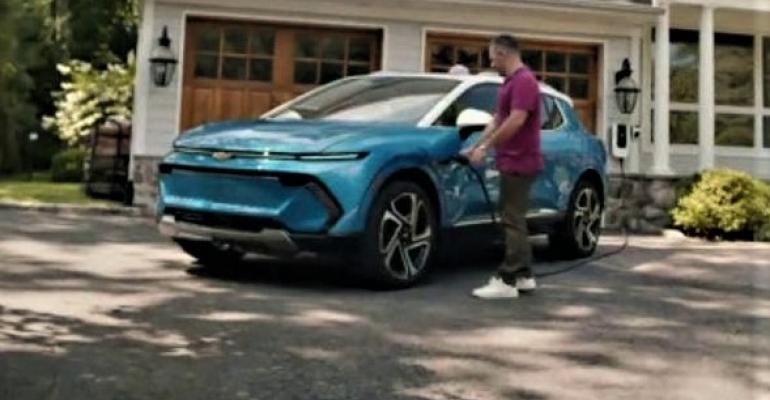 While Chevrolet has the most-seen single spot, Subaru gets the most overall impressions split between two spots on this week’s list, according to iSpot.tv.

Chevrolet’s “EVs for Everyone” was the No. 1 auto ad for both TV ad impressions and estimated national TV ad spend, per data from iSpot.tv. A song by Fleetwood Mac gives the spot a lighthearted, upbeat feel, which viewers appreciated: 21% of iSpot’s Ace Metrix survey respondents cited the music as the single best thing.

Subaru scores the most total impressions for a brand on the ranking given its two spots, which have distinctly different tones.

Its second-place ad “Underdogs” spotlights the brand’s “National Make a Dog’s Day” initiative. Animal-centric programming played a part in delivering viewers: The Incredible Dr. Pol was the No. 3 show for impressions, and networks including Animal Planet and National Geographic Wild had top airings counts.

The No. 4 ad, “Well Adventured,” has a more epic feel, featuring an outdoorsman exploring nature with his Subaru. Notably, this was the only spot in the week’s ranking not to air during an NFL game. And not only is it the ad with the highest Ace Metrix Persuasion score (6.2% above industry norms), but also the highest Brand Match rating: 85%, referring to the percentage of surveyed viewers who remembered it was a Kia ad after watching it.

Despite having the fewest total airings in the ranking, Kia takes third place for total impressions with “A New Elevation.” Although NFL games generated the most impressions for the spot, Kia focused the most spend on reality show Bachelor in Paradise.

Jeep rounds out the ranking with “Discover Sound That Can Truly Move You,” with impression counts nearly tied between NFL and college football.

Chevrolet: EVs for Everyone

Jeep: Discover Sound That Can Truly Move You