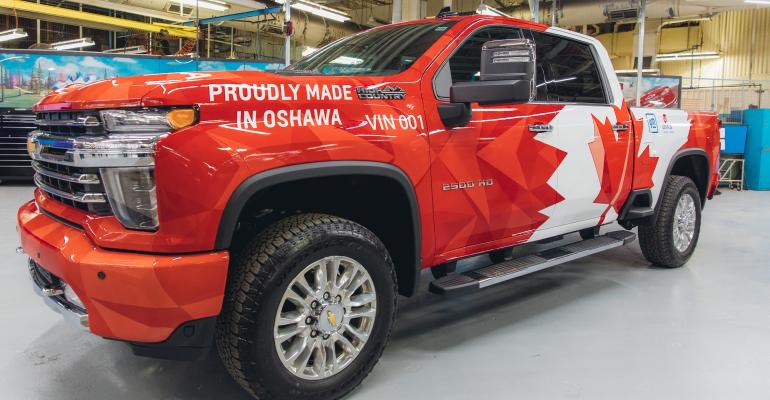 Given the profitability of Detroit’s three automakers, Unifor is eyeing economic improvements for its 23,000 auto-sector members in new contracts with General Motors, Ford and Stellantis, says Lana Payne, the new president of Canada’s largest private-sector union.

Unifor, the union representing Canadian auto workers, knows electrification is a challenge for the automotive industry, and it will listen to corporate demands as it negotiates new labor contracts with General Motors, Ford and Stellantis this year.

But given the profitability of Detroit’s three automakers, it also expects to see economic improvements for its 23,000 auto-sector members in the new contracts, says Lana Payne, Unifor’s new president and the first woman to lead Canada’s largest private-sector union.

Electrification means the auto industry is facing a once-in-a-century transition and ensuring Canadian workers have a place in the changing industry is critical, Payne says during a virtual appearance at the Federal Reserve Bank of Chicago’s 29th annual Automotive Insights Symposium in Detroit.

“We look at this shift toward zero-emission vehicles as part of an inevitable evolution,” she says. “We see the opportunities this shift presents to secure new work in plants. New tools and skills in the hands of workers. New openings for regional economic development and innovation.”

At the same time, Unifor must protect and increase wages, including improving the automatic cost-of-living adjustments and other benefits that are part of the existing contracts,  says Payne (pictured, below left), a former journalist who became a labor activist and was elected Unifor president in August. 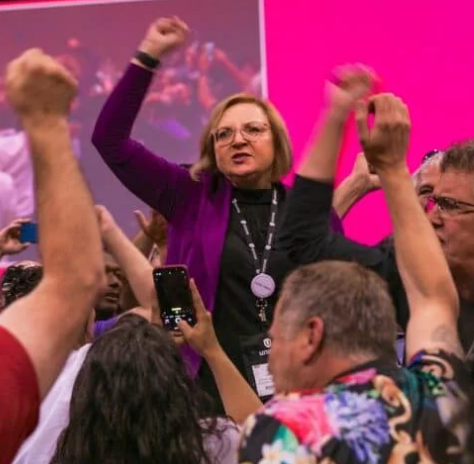 “We know the stakes are high. The job implications of building vehicles with fewer moving parts is not lost on us,” she says. “Our own internal analysis shows nearly one-third of our membership in the independent parts supply sector are vulnerable in this shift to EVs. That’s thousands of workers building parts that are simply non-transferrable to electric vehicles. What happens to those good union jobs? What happens to those critical skills? This is a real challenge.”

In 2020, Unifor successfully negotiated for new products and investment at the GM plant in Oshawa, ON, which many thought would be closed permanently, Payne says, as well as the Stellantis plant in Windsor, ON, and the Ford plant in Oakville, ON. In 2021, it negotiated with GM to build a new battery-electric delivery van at the CAMI plant in Ingersoll, ON.

Unifor helped secure billions of dollars in new EV-related investment, breathing new life into the Canadian auto industry at a time when many analysts thought it might waste away.

“According to our friends at the Center for Automotive Research, all of that represents about 15% of total EV investment across the continent – a shade above our share of the North American sales market,” Payne says. “This is important, since EV investments have significantly outpaced investments in gas-powered vehicles for the past three years, with no signs of slowing.”

Unifor, which already has members employed across Canada in the mining industry, is keeping an eye on the extraction and processing of minerals required for EVs. Unifor expects its membership in this sector to grow alongside EV production.

Unifor also is monitoring the non-union plants operated by Honda and Toyota in Ontario. “We consider organizing a long game,” says Payne, noting Unifor has supporters in both the Honda and Toyota plants.

There will be more discussion about jobs, job quality and the EV transition over the coming months, says Payne: “Bargaining has a tendency to put these critical worker issues in the public spotlight.”

However, because of what Payne describes as “philosophical” differences, the Unifor contracts do not include profit-sharing or lump-sum payments, which have been a feature of UAW contracts for years. At the same time, the UAW bargains for health care and does not have cost-of-living protection in its contracts, she adds.