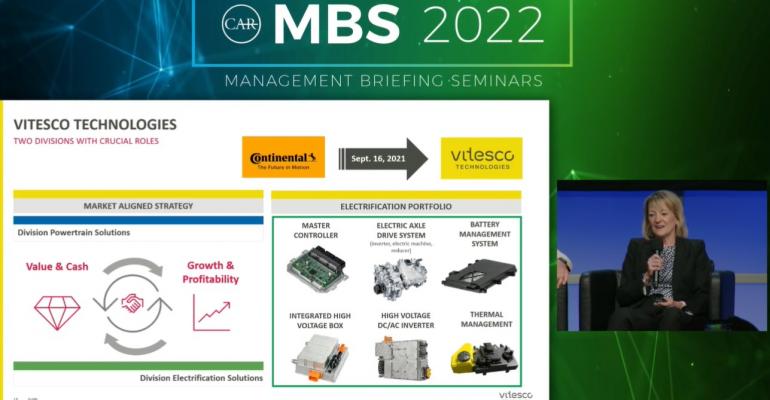 Whether to design and build in-house or rely on suppliers depends very much on each OEM’s market position. Volkswagen and Faraday Future highlight the two sides to the debate.

That’s the conclusion of a 2022 CAR MBS panel on the battery-electric-vehicle-driven evolving supply chain and who – Tier 1s or OEMs – will make what in the future.

Whether to manufacture key components in-house or outsource them to suppliers is an age-old question automakers have struggled with and waffled over through the decades. And that’s no different today in the transition to BEVs, notes Sandy Stojkovski, CEO of Vitesco North America, a manufacturer of intelligent and electrified drive systems that was spun off from Tier 1 giant Continental a year ago.

“I think we’ve seen this movie before,” she says of the auto industry’s in-house/outsourcing pendulum that often can swing one way or the other and back again.

She notes that when it comes to BEVs and some of the key components Vitesco makes, it appears automakers want more control over motor production but are less territorial about inverters. But even that can vary, as the panel discussion reveals.

Deciding whether to design and manufacture in-house rather than outsource often comes down to several factors.

Keeping a component close to the vest potentially can provide an OEM a competitive advantage in terms of technology, help it meet its commitments to labor unions, advance its understanding of how an emerging technology works and ensure a steady supply of product.

But outsourcing can allow an automaker to shop the market for the best technology and price and mitigate its investment risks.

Adding all that up often leads automakers to widely different solutions.

Take the case of Volkswagen, one of the biggest and oldest automakers on the planet – and newcomer Faraday Future.

BEVs are built differently from internal-combustion-engine vehicles, which typically have a network of more than a hundred electronic control units, he says. With BEV platforms being created by scratch, automakers can streamline that architecture with fewer, high-powered zonal computer controls that allow for over-the-air updating and constant upgrades to new features and capability.

With BEVs, “we have the opportunity to unify the electronic architecture. That drives what we build in-house and what we outsource,” Fischer says.

Batteries are also at the top of VW’s list of components to control. “Battery guys are not doing (the work) pro-bono; they want to make money,” he says, adding that’s why VW has ventures to manufacture its own. “It’s the most expensive part, so every dollar we can squeeze out can lower the price (of BEVs) and maximize profitability.”

And importantly, VW wants its vehicles all built in its own factories.

Faraday Future, a startup with neither the volume, size, nor industrial complexity of VW, has gone in a different direction.

“We do a lot of our engineering and design in-house, but we do contract manufacturing strategically where (we have intellectual property),” says Bob Kruse, vice president-product execution.”

For instance, it designed and builds its own motors and inverters, but it sends the inverters to China where they are integrated into propulsion systems and shipped back to Faraday Future’s California assembly plant.

In terms of the car’s electronic architecture, the automaker uses the open-sourced Android Operating System and adds layers of its own software on top. Faraday Future will outsource its battery, as well, though it won’t say where for now.

“We’re leveraging what’s out there,” Kruse says of high-voltage lithium-ion batteries. “Given our volume, there’s plenty out there.”

And while Faraday Future is building its first model – the FF91 luxury sedan – at its own assembly plant, it will outsource the next-in-line FF81 Tesla Model X competitor to a contract manufacturer in Korea.

Navigating all this is tricky for a supplier, which has to find ways to support its OEM customers in whichever way they choose.

Flexibility is a must, Stojkovski says. She points to a recent deal between Vitesco and Renault that will see the two partners develop an electronic powertrain that combines the DC:DC converter, inverter and onboard charger into a single box, but that Renault ultimately will produce in its own facilities.

“It’s a win-win,” she says. “We support them as they scale up their (manufacturing) ability and they give us contracts that support our portfolio. That’s one example of being agnostic to customer sourcing strategies.”