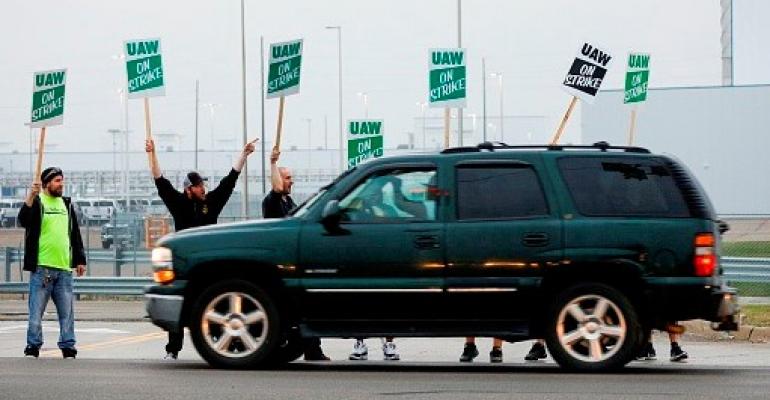 Getty Images
GM loses market share during strikes and never gets it back.
Industry News

There’s got to be a better way to get workers a raise without torching the countryside.

The recent strike at General Motors shows traditional labor practices must change. Not only did the strike cause considerable financial damage at GM, it drove another wedge between the company and its workers. And worst of all, it hurt a lot of innocent bystanders.

Thanks to the UAW, the hourly workforce at GM earns the highest compensation in the U.S. auto industry. But you would never know that by listening to union leaders. They attack GM as a vile and heartless corporation that deliberately tries to oppress honest working men and women.

Of course, they kind of have to say that. Union officials are elected, not appointed, and they are just as political as any Republican or Democrat. No UAW official ever got elected by saying, “You know what? Management is right. We’ve got to make sure our labor costs are competitive.”

It’s the opposite. Union leaders get elected by attacking management’s greed and arrogance.

This creates a poisonous relationship between the company and its workforce.  Many GM hourly workers don’t identify as GM employees. They identify as UAW members. And they see the union as the source of their jobs, not the company. It’s an unhealthy dynamic that puts GM at a disadvantage to non-union automakers in the U.S. like Honda and Toyota, where workers take pride in the company they work for and the products they make.

Attacking the company in the media also drives away customers. Who wants to buy a shiny new car from a company that’s accused of underpaying its workers and treating them unfairly?

Data from the Center for Automotive Research (CAR) in Ann Arbor, MI, show that GM loses market share during strikes and never gets it back. GM lost two percentage points during the 1998 strike, which in today’s market would represent a loss of 340,000 sales. Because GM reports sales on a quarterly basis we’ll only find out at the end of December if it lost market share from this strike.

UAW members say one of their greatest concerns is job security. But causing a company to lose market share is a sure-fire path to more plant closings and layoffs.

Even so, unions are incredibly important for boosting wages and benefits for working-class people. GM’s UAW-represented workers earn considerably more than their non-union counterparts, about $26,000 more per worker, per year, in total compensation. Without a union they never would have achieved that.

Strikes are a powerful weapon for unions. They usually are the only way they can get management to accede to their demands. If not for the power of collective bargaining and the threat of a strike, management would largely ignore union demands. If you took away that threat, management would pay its workers peanuts. Just ask the Mexican line workers who are paid $1.50 an hour to make $50,000 BMWs.

But strikes don’t just hurt the people walking the picket lines or the company they’re striking against. They hurt suppliers, car dealers and the communities located near the plants.

The Anderson Economic Group estimates that 75,000 workers at supplier companies were temporarily laid off because of the GM strike. Unlike UAW picketers, those supplier workers won’t get any strike pay or an $11,000 contract signing bonus. No, most of them lost close to a month’s worth of wages, which must be financially devastating for them.

GM’s suppliers also lost a lot of money. So now they’re cutting budgets and delaying capital investments to make up for the lost revenue, which is a further drag on the economy.

According to CAR, the communities and states where GM’s plants are located collectively lost a couple of hundred million dollars in payroll and tax revenue. Some economists warn that if the strike were prolonged it could knock the state of Michigan – home to GM and the UAW – into a recession. That prompted the governor of Michigan, Gretchen Whitmer, to call GM CEO Mary Barra and UAW leaders and urge them to settle as fast as possible.

So, while the UAW managed to get a nice raise for its members, the strike left a path of destruction in its wake. That’s not fair to the innocent bystanders who will never regain what they lost.

I’m not sure how this will ever be resolved. I understand the need for collective bargaining and the threat of a strike. But there’s got to be a better way to get workers a raise without torching the countryside.