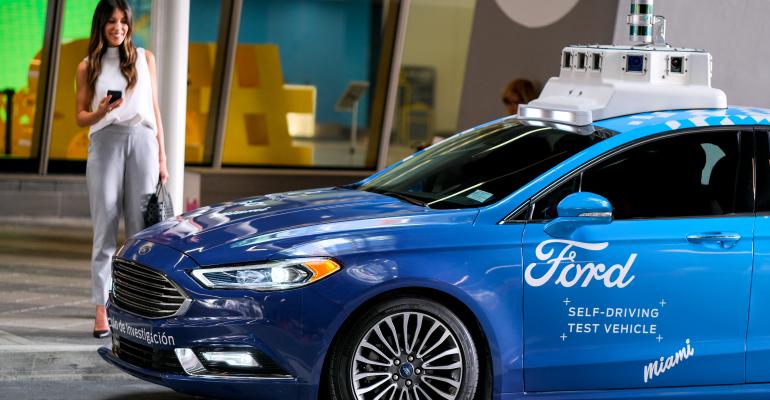 Ford says its self-driving vehicle service platform will be a far-reaching ecosystem that will appeal to a variety of companies.
Industry News

Detroit Has A Rendezvous With Destiny

The car-sharing business is growing far faster than the car-selling business. In about a decade we’ll know if the traditional automakers rose to the challenge or failed. So roll up your sleeves, Detroit.

Will Detroit make the transition from being an industrial powerhouse that manufactures cars and trucks to becoming a customer-oriented leader that provides mobility services? It might. But history suggests it will be an extraordinary struggle. The emergence of mobility services means traditional automakers face an existential threat. And they know it.

When Detroit faced crises in the past it knew what to do. In wartime it developed a laser-like focus on mass producing military materiel. During the Great Depression, the Great Recession and other economic downturns, it slashed costs by closing plants and laying off workers. When hit by foreign competition it re-learned how to boost quality and improve its products.

But now it faces a crisis that has nothing to do with cutting costs or building better cars and trucks. The new world of mobility is all about retailing immediate transportation to millions of people everyday day, and monetizing the data generated by those services and customers. Others, like car rental companies, ride-hailing companies and even airlines, are far more adept and experienced at doing this.

History suggests automakers will not make the transition to a new type of business model. Companies rarely make a successful transition when new technology removes their competitive advantage and opens the door to new players.

In the late 1970s there was a lot of talk in business schools about the demise of railroad companies in the U.S. What the railroads failed to recognize, so the case studies went, was they were in the transportation business, not the railroad business. Had they recognized they were in the transportation business, so the thinking went, they would have adapted to the automobile and remained as dominant as they ever were.

It was an interesting premise. But the railroads never would have made such a transition. Their expertise was in knowing how to run railroads, not in how to manufacture and market automobiles. They didn’t have the skills or insights on how to run a car company. They were very good railroad men, period.

The same goes for current automakers. They’re really good at making cars and trucks. Why should they think they’re better at running what is essentially a taxi service than the companies that already do so?

Traditional automakers are in danger of merely becoming suppliers of vehicles to giant mobility companies which will then dictate the specifications and demand the cost targets that the OEMs must meet. Since these vehicles will be shared by millions of consumers and even double as delivery vehicles, mobility companies will not need as many vehicles as we use today. For an industry based on high-volume manufacturing, this is an existential threat.

Of course, just because it will be difficult doesn’t mean Detroit is out of the running. It brings formidable capabilities to the race for mobility. But will those capabilities stay in Detroit or migrate to other high-tech hubs around the world?

The city is going through an amazing renaissance and the metropolitan region is home to the world’s greatest aggregation of automotive research and development centers. But challenges abound. The primary and secondary school systems are not competitive. There is a serious shortage of technical and vocational skills. And while there’s been a recent flowering of entrepreneurial activity, it pales in comparison to other technology centers.

Once upon a time Detroit was the Silicon Valley of its day. Entrepreneurs like Henry Ford, William Durant and the Dodge Brothers were the ones who were creating mobility start-ups. Detroit had the technical capability, the venture capital money and the attitude that anything was possible.

It could all happen again. But it’s going to take a clearly communicated vision from an enlightened leadership, along with eager buy-in from the public. It also must happen quickly because the mobility revolution already has begun. The car-sharing business is growing far faster than the car-selling business. In about a decade we’ll know if the traditional automakers rose to the challenge or failed. So roll up your sleeves, Detroit, you have a rendezvous with destiny.