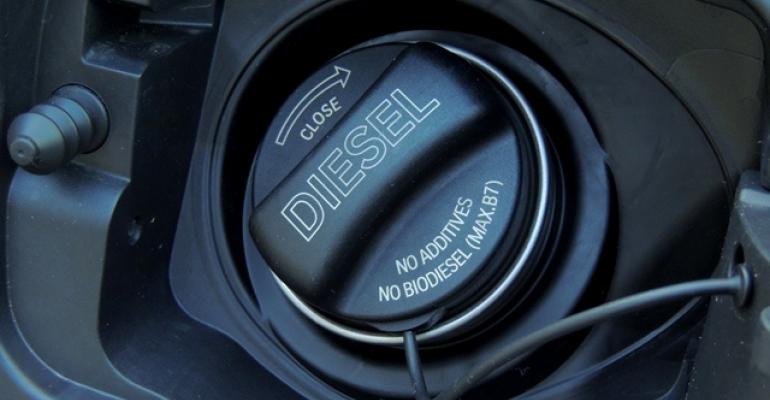 &ldquo;I personally think there will be effects, that people and politicians don&rsquo;t trust diesels, and this is the effect the whole industry has from this affair,&rdquo; BMW&rsquo;s Wolfgang St&uuml;tz tells WardsAuto.

DETROIT – If consumers are angry with Volkswagen for admitting it installed defeat devices on diesel engines to sidestep mandatory equipment to ensure cleaner emissions, BMW has yet to see impact on its own diesel sales.

The Bavarian automaker sells multiple vehicles in the U.S. with 2.0L 4-cyl. and 3.0L 6-cyl. diesel engines, and executives say the take-rate for diesels has remained about the same since the news broke in Wolfsburg in September. Smaller diesel engines also are offered on BMWs available in Europe.

“I personally think there will be effects, that people and politicians don’t trust diesels, and this is the effect the whole industry has from this affair,” Stütz tells WardsAuto during the North American International Auto Show here.

“The future legislation is also affected because the legislators will tighten the (emission regulation) limits and the boundary conditions,” he says. “This is what we see today.”

Whether the underhanded acts of some brazen engineers at VW ultimately will doom the market for diesel engines is difficult to predict, Stütz says. “Maybe there will be an effect upcoming.”

When the industry learned of VW’s shenanigans, automakers with diesel engines, such as BMW, ordered internal inquiries to determine if their companies were susceptible to such deception.

“We were always clean. We are clean,” Stütz says. “We do not manipulate emissions systems, and we had also in the past a process inside the company to make sure there are no defeat devices on board.”

In the case of BMW, the process was refined to make it more stringent in light of the VW debacle, but still it revealed no issues or concerns, he says.

This week, Renault says it plans a software upgrade to reduce oxides of nitrogen emissions from its diesel engines after European environmental groups criticized the automaker’s real-world diesel emissions for being too high.

Beyond the VW saga, Stütz says the price of gasoline and diesel fuel remains a crucial factor in the future popularity of diesel engines.

“When both prices rise, then from a certain level the customer may become interested in diesel engines again in the U.S.,” he says. “But at the moment, this is not the case.”

Nationwide, the current price for a gallon of regular unleaded gasoline is $1.87, compared with $2.13 for diesel and $2.39 for a gallon of premium unleaded, according to AAA.

Although BMW offers diesels in luxury sedans, its most popular diesel vehicle is the X5 CUV. As many as 30% of X5 customers have opted for the 3.0L diesel inline-6 in the recent past, although the take-rate has dipped slightly.

BMW's 4-cyl. diesels are popular in both the 328d xDrive Sports Wagon and the X3 xDrive28d utility vehicle.