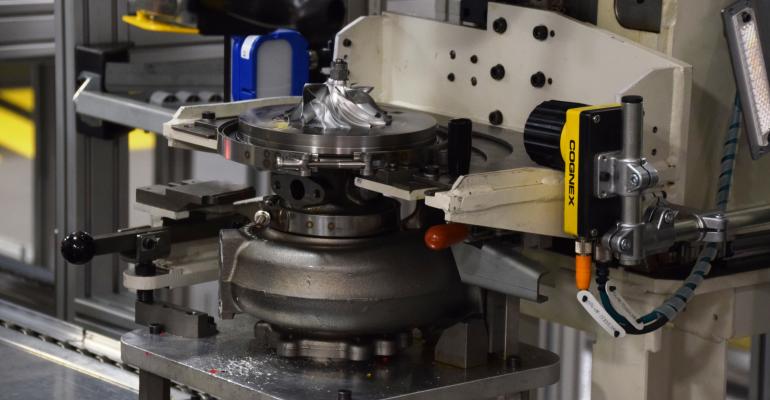 Turbo Engine Use at Record High

The use of turbocharged engines in light vehicles built for the U.S. market hit a record high at the midpoint of the &rsquo;17 model run, despite a decline in turbodiesels.

The use of turbocharged engines in U.S.-market light vehicles continued on an upward path in the ’17 model year, an exclusive WardsAuto survey shows.

It marked the sixth annual increase in turbo use, beginning with 10.7% in ’11. Prior to that, turbo installations hovered between 4.5% and 6.6% annually.

Significantly, it has been the move to small gasoline engines with fewer cylinders that has fueled the turbo gain in recent years, even as turbodiesels suffered from negative publicity and much consumer skepticism outside the light-truck market.

For example, turbodiesels held a 4.2% share in model year ’06, 91% of them in light trucks, with only 1.6% of LVs equipped with the forced-induction gasoline engines.

In contrast, turbodiesels were installed in just 2.7% of the LVs built in the first half of the ’17 model run, while turbocharged gasoline engines powered a record 24.9% of output.

The diesel share would have fallen even further in ’17 had it not been for the re-introduction of a diesel in the Chevy Cruze. That helped offset the absence of Volkswagen’s once-popular, but now discontinued, diesel cars and the lack of diesels in some fullsize pickups as a result of EPA certification bottlenecks.

Not included in the turbocharger count is a new breed of powerplant that combines the low-speed power boost of a supercharger with the higher-speed push of the exhaust-driven turbo.

Introduced to the market in ’15, when they accounted for less than 0.1% of output, the super/turbo engines achieved a 0.2% share in ’16, but trailed off in ’17, at least in the first half of the year, to 0.1%, the decline stemming largely from the temporary absence of some models.

Supercharged engines have remained low-volume over the last 11 years with annual rates of 0.1% to 0.5%.

Gasoline direct-injection engines were installed in 50.5% of all ’17-model LVs, up from the prior peak of 47.1% in the entire ’16 run. This technology, too, has made consistent gains since WardsAuto began tracking it at 3.7% in model year ’08.

First seen in ’06 when it bowed on Lexus luxury cars, combined direct and sequential injection was installed on a benchmark 3.5% of ’17 models. The gain is credited in large part to the introduction of a new version of Ford’s EcoBoost 3.5L V-6.