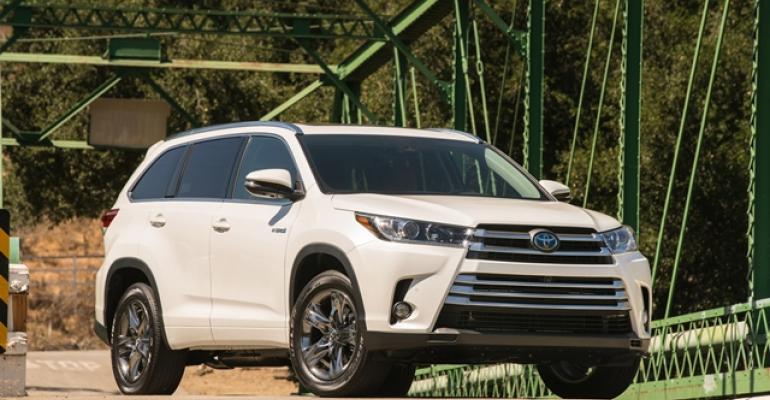 The automaker hopes to duplicate the market success of its RAV4 strategy with new packaging and pricing for the Highlander Hybrid.

Toyota passes a milestone on hybrid-vehicle sales, saying it has moved more than 10 million of its gasoline-electric models – including plug-ins – worldwide since its iconic and market-leading Prius hit showrooms in 1997.

The global tally includes 3 million deliveries in North America, where Toyota-brand officials are cutting prices in an effort to sell more of the alternatively powered vehicles, even as demand for the core Prius model is declining.

Last year, U.S. sales of the Prius and Prius C combined, including plug-ins, plunged 26.1% to 136,629, from 184,794 in 2015, a drop Toyota North America officials pin on cheap gasoline and the general market shift away from sedans and toward CUVs.

Overall, hybrid sales were down 1.8% industrywide last year in a record light-vehicle market that gained 0.4%.

Lentz points to the success of the RAV4 Hybrid CUV in 2016. Toyota cut the premium for the gasoline-electric powertrain on the ʼ16 model, introducing two lower trim lines for the hybrid models to improve affordability. The market responded, with 45,097 delivered, according to WardsAuto data.

“That 300% jump in (industry hybrid truck sales) was almost all RAV4,” Lentz says, pointing out hybrids accounted for about 13% of total RAV4 sales in the U.S. “(And that’s) in a volume player. Pretty strong.”

Toyota says that demand even took it by surprise and left dealers short of supply through most of the year.

Because of that success, Toyota is looking to duplicate the performance with its updated ’17-model Highlander Hybrid CUV. As with the RAV4, it effectively has cut the option price for the gasoline-electric powertrain through two new lower-level trim lines, the $36,270 LE and $41,330 XLE.

“So where that’s always been a modest volume for us, we’re trying to…add a little more appeal to the hybrid,” says Bill Fay, group vice president and Toyota Div. general manager. Demand for the Highlander Hybrid might not “go up as dramatically as the first year for RAV4, but (we expect) to have some improvement this year just by packaging.”

Toyota says the price-cutting strategy is necessary in the hybrid sector, because it is getting difficult for consumers to see the value in the fuel-sipping technology.

“I think what drives that is the low price of fuel,” Lentz says. “When gas was $4, the market would accept a certain premium for hybrids. Today at $2.50 (per gallon), it’s a much smaller premium that’s acceptable.”

Carter sums up Toyota’s new strategy this way: “The hybrid to this point was always premium grade. We’re bringing that down.”

Company officials say they haven’t seen evidence in early consumer data showing the severe slump in Prius demand is related in any way to the restyling the sedan underwent for the ’16 model year.

“The current generation is more polarizing, so you’ll be quicker to say either ‛I like it’ or ‛I don’t,’” Fay says. “The last generation was a little more midstream. But I don’t think that’s the primary driver of some of the outflow of Prius to RAV4 hybrid and other areas. It’s just the dynamics of fuel prices and the overall shift from cars to light trucks.”

The automaker’s run past the 10 million mark globally occurred at the end of January and was achieved just nine months after it broke through the 9 million barrier last April.

“When we launched Prius, no one even knew what a hybrid was,” Takeshi Uchiyamada, co-chairman of the Toyota board and considered the father of the Prius, says in a statement. “But thanks to early adopters, hybrids have ridden a wave of success into the mainstream.”