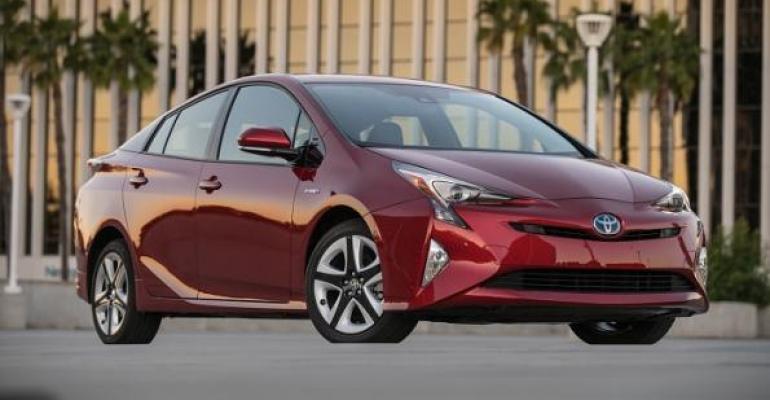 Pricing for all grades of Hyundai&rsquo;s new hybrid car undercut similar grades of the Prius, which has seen sales slump this year as Americans flock to light trucks.

AUSTIN, TX – Toyota is not slashing pricing just yet on the Prius hybrid in the wake of Hyundai undercutting the car with its new Ioniq hybrid.

The Ioniq also undercuts mid and upper grades of the Prius, with the Ioniq’s SEL and Limited models priced at $23,950 and $27,500 and Toyota’s Prius Two Eco, Prius Three, Prius Three Touring and Prius Four and Four Touring models ranging from $25,165 to $30,015.

“They’ve still got to get launched and get some awareness and get that product on the map, so (we are) not too worried about (their pricing advantage) short-term, but it’s something we always have to keep an eye on as we get a little further along in the year,” Bill Fay, group vice president-Toyota Div., tells WardsAuto here during a Toyota C-HR media preview.

Besides Hyundai needing to establish a reputation in the alternative-powertrain group, another reason Toyota may be taking the price difference in stride are the deals available for the Prius.

According to buyatoyota.com, the official website of U.S. Toyota dealers, those living in Michigan, Ohio, Kentucky and Tennessee can get $1,500 cash back or 0.9% APR for 60 months on a ’17 Prius liftback.

Those wishing to buy a ’16 model – of which there are fewer than 1,000 in stock, Fay estimates – can enjoy bigger discounts.

Early last week, buyatoyota.com was advertising 0% APR for 72 months on a ’16 liftback.

Prius sales have been declining for more than a year, as low gas prices have prodded American vehicle buyers away from cars and toward CUVs and other light trucks at record rates.

“The Prius is caught up a little bit in the whole car-light-truck movement in the overall market,” Fay says. But he points to the popularity of Toyota’s RAV4 Hybrid as proof Americans do want better fuel economy, just with more versatility than a car provides.

“The timing of RAV hybrid has allowed us to capture some of that outflow that might want the benefits of a hybrid, but (also) want the utility and the ride of (a CUV),” he says.

When asked if Toyota would consider a CUV body style of the Prius, Fay says the automaker is more focused on boosting hybrid offerings of existing CUVs and light trucks.

“I think we’re looking more at, ‘Where else should we have hybrids?’ I don’t know if that’s a Prius crossover or doing a little bit more within (the) RAV (lineup).”

Fay also notes Toyota has repositioned its hybrid variant of the Highlander large CUV to bring down the price premium the fuel sippers usually carry.

“So I think we’ll do more of that, maybe not necessarily make a Prius crossover, but maybe continue to look at where hybrid will enhance and support the move to light truck.”

For now, Toyota is happy with the sales pace this year of the new Prius Prime plug-in hybrid. Toyota sold 2,728 in January and February, and Fay says California dealers are asking for more units.

However, he says the automaker is “optimistic the consumer will find their way back” to non-PHEV hybrids such as the Prius liftback.