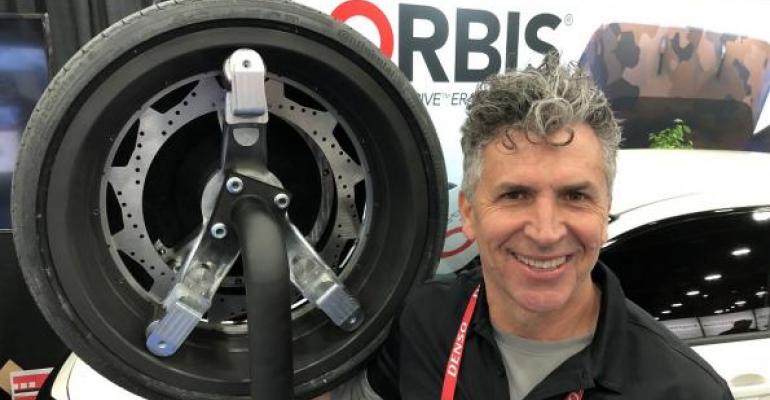 Orbis Driven&rsquo;s unique approach to using an electric motor to drive a ring gear draws inspiration from as far back as the 1898 Lohner-Porsche EV.

The company’s brochure explains “the technology divides a wheel or cog into two essential parts, a stationary hub and a rim or ‘ring.’ The ring rotates about the stationary hub, driven by a lightweight, high-speed motor.”

Hays says the ring drive is more efficient while reducing vehicle weight as much as 40% and driveline complexity by 75% compared to powertrains in which the electric motors (in-hub or in the driveline) power an axle.

“What you really want is a lightweight motor to drive the ring rather than the conventional motor driving the axle center,” he says.

Unlike the lightest of traditional hub motors that add 68 lbs. (31 kg) of unsprung mass to a wheel, the ring drive weighs just 35 lbs. (16 kg) per wheel in an automotive application, close to the maximum weight automakers are seeking at each corner, Hays says.

The system could knock hundreds of pounds off a traditional internal-combustion-powered vehicle by eliminating the need for a transmission, driveshaft, differential and axles.

Hays’ automotive motor produces 70 hp, or 280 hp if all four wheels are equipped with the drive motors. A Honda Civic Type R prototype on display here at the SAE World Congress Experience features two ring drives on the rear wheels producing 140 hp while the front axle is still powered by the production car’s 306-hp turbocharged 4-cyl.

Braking also is enhanced because installing the ring drive moves the brake system’s disc and caliper to the outside of the wheel where it operates 20% cooler, Hays says.

The biggest roadblock to electric-vehicle proliferation is battery cost, now estimated at about $140 per kWh. One approach to reducing battery cost is to scale up battery manufacturing to achieve the stated industry goal of $100 per kWh, Hays says.

But cutting the electrical demand for the motors produces the same result, either by permitting use of smaller batteries or giving an EV longer range.

Hays says the technology also has military and robotic applications, whether in remaking the Humvee or adding a highly capable skateboard-like all-terrain vehicle with ring drive wheels.

So far, the company has no contracts with the U.S. Army or automakers, but Hays says the technology is ready to move from prototype to production, with Orbis providing the ring drives.

“We don’t want to build a separate car company like Tesla,” Hays says.