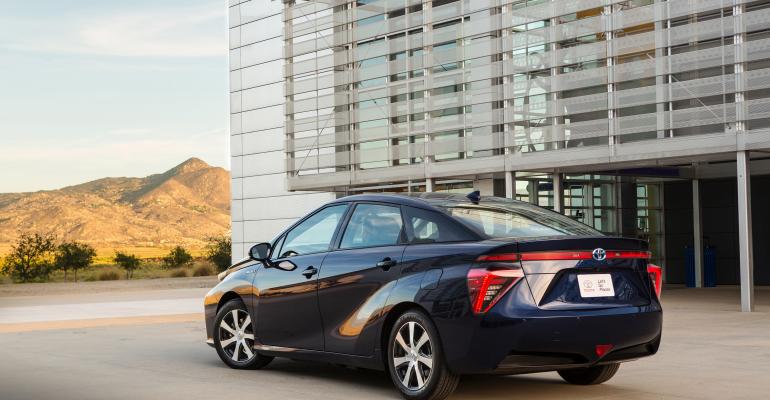 Although their product portfolios do not include mobile-phone, computing and general power-grid applications, the battery manufacturers are giants in the auto industry thanks to their connections to Toyota and Nissan.

Not among the industry leaders in that their product portfolio does not include mobile-phone, computing and general power-grid applications, they nonetheless are giants in the auto industry thanks to their connections to Toyota and Nissan, Japan’s two biggest automakers.

Toyota and Nissan are the world’s leading producers of gasoline-electric hybrid cars and all-electric vehicles, respectively.

Both suppliers, careful not to tread too closely to their main customers’ operations, nevertheless disclose details of their internal business plans.

With Toyota’s launch of the new Prius in December, Primearth (formerly Panasonic EV) took a big second step in its long-awaited shift away from nickel-metal-hydride to lithium-ion hybrid batteries.

According to the automaker, an estimated half of Toyota’s battery packs will be Li-ion. Estimating from the previous 5-year Prius sales total, 135,000 units would incorporate lithium batteries – that is, half of a yearly average of 269,220.

Primearth’s initial foray into lithium was with the first 600 Prius Plug-In Hybrids test-marketed before the model’s mass-market launch in December 2011, at which time Toyota switched to Panasonic as a supplier.

Primearth produced the cells, which Toyota assembled at its Honsha plant in Toyota City and continues to do so.

In January 2011, Primearth renovated its main Ohmori plant in Shizuoka prefecture to mass-produce lithium cells for the 7-seater version of the Prius wagon, which is sold as the Prius α in Japan and Asia and Prius+ in Europe.

Toyota chose to use lithium solely to create space for a third row of seats.

Neither Toyota nor Primearth discloses the split between 5- and 7-seater models.

Since supplying the first Prius in 1997, Primearth has manufactured batteries for more than 9 million hybrid vehicles of which more than 95% are NiMH.

The supplier has the capacity to produce lithium cells for 200,000 battery packs at its Ohmori plant, representing 40% of plant capacity.

Last May, Primearth expanded NiMH-battery capacity at its Taiwa plant near Sendai, boosting capacity an estimated two-thirds to 500,000 units. The facility supplies batteries for the Aqua and Prius c hybrids produced at Toyota’s Kanegasaki plant in Iwate prefecture.

Total hybrid battery capacity, both NiMH and lithium, is 1.3 million units. That figure will grow with this year’s opening of a joint venture plant in Changshu, China.

Hirokazu Kawaii, a manager in Primearth’s planning group, indicates the next step in expanding Li-ion battery production probably will occur when the supplier renovates its Sakaijuku plant. He gives no time frame, however.

In addition to all 32 Toyota hybrids including Lexus models, and excluding the Prius plug-in hybrid, Primearth supplies NiMH batteries to Mazda for the Axela Hybrid, truck maker Hino for the Dutro Hybrid and Allison Transmission for unspecified Allison hybrid systems.

Not employing a Primearth NiMH battery is Fuji Heavy Industries, maker of Subaru cars and 16.5% owned by Toyota, which opted for Panasonic (the former Sanyo Electric division) when developing its XV Crosstrek Hybrid.

Primearth, formed in 1996 as a joint venture between Toyota and Matsushita Electric Industrial (subsequently renamed Panasonic), is 80.5% owned by Toyota. Panasonic holds a minority 19.5% share.

Meanwhile, Automotive Energy Supply President Shigeaki Kato reports the supplier will introduce 40-kWh batteries in 2018 and 60-kWh as early as 2020 or 2021. The goal is to achieve a driving range of nearly 200 miles (320 km), he says.

Nissan produces the units at its U.S. battery plant in Smyrna, TN. From June, AESC will begin manufacturing the new battery at its joint-venture plant with Nissan in Zama, Japan, where at present it produces only 24-kWh units.

Kato declines to disclose details about Nissan’s battery operations in Smyrna and Sunderland, U.K., although he reports in Japan the supplier has the capacity to produce 107,000 packs including 87,000 for EVs and 20,000 for hybrids.

Although volumes are comparatively small, all Nissan and Infiniti hybrids use AESC Li-ion batteries. These include the Cima, Fuga and Skyline hybrids (the Skyline is sold as the Infiniti Q50 Hybrid, the Fuga and Cima as Q70 and Q70L hybrids), the Pathfinder and X-Trail hybrids, and the Infiniti QX60 Hybrid.

Kato says the supplier has no space to expand capacity in Japan. However, it doesn’t need to because Nissan’s own battery-production capacity in the U.S. and U.K. is underutilized. When the automaker announced the openings of its Smyrna and Sunderland plants, it revealed it would have the capacity to produce a combined 260,000 battery packs.

AESC’s combined EV battery sales, including to Nissan for the e-NV200 and Renault for the Kangoo Z.E., are estimated at 63,250 units.

Renault uses cells supplied by LG Chem for the Zoe and Twizy EVs which, in 2015, registered sales of 20,587 units.

In China, the Venucia e30 EV, which is produced by Nissan’s joint venture with Dongfeng Motor Group, is believed to use an AESC battery.

Kato declines to disclose sales targets for the supplier, which is 51% owned by Nissan and 49% by NEC and a subsidiary, although he is bullish about the EV market in general and indicates the supplier plans to move into the electric-truck market.

Citing a forecast by SNE Research, Kato says EV sales could grow to more than 4 million units by 2020.

In fiscal 2014, AESC reported sales of ¥48.9 billion ($440 million). It does not count sales from Nissan’s Smyrna and Sunderland battery plants, although batteries made at those facilities use the same chemistry and structure as those produced in Japan.

Honda’s Blue Energy JV supplied 125,370 hybrid batteries to the automaker between January and June 2015. Honda has converted all of its hybrid models to Li-ion, while batteries for its EVs are supplied by Toshiba.

Lithium Energy Japan, Mitsubishi’s JV with GS Yuasa, supplied 20,724 EV and PHEV batteries to the automaker during the same 6-month period. Most (17,724 units) were for the Outlander, the top-selling PHEV in Europe and Japan in 2015.