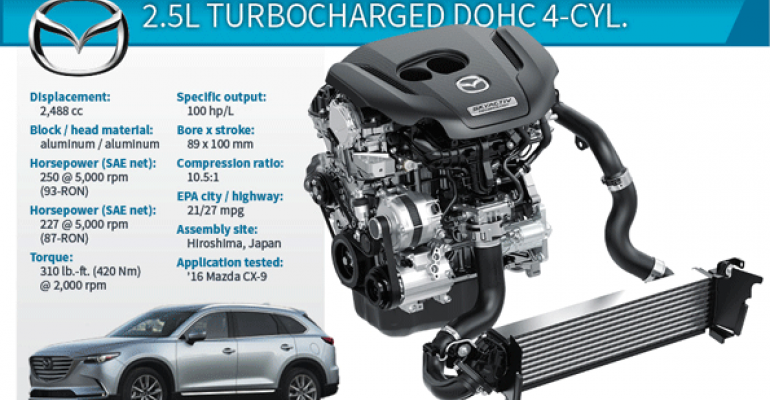 Mazda&rsquo;s Skyactiv-G 2.5T is unique in that its enhanced scavenging technology and cooled EGR make it a new type of downsized turbocharged engine that performs like a torquey V-6.

Auto journalists at the press launch of Mazda’s all-new CX-9 3-row CUV understandably were skeptical when told its new 2.5L 4-cyl. engine would perform like a strong V-6. Mazda development engineer Dave Coleman didn’t help when he said, “Its horsepower is not the highest.”

But then he said: “Its torque is high. And it’s usable torque.”

“We wanted torque at the speed at which you are already driving, so you don’t have to wait for a downshift,” Coleman emphasized.

Unlike typical turbocharged 4-cyl. engines, Mazda’s 2.5L has a torque curve that resembles a turbodiesel’s, so when you’re driving at real-world speeds, available torque at low rpms is enough that you rarely need to push it to high rpms. Its 310 lb.-ft. (420-Nm) peak torque rating at a low 2,000 rpm is truly impressive, while peak power is a respectable 227 hp burning regular gas and 250 hp with premium.

“We wanted to make something clearly distinct from conventional downsized turbo engines,” he says.

Murotani says most variable turbochargers adjust the speed or direction of exhaust gas flowing into the turbine, but the Dynamic Pressure Turbo controls the degree of exhaust pulsation depending on engine speed.

By closing a valve located just before the turbocharger’s turbine and reducing the volume of the exhaust ports, the system reduces interference between exhaust pulses as they exit the cylinder ports. This maximizes the energy of each exhaust gas pulse, causing the turbine to spin faster at low rpms. Engineers liken the closing of the valve at low rpms to holding a thumb over the end of a water hose to increase the spray’s velocity and intensity.

“The increased pressure causes the turbo to spool up quickly even under light throttle, giving the smallish engine a boatload of low-end torque that makes the 4,000-lb.-plus (1,814-kg) vehicle responsive and as fun to drive as a mainstream CUV with three rows of seats can be,” writes WardsAuto Editor Drew Winter.

At higher rpms, when there is enough energy in the exhaust flow, the valves open and the turbine is driven by a steady flow, the same as a traditional turbo.

But the Dynamic Pressure Turbo system isn’t the engine’s only innovative feature.

Mazda is a leader in using high compression ratios to squeeze maximum efficiency from naturally aspirated engines, and it continues this work with the turbocharged Skyactiv-G engine.

A high 10.5:1 compression ratio in this case typically would require extra fuel to be systematically “dumped” into cylinders for cooler cylinder temperatures and to prevent premature ignition or knock.

But they faced numerous hurdles in the process. The first challenge was that the partial restriction of exhaust flow into the turbo creates problematic higher-than-normal exhaust temperatures.

“We solved the problem of knocking through a combination of the Skyactiv-G high-efficiency combustion and high-pressure cooled EGR,” Murotani says.

Mazda managed to achieve a high 10.5:1 compression ratio while maintaining an optimum 14.7:1 stoichiometric air-fuel ratio (at which all the fuel burns and all the oxygen is used), even on regular gasoline, over a very wide rpm range.

In a first for Mazda – and perhaps for all mass-market turbocharged engines – engineers took a different look at cooled exhaust gas recirculation and used a 4-3-1 pulse-converter manifold design that positions the four exhaust runners closely together so cooler air from one cylinder gets vacuumed up by high-flow hot exhaust gas exiting a different combustion chamber like paint gets sucked up and streamed through the nozzle of an airbrush paint gun.

The four runners unite into three and then into one, where they converge at the turbocharger.

The benefit of this 4-3-1 layout is enough suction (or “scavenging”) to draw residual hot exhaust gases from each combustion chamber, in sequence, resulting in lower temperatures in each cylinder as it prepares for the next combustion cycle.

The lower cylinder temperatures allow the engine to run at the higher compression ratio without requiring lots of enrichment to prevent knocking.

And while the Skyactiv 2.5T’s cooled EGR doesn’t improve the official fuel-economy numbers, it does pay dividends for customers to achieve greater real-world efficiency, which ultimately is most important.

Summing it all up, Mazda’s Skyactiv-G 2.5T is unique in that its enhanced scavenging technology and cooled EGR make it a new type of downsized turbocharged engine. The high knock resistance and the scavenging effect realized by its Dynamic Pressure Turbo and high-pressure cooled EGR provide low fuel consumption at middle and high loads leading to excellent official and real-world fuel economy

Even though it looks like engineers have squeezed every ounce of efficiency out of the Skyactiv-G, Murotani says there is nothing stopping it from continuing to get better.

“Engine efficiency improvements are a never-ending story,” he says. “We will continue to improve combustion efficiency, intake/exhaust flow efficiency, thermal efficiency and reductions in losses.”