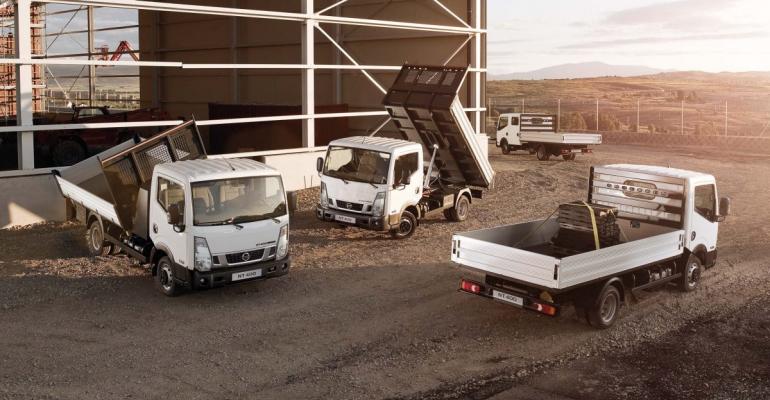 &ldquo;Thankfully it&rsquo;s very easy to pass (electrification) on to vans, because you can fit the powertrain and batteries to the platform because you have the space,&rdquo; says Ponz Pandikuthira, vice president-product planning for Nissan Europe.

LONDON – One of the architects behind the spread of electric powertrains into Nissan’s light-commercial-vehicle range believes urban delivery is driving demand for the technology.

Ponz Pandikuthira, vice president-product planning for Nissan Europe, believes he’s the man who knows what LCV drivers and operators want. Speaking the U.K.’s Society of Motor Manufacturers and Traders, Pandikuthira says: “We have more experience with EVs than any other manufacturer, and we’ve seen a huge uptake in the sales of the e-NV200, especially with delivery companies.

“The threshold for the next generation of EVs is going to be significantly larger than those on the market right now. We’re expecting the step-up in range to take us to 250, 350 and 500 kilometers (300 miles) in range for cars.

“Thankfully it’s very easy to pass that on to vans, because you can fit the powertrain and batteries to the platform because you have the space. The timing (for launching in the U.K. market) is still to be confirmed, but in the future an electric vehicle will be able to reach 500 kilometers in real-world conditions. Not just during the laboratory-testing process.”

It’s not just new vehicles that can benefit from EV technology, Pandikuthira says. “Electrifying commercial vehicles for short haul has its obvious benefits,” he explains. “Something like the NT400 (flatbed truck), for example, is perfect and there are already companies retrofitting electric powertrains to garbage-collection vehicles.

“For the long haul, it’s just a case of getting the battery costs down and also working out how to generate the charge.”

Range anxiety has seen several competing manufacturers lean more toward hybrid powertrains than full EVs, which Pandikuthira thinks is just a necessary stepping stone in the development of EV technology.

“When we see hybrids, we see a pathway to full electrification,” he says. “Nissan is obviously working towards zero-emission future, but there are several ways to get there. We’re already quite advanced in terms of mild- and microhybrid technology.

“For example, the Note (mini-MPV) with E-Power is the best-selling vehicle in Japan. It works with a range extender, which uses a small combustion engine to charge the battery. This is something that could work with a compact commercial vehicle.

“Then there is plug-in hybrid technology. At the moment, this gives a driver 100 miles (161 km) of electric range and lower emissions for urban driving. Obviously, there are challenges with this technology, because when you add a plug-in system you add a huge amount of mass to the vehicle, sometimes up to 400 kg (881 lbs). That’s why we see it as a short-term solution. Plug-in hybrids are a bridge to full-term electrification.”

Pandikuthira says the next vital production step to make is to start designing the vehicle as an all-electric powertrain straight from the drawing board.

“Going forward, we’d like to define vehicles as EVs from the start,” he says. “That makes it more cost-efficient from a development point of view, but over the next five years we don’t think that will be the case for all vehicles. That’s why we design them with a sense of interchangeability.”