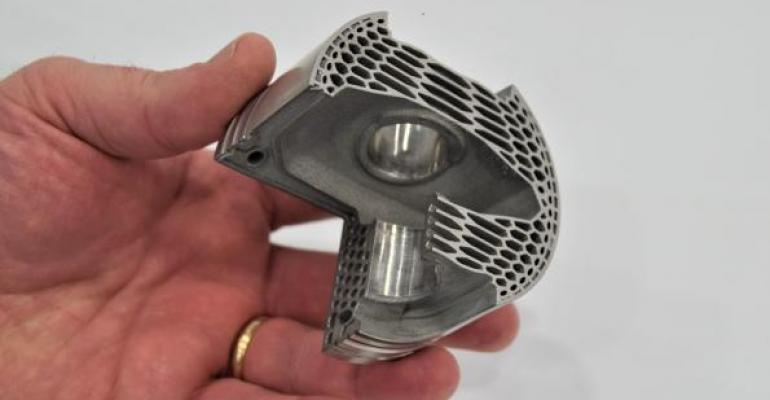 With 3D printing, a piston can be created one layer at a time, and a super-strong honeycomb lattice can replace the solid material, reducing mass about 25%. The supplier says it will have a 3D-printed piston running in a prototype diesel engine soon.

DETROIT – Besides tires, few components on a vehicle take as much punishment as pistons in an internal-combustion engine.

Constantly pumping at speeds up to 39 ft. (12 m) per second under intense heat and pressure, these cylindrical workhorses reside at ground zero as energy is created and harnessed for driving the wheels.

Conventional pistons are cast or forged from aluminum or steel, and automotive engines need at least three and as many as 12 to satisfy demanding consumers.

But IAV Automotive Engineering is piloting the far-out concept of 3D-printing metallic pistons, a process that would revolutionize the production of a vital powertrain component while making it lighter, more resistant to high temperatures and faster to manufacture.

While today’s pistons are solid due to the casting and forging process – with the rare exception of a cooling channel integrated within the crown, behind the ring of some diesel pistons – IAV demonstrates that pistons don’t have to be solid.

Instead, with 3D printing, a piston can be created one layer at a time through additive manufacturing, and a super-strong honeycomb lattice can replace the solid material, reducing mass about 25% while also optimizing the cooling of critical areas, reducing friction and parasitic losses and improving material properties 75% compared with traditional pistons.

Taking that much weight out of the piston has an immense ripple effect, says Robert Dolan, IAV’s director-commercial vehicle and government programs.

“When this is lighter,” he says, displaying the honeycomb structure in a 3D-printed piston prototype, “the connecting rod is lighter, the counterweights on the crankshaft are lighter. If they’re lighter, the crank itself can get lighter, less loads are going into the bearings and there’s less friction.”

But before the industry migrates much of its piston production to 3D printing, Dolan says it is likely the process will be used to quickly fabricate pistons early in an engine development program for prototype testing in low volume.

“We are currently engaged in development projects for both compression-ignition (diesel) and spark-ignition (gasoline) engines and are using 3D-printed pistons to both save time in development test cells and to help develop this process further,” he tells WardsAuto.

With conventional casting, it takes about 12 weeks to manufacture a piston for an engine-development program and about another week to have it machined. With 3D printing, a piston can be manufactured and machined in less than a week for combustion testing within a prototype cylinder, Dolan says.

Along the way, in that testing process, engineers can adjust compression ratios, change bore offsets and vary the flow of cooling oil. And with 3D printing, a manufacturer can quickly fabricate a different piston in the middle of that testing without having to wait 12 weeks for it to arrive.

“To be able to, in the middle of one of those programs, in a matter of a few days, put in a different geometry-set piston based on learnings from the last week is really helpful,” he says.

The more sophisticated the piston, such as a heavy-duty diesel engine requiring a complex bowl to facilitate optimum combustion, the greater the need for a reduction in time to build prototype parts, says Thaddaeus Delebinski, IAV’s business unit director for diesel engines.

“It takes time to cast (a piston) and do refinements, and it takes more time to do it again,” Delebinski says. “If you can just update the design, then print the piston and have your different design installed within weeks, it’s a big advantage.”

A 3D-printed piston, because it can integrate structural reinforcement exactly where it’s needed while being lighter overall, will resist heat more effectively and maintain dimensional stability, Dolan says.

The hotter a piston gets, the bigger it gets and starts to lose its geometry, causing it to grab the cylinder wall. So the ability to create cooling channels within a piston while it is being 3D printed is groundbreaking. “When you can incorporate advanced cooling features in here, you win,” Dolan says.

And Delebinski notes, a piston that stays cooler can run at higher speeds and achieve higher power density.

​IAV sees other opportunities for 3D printing of powertrain components, such as piston pins, engine blocks and turbine or compressor wheels.

In customer programs, the supplier has used 3D printing to fabricate cylinder heads. The result was a 30% reduction in overall weight, a 50% reduction in machining and a 10% reduction in exhaust valve bridge temperatures.

The supplier sees these gains as important because cylinder heads face extreme thermal and mechanical loads. Plus, demand for increasing power density from engines combined with the use of alternative fuels such as compressed natural gas results in far higher peak cylinder pressures.

But for now, the focus is on pistons, and Dolan says IAV will have a 3D-printed piston running in a prototype diesel engine fairly soon. IAV is not a manufacturing company but instead helps automakers and suppliers design, test and analyze new technologies.

“We see some customers – and I’m not talking next year, but in the future – where this is the manufacturing technology they could transition to,” he says. “We’re in conversation with some of them now.”

Producing pistons with 3D printing is not cheap, so the transition will take time. But Dolan says 3D printers can be built to fabricate as many as 40 pistons at one time.

And the cost to 3D-print a piston is “a drop in the bucket” compared to the expense of running an engine test cell and waiting 12 weeks for a conventionally cast piston.

“You save a couple days there, and you buy yourself a truckload of pistons,” Dolan says.