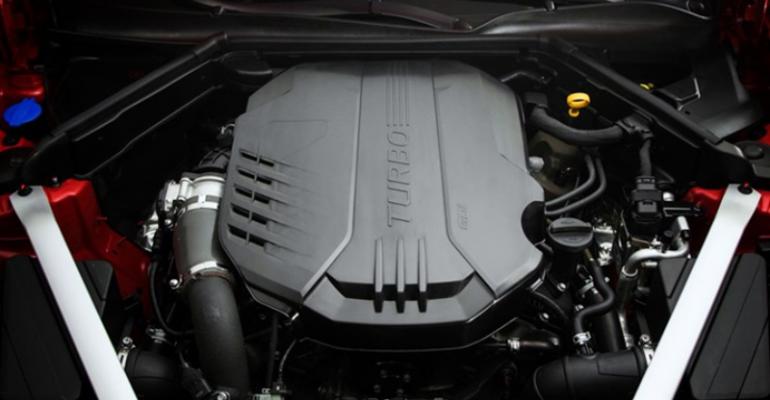 The automaker&rsquo;s direct-injected V-6, also bound for the smaller Genesis G70 sedan, features a sodium-filled stem and head on each exhaust valve, which the automaker says is an industry first among V-6s. The powertrain is one of more than 30 contenders in the 2018 Wards 10 Best Engines competition.

SOUTHFIELD, MI – South Korea’s Hyundai launches its first gasoline twin-turbo V-6, with the engine arriving first in the Genesis G80 luxury mid-large sedan and by December in the U.S. in the Kia Stinger.

Hyundai engineers like to compare the new turbocharged Lambda engine to BMW’s B58 3.0L turbocharged inline 6-cyl., a two-time Wards 10 Best Engines winner. But the Bimmer employs a single twin-scroll turbocharger, so its 335 hp comes up short of the others.

Hyundai’s all-aluminum, direct-injected V-6, also bound for the smaller Genesis G70 sedan, features a sodium-filled stem and head on each exhaust valve, which the automaker says is an industry first among V-6s.

Valve stems have been sodium-filled for decades, but extending that treatment down to the head reduces weight and enables the valve to dissipate heat and stay cooler, improving spark-advance performance, Bill Ickes, powertrain senior manager-Hyundai/Kia America Technical Center, tells WardsAuto in a deep-dive presentation on the twin-turbo V-6. 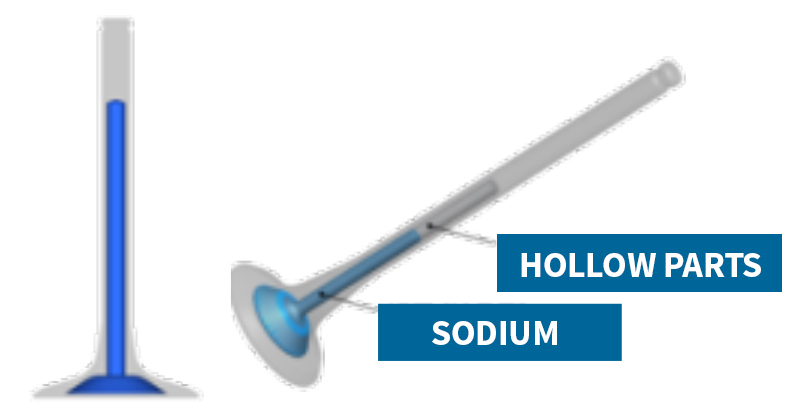 “(That) is really key so you can enhance both performance and fuel economy,” he says. “You get the spark-advance you want, and you do not have to worry about durability by keeping the valves cool.”

Another technical component of the new engine that Hyundai is claiming as a first for a V-6 is the cam-torque-actuated mid-lock continuously variable valve-timing system.

At startup, the intake cam phaser is locked in the middle position to deliver faster transient response. During casual driving, the system allows for delayed closing of the intake valves, which reduces pumping losses and fuel consumption.

The previous Lambda engine allowed for up to 50º of cam phasing, but the new twin-turbo 3.3L is capable of up of 85º of phasing, allowing rapid valvetrain adjustments in response to throttle inputs.

Not a first but an advancement for Hyundai V-6s is the integration of an exhaust manifold in each cylinder head.

“That used to be a big clunky piece of nodular pearlitic cast iron that added mass” and was prone to leaks, Ickes says.

Without separate exhaust manifolds, each turbocharger attaches directly to the exhaust port of each head, improving packaging and allowing the catalytic converter to heat up faster, reducing cold-start emissions. “It can deliver the emissions we need to be compliant in all 50 states,” Ickes says.

Water jackets within the heads have been modified for increased volume for better cooling. An ancillary benefit: cooler exhaust helps prolong the life of the catalysts.

Hyundai also uses an electronically controlled thermostat – a coil-heater type that can open at variable temperatures. The system allows coolant temperatures to be controlled with greater precision.

For instance, warming the engine coolant rapidly and keeping it as warm as possible helps to warm the oil inside, which reduces friction, says John Juriga, director-powertrain for HATCI. “And there are times where you’re under heavy-load conditions where you want to have max coolant temp, and it could be independent of your actual thermostat water temp because depending on your speed load – what you want to accomplish performance-wise – sometimes you would prefer to have more flow and sometimes less flow, so it gives the option to dictate,” Juriga says.

The high-pressure direct-injection system functions at 200 bar (2,900 psi). The combustion system uses a high-energy ignition coil that boosts spark energy from 55 mJ to 80 mJ, which

The result, based on Wards 10 Best Engines testing of the G80, is an engine with minimal turbo lag. The Stinger, which also will be tested, weighs about 700 lbs. (318 kg) less, so it’s bound to feel more responsive. 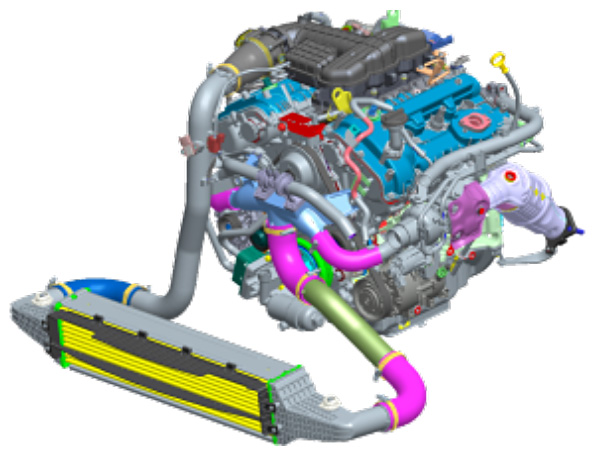 The turbos were optimized with the CVVT system to get improved fuel economy and performance, with Ickes noting an 8% higher boost pressure and 6/10ths of a second faster response time on the cam phasing side.

Efforts undertaken to limit noise, vibration and harshness include using a new plastic dual recirculation valve within the turbocharger.

For improved harmonics, Hyundai has gone from a 2-point-mount on the timing chain to a 3-point mount, allowing the guide to better isolate the chain and keep it properly aligned.

For G80s and Stingers sold in North America, Hyundai is using damping material to limit noise from the high-pressure fuel pump atop the engine.

Fuel-economy ratings for the Stinger and G70 are not yet available.

The Genesis G80 is on sale now at select U.S. Hyundai dealers. The Stinger arrives at Kia U.S. dealers in December, while the Stinger’s platform-mate, the Genesis G70, is bound for arrival in spring 2018.