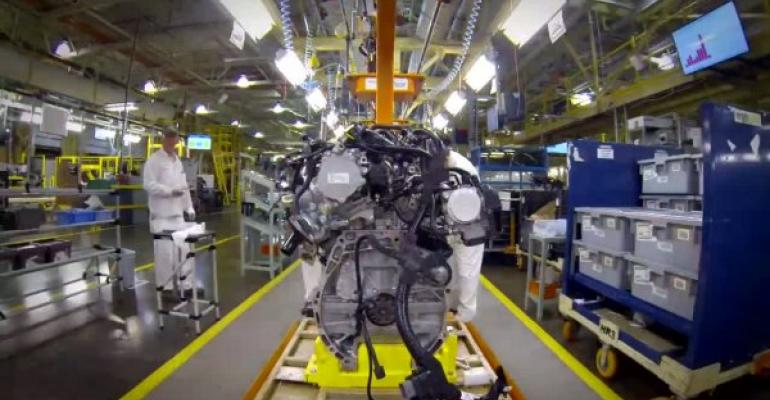 &ldquo;China will adopt some of the world&rsquo;s most stringent regulations in terms of fuel economy,&rdquo; Honda automotive R&amp;D chief Keiji Ohtsu says. &ldquo;In 2025, we don&rsquo;t expect to be able to sell conventional internal-combustion engines, meaning we will be selling mostly hybrids including plug-in types.&rdquo;

TOKYO – Honda is moving full speed ahead with the implementation of a powertrain plan announced at the 2013 Tokyo auto show.

With five new engines already on the market and two to come in 2016, plus three CVTs, the automaker is setting its sights on 2020 and beyond.

WardsAuto: At the 2013 Tokyo Motor Show, Honda rolled out a new series of downsized, turbocharged engines with plans to introduce them by 2016. What is the status of the rollout?

Ohtsu: We have three new gasoline engines – 1.0L, 1.5L and 2.0L – which are being adapted to regional needs in North America, Europe and China, all markets where emissions regulations are becoming increasingly stringent. China offers the added incentive of a tax break for smaller-displacement engines, further encouraging downsizing.

In addition, we are focusing on weight reduction, changing V-6 to inline-4 engines and inline 4s to 3-cyls.

Ohtsu: On the Step Wagon in April and Jade RS in May, both in Japan. We adopted the 2.0L turbo on the Civic Type R in October, also in Japan, and will begin mass production of the engine next March in the U.S. for our Civic lineup. We are also readying the 1.5L unit for the China market. The 1.0L engine is still under development.

WardsAuto: What plans do you have for your 2.4L naturally aspirated engine?

Ohtsu: Where possible, we hope to replace it with the downsized 1.5L unit.

WardsAuto: Will you discontinue it?

Depending on the market and region, but particularly in Asia and other emerging markets, we will continue offering our naturally aspirated lineup which tend to be less costly.

WardsAuto: What share will downsized turbocharged engines claim by 2020?

Ohtsu: Maybe 30%. In addition, we expect the ratio of hybrids to grow, although for the time being Honda won’t use turbocharged engines in our hybrids.

WardsAuto: And your hybrid sales target?

WardsAuto: So, combined – hybrids and downsized turbo engines – will account for 50% of sales?

WardsAuto: And in the case of hybrids, you've made a complete shift to lithium-ion batteries?

Ohtsu: For all models, yes. (The Accord is available in both conventional dual-motor and plug-in types.)

WardsAuto: It is probably premature to discuss Honda’s next stage of development since your 1.0L turbo engine is still not on the market. But in general terms, what comes next?

Ohtsu: We’re just approaching the midway point in our plan. We eventually want to achieve heat efficiency of 50% through lean turbocharging. We will focus on HLSI, or homogeneous lean-charge spark-ignition technology.

WardsAuto: And you expect to complete technical development in 2020?

WardsAuto: Then when will you introduce the engine to the marketplace?

Ohtsu: We don’t have a specific model in mind yet.

WardsAuto: Do you consider HLSI technology evolutionary or revolutionary?

Ohtsu: It is not revolutionary. Of the two leading combustion technology candidates – the other being HCCI, or homogeneous-charge-compression ignition – we have opted for spark ignition because we feel that HCCI is limited in terms of rpm, torque and operational band or range. HLSI is better suited to Honda’s engine concept. We’ve researched both, of course.

WardsAuto: What sort of fuel-economy benefits do you envision – 30%?

WardsAuto: And in the U.S.?

Ohtsu: We’re probably looking at a 25% improvement. But it depends on the transmission and also vehicle weight.

WardsAuto: Is Honda planning any other turbocharged engines?

Ohtsu: We will add a 3.5L turbo for the (Acura) NSX hybrid next year. The engine will be produced at our Anna, OH, powertrain plant.

WardsAuto: Will there be any further additions to your 4-cyl. lineup, currently 1.5L and 2.0L?

Ohtsu: There will be nothing for Honda, but we’re considering a new exclusive engine for our Acura lineup. However, we have no specific plan as yet.

WardsAuto: Is there any chance of Honda reducing the number of cylinders in your 1.5L engine (which currently has four)?

Ohtsu:The torque range in our engine lineup is 96 lb.-ft. (130 Nm) to 273 lb.-ft. (370 Nm). If we improve heat efficiency to 50%, we would achieve a wider torque range than at present. Thus to answer your question, no. We will not reduce the number of cylinders.

WardsAuto: Moving on to diesel engines, what is the current situation?

Ohtsu: Our 1.6L turbodiesel, which we produce at Honda of the U.K. Mfg., is our main engine. A new 1.5L unit (manufactured at Honda Cars India) is less expensive and will be sold in India and other parts of Asia.

WardsAuto: Do you have plans to export your i-DTEC turbodiesel to the U.S. market? And can you meet U.S. emissions regulations?

Ohtsu: I believe we can meet the regulations. But from a cost standpoint, diesels are really expensive. So we have no plans to introduce the engine in the U.S.

WardsAuto: How much more expensive – 50%?

Ohtsu: More. Also keep in mind that the price differential between diesel fuel and gasoline is very small in the U.S. There’s no fuel-savings incentive.

WardsAuto: Added to which the Volkswagen scandal has hurt the image of diesels.

WardsAuto: Switching to Honda’s 0.66L mini or kei engine, which was redesigned in 2011, will Honda eventually merge it with the 1.0L powerplant?

Ohtsu: No. Our kei engine is unique in terms of how it’s used and packaged. Even if the engines were to have the same displacement, the engine and transmission layout would be different. And especially because of the Japanese market (where minis account for nearly 40% of sales), I don’t think that the category will disappear.

WardsAuto: On the subject of transmissions, Honda announced that it would introduce a new 10-speed automatic. ZF currently supplies a 9-speed automatic to Acura for the TLX from its plant in Laurens, SC. Will this new 10-speed be a Honda unique product?

Ohtsu: Yes. We will manufacture it in-house for the U.S. market for cars powered by V-6 engines.

WardsAuto: Does Honda have plans to increase gears beyond 10?

WardsAuto: And your other transmissions?

Ohtsu: We currently offer an 8-speed dual-clutch transmission, also for the Acura TLX.

WardsAuto: When will you introduce the 10-speed?

WardsAuto: Looking at future powertrains, the Japanese government believes fuel-cell cars will take off around 2025. Some years back, a Honda research executive reported that your 2020 price target for a fuel cell car would be ¥4 million, $35,000 at the current exchange rate, which is equivalent to an upper-end Accord. That was a bit optimistic, but not terribly so. What is your view today in light of Honda’s planned launch next March of the new Clarity?

Ohtsu: We think that fuel-cell vehicles will come into the mainstream in 2030, along with battery-powered electric cars. We also feel that going forward hydrogen will be the best fuel alternative.

WardsAuto: What does “mainstream” mean – 5% of sales?

Ohtsu: We still don’t have a clear idea, but the common understanding is 10%.

WardsAuto: As head of automotive technology strategy, how do you see the Asian market evolving in the coming five to 10 years with respect to powertrains, particularly hybrids?

Ohtsu: In Southeast Asia, we will supply our current lineup of naturally aspirated engines. We expect fuel-economy regulations to become more stringent. Therefore, we want to establish our latest technologies first in industrialized markets – namely, North America and Europe – and steadily reduce cost so that we can transfer the technologies to Southeast Asia.

Ohtsu: China will adopt some of the world’s most stringent regulations in terms of fuel economy. In 2025, we don’t expect to be able to sell conventional internal-combustion engines, meaning we will be selling mostly hybrids including plug-in types.

Ohtsu: Like in Southeast Asia, we will supply naturally aspirated engines plus 1.5L diesels. In the past, there has been preferential treatment toward diesel cars. That is no longer the case. We anticipate a steady switch to gasoline.

Looking at the bigger picture, our intention is to reduce our carbon footprint. Whether through downsizing and raising thermal efficiency or hybridization and introducing fuel cells, the powertrain will be central to whatever we do.