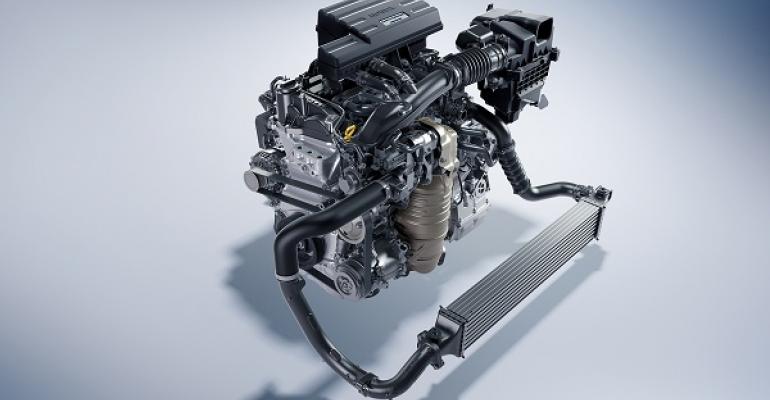 Honda’s direct-injected 1.5L turbo 4-cyl. Earth Dreams engine is creating a nightmare for the company as it tries to resolve a severe gasoline oil-dilution problem it says is caused by cold-weather operation.

Nearly 400,000 of Honda’s best-selling CR-Vs and Civics sold in the U.S. will be updated to prevent excessive gasoline dilution of engine oil that is blamed for poor performance in the automaker’s 1.5L direct-injected turbocharged 4-cyl. engines.

Honda says the problem occurs when the engine doesn’t warm up enough to evaporate unburned fuel that slips past piston rings and infiltrates engine oil. The automaker notes oil dilution is normal in all internal-combustion engines, but especially in direct-injected turbocharged engines.

Honda spokesman Chris Martin says the 1.5L’s cooling system is highly efficient, and therefore the engine is slow to reach a normal operating temperature that would cause fuel to readily evaporate and be routed back to the combustion chamber via the crankcase ventilation system. Short drives and extreme cold temperatures exacerbate the problem, sometimes resulting in owners reporting oil levels above the “FULL” line on the dipstick.

“If an owner repeats that short-drive/cold-weather cycle multiple days in a row, the level of unburned fuel in the oil can incrementally increase each time, raising the oil level on the dipstick and, over the long term, potentially leading to misfires and other engine symptoms,” Martin says.

A second bulletin issued in December and updated in February adds ’16-’18 model-year 1.5L turbo Civics in the same 21 states. Owners of affected vehicles are being notified by the manufacturer to bring vehicles to dealers for repairs.

Martin says the updates involve transmission and engine software changes that allow the engine to warm up quicker, reducing the possibility of unevaporated fuel collecting in the engine oil early in the drive cycle. Ignition timing, CVT control and air-conditioning operations are modified to help the engine warm up and retain heat.

Honda is addressing similar problems in vehicles with 1.5L turbo engines in China and Canada.

Chinese regulators ordered a recall to repair 350,000 1.5L-equipped vehicles, even in regions where consumers were unlikely to experience the condition, Honda says.

In Canada, a service bulletin issued last October covers the same vehicles and model years as in the U.S. and extends warranty coverage to six years with no mileage limit on “certain engine components” that as-yet aren’t specified.

Even though Honda maintains the problem is related to cold-weather operation, Martin notes owners in warmer climates may notice normal variations in oil levels that do not necessarily represent a problem.

“For owners who diligently check their oil level, seeing it above their expected level can be disturbing,” Martin says, adding that dealers are being asked to help educate owners about oil-level expectations.

Honda is not considering an expansion of the U.S. product update to warm-weather states. However, the automaker has issued a service bulletin to cover what the company says is the unlikely possibility that vehicles might develop excessive oil dilution outside the 21 cold-weather states. In addition, an owner who permanently moves to one of the cold-weather states can request the repairs.

The issue already has prompted at least one class-action lawsuit alleging excessive oil dilution is causing engine damage due to high wear on inadequately lubricated components.

That’s not surprising to Gary Morris, a longtime Honda owner who says he’s experienced excessive oil dilution in his 1.5L-equipped ’17 and ’18 CR-Vs despite living in Louisiana and typically only driving longer distances. Morris says he has seen oil levels an inch above the “FULL” mark on his dipstick.

“It’s going to be the biggest and most costly problem they’ve ever had,” predicts Morris, whose arbitration case against Honda was denied. “This is going to be Honda’s Waterloo.”