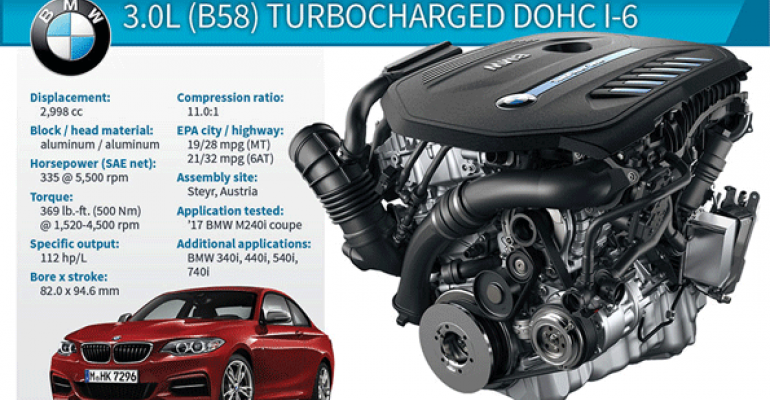 &ldquo;The main reason why we have kept the inline 6-cyl. is there is no other way to have the smoothness or the responsiveness, the turbine-like feeling when revving the engine,&rdquo; says Markus R&uuml;licke, BMW&rsquo;s head of construction design for in-line petrol engines.

Almost as predictable as sunup and sundown is the near-certainty that a BMW inline 6-cyl. engine will take home a Wards 10 Best Engines trophy, year after year. 2017 marks the 27th such award in BMW’s near-unbroken string of high honors for its I-6 engines, including times when two versions won the same year, and the second straight for its 3.0L B58 iteration.

All new in 2016, the B58 turbo I-6 is the core member of a completely new all-aluminum modular “B” engine family that shares pistons, rods, valvegear and other key parts with 3- and 4-cylinder siblings, all with 500 cc cylinder displacements. It also is the last remaining I-6 available in a U.S.-market car.

“The main reason why we have kept the inline 6-cyl. is that there is no other way to have the smoothness or the responsiveness, the turbine-like feeling when revving the engine,” says Markus Rülicke, BMW’s head of construction design for in-line petrol engines. “That is worth more than the packaging challenge of the added length.”

But what about weight distribution? Doesn’t the straight-six engine’s added length put more of its mass up front compared with a V-6?

“It depends how you put the engine in reference to the front axle,” he responds. “We put the front axle quite far forward, so most of the engine weight is behind it,” he says. The I-6 also is lighter than a comparable-displacement V-6, and it’s easier to service with only one cylinder bank instead of two.

The main design objectives for the new B58 were increased efficiency, quicker throttle response and even smoother operation vs. the older-design same-displacement N55 turbo I-6. To meet those objectives, it features direct fuel injection, Double-VANOS variable camshaft timing, “TwinPower” (twin-scroll) turbocharging and a redesigned Valvetronic fully variable valve lift system. Its block, head and valvegear also are redesigned for a 5-mm longer stroke, a 2-mm smaller bore diameter and a higher 11.0:1 compression ratio, while its turbocharger’s turbine and compressor wheels are larger than the N55’s by 6% and 10% respectively.

For improved response and power output, the turbocharger is a new Bosch Mahle Turbo Systems unit. A new water-to-air intercooler is integrated into the intake plenum, and a new engine-mounted encapsulation system helps retain heat for easier restart, quicker warm-up and lower emissions.

Partly thanks to a better-balanced crankshaft and a new stiffer, lighter crankcase, the B58 also improves on the N55’s already excellent smoothness and quietness.

In addition, Rülicke believes the B58’s LDS cylinder liner coating may be an industry first. This coating is applied by heating conductive metal wire to its melting point, then electric arc wire high-pressure spraying it onto the cylinder barrels. The resulting 0.3 mm layer of ferrous material is extremely wear-resistant and very efficient at transferring heat from the combustion chambers to the crankcase and the coolant ducts.

One other key technology is a heat management module designed to handle high temperatures. “You always try to keep the coolant around 100° C to 105° C (212° F to 221° F) to have the lowest friction possible,” Rülicke explains, “so we can regulate this very, very well.” Another is an electric turbocharger wastegate with a very wide opening angle, which he says helps heat up the catalyst quickly and improves throttle response due to its much quicker reaction time compared with a pressure-actuated waste gate.

While the 2016 10-Best trophy was earned by the 320-hp version of the B58 that WardsAuto judges evaluated in a ’16 340i sedan, this 335-hp version was tested in a smaller and quicker ‘17 M240i coupe. The primary difference between the two, according to Rülicke, is increased boost pressure, along with “de-throttled” intake and exhaust systems and a “fine-tuned, tailor-made calibration for the M240i.”

By “de-throttled,” he means slightly upsized for increased flow. “We modified the intake system to have less pressure drop, increased the area about 5%, tried to avoid sharp edges and did a lot of fine tuning. We also increased the diameters of the exhaust system by 5 mm (0.2 in.),” he says. There’s also a new muffler that provides less restriction and a sportier exhaust note.

We ask whether the standard stop/start feature may be smoother than earlier versions. “It is a bit smoother,” Rülicke says, “because we try to make it quicker. The 6-cyl. is a very forgiving engine for the auto start/stop, but we did refine the system because we know that it had not been very well-received, especially in the U.S. But we don’t make the engine mounts as weak as some competitors’ because we still want the sportiness and responsiveness that you can feel, not to lose it in weak engine mounts.”

Rülicke and his team have been delighted with such reviews: “It is very nice at the end of your work on a new engine generation to receive such positive feedback,” he says. “I can’t tell you much about it now, but we already are working quite hard on an even better version.”