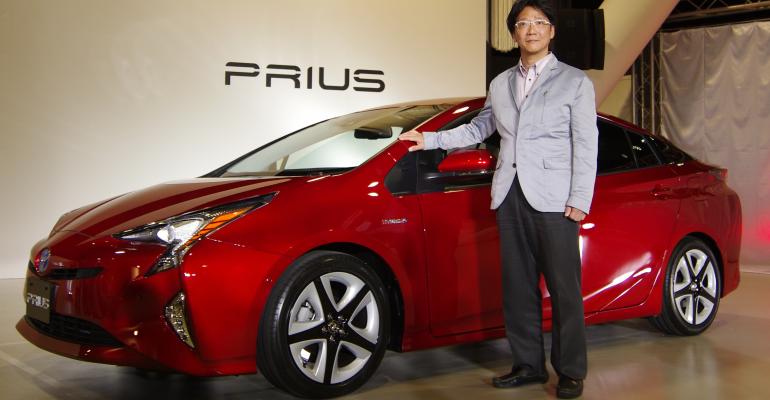 Since the Prius hybrid&rsquo;s launch, Toyota has sold 4.3 million units. Honda, ranked second, has sold 2 million hybrids. The rest of the industry combined has delivered an estimated 2 million.

TOKYO – The Prius turned 20 this month.

The world’s best-selling hybrid car went on sale Dec. 10, 1997. Toyota sold only 323 of the bubble-shaped cars that year, enough for it to win the “Japan Car of the Year” award, although most models were not delivered until after the New Year.

Since its launch, Toyota has sold 4.3 million units. Cumulative hybrid sales by the automaker, including 36 other Toyota and Lexus models introduced over the past two decades, have grown to 11 million, including 1.5 million this year. Of these, 220,000 are Priuses.

The Prius is profitable, according to analysts. No other automaker can make that claim about any of their electrified models.

Hybrids were not new to the industry when Toyota launched the Prius. They date back to the turn of the previous century in Europe. These early vehicles, plus others in the decades that followed, were developed for the purpose of demonstrating that the technology worked.

Fast-forwarding to the 1990s, hybrids became the focus of the Clinton Admin.’s Partnership for New Generation Vehicles program. In 2001, they were included in California’s Zero Emission Vehicle (ZEV) program as a stopgap when the state couldn’t meet its zero-emissions or all-electric-vehicle sales targets.

Ironically, the decision by California to retreat from its mandate effectively killed General Motors’ EV1 electric-car program around the turn of the century. The same decision effectively gave life to the Prius by granting it “advanced technology” partial zero-emission vehicle (AT-PZEV) status.

The EV1 and Prius crossed paths in another part of their separate stories by way of a Michigan startup named Ovonic Battery, at the time a wholly owned subsidiary of Energy Conversion Devices. ECD was created by the legendary American inventor Stanford Ovshinsky.

Batteries are Part II of the Prius story.

In their simplest form, hybrids combine two power sources to propel the car – generally a gasoline engine and an electric motor, which runs off a second battery. The car’s main battery continues to operate independently for starting the engine and powering various electrical systems including lighting, wipers and steering. The second battery is rechargeable.

Toyota’s hybrid differed from previous hybrids because it split the engine’s power, transmitting it separately to the vehicle’s wheels and a generator. The generator converts its portion of engine power into electricity to drive the car’s electric motor or, during braking, to charge the battery.

This energy-regeneration function during braking contributes to fuel efficiency gains ranging as high as 50% over standard cars. Other features contributing to improved mileage are high-efficiency motors, power electronics and the Atkinson-cycle engine.

Toyota exhibited a Prius concept at the 1995 Tokyo auto show. In March 1997 the automaker outlined its hybrid technology at a press conference in Tokyo.

The speculation was that Toyota would adopt the technology for a new car named “Prius” which, in Latin, means first. In fact, the Prius would be the first mass-produced hybrid car.

Toyota had rushed the car’s launch, assembling a team of some 2,000 engineers, to take advantage of the publicity surrounding the Kyoto Conference on Climate Change held during the first week of December 1997. COP3, as the conference was known, set numerical targets on reducing greenhouse gases for the first time.

More than 170 countries signed the accord on Dec. 11, the day after the Prius went on sale.

“When Toyota launched the Prius, no one thought it would succeed in the marketplace so soon,” says Koji Endo, an industry analyst at SBI Securities. “Looking back, I think we have to give huge credit to the automaker. The only mistake Toyota made is that it thought the hybrid world would continue much longer than it now appears likely.”

Adds veteran analyst Takahashi Nakanishi, CEO of Nakanishi Research Institute: “Toyota is overconfident about its hybrid technology and the transition to full-electric technology. I am not 100% convinced about that. It all depends on the battery.”

When Toyota announced its hybrid system in March 1997, it did not report it was working separately to develop batteries with two Matsushita Group companies and, by extension, Ovonic Battery, from which the former Matsushita Battery Industrial Co. had entered into a licensing agreement.

In December 1996, three months before the announcement, the automaker established a joint venture with Matsushita Battery and its parent, the former Matsushita Electric Industrial Co., to develop and manufacture batteries for future cars. The JV’s name was Panasonic EV Energy.

Toyota Automatic Loom Works was developing the technology for its forklift business in hopes of converting from diesel to battery power to promote cleaner air inside factories and warehouses.

PEVE would supply nickel-metal-hydride batteries to Toyota and Honda for the limited-production RAV4 and EV-Plus electric cars, both introduced in 1997, as well as the Prius.

Japan already had staked out a leadership position in NiMH batteries for small applications including consumer electronics and early-generation handheld phones and laptops.

Moving upmarket to cars was not a simple matter. For both Matsushita Battery and PEVE, Ovonic’s technology and patents were needed.

In 2001, Ovonic Battery sued Matsushita Battery, PEVE and Toyota for alleged patent infringement of its NiMH technology. It negotiated a substantial cash settlement in 2004.

The Japanese supplier claimed had improved the technology. But Subhash Dhar, the founding president of Ovonic and now an industry consultant, says, “If I have a patent on a tire and you improve the tread, you still need my tire.”

Ovonic has gone through multiple ownership changes and currently is a subsidiary of chemical company BASF. Energy Conversion Devices filed for bankruptcy in 2012.

In October 2008, Matsushita Electric consolidated several operations including Matsushita Battery under the name Panasonic Corp. The following month it entered into negotiations to acquire Sanyo Electric, Japan’s second-largest battery maker. The acquisition was completed in April 2011.

In October 2008, Matsushita Electric joined several operations including Matsushita Battery to form Panasonic Corp. In November of that year, it entered into negotiations to acquire Sanyo Electric, Japan’s second-largest battery maker. The acquisition was completed in April 2011.

In 2009, PEVE began producing Li-ion batteries. Those batteries were adopted for 7-seat versions of the Prius Alpha (sold as the Prius c in the U.S.) and later for the eco version of the Prius. In 2010, Panasonic EV Energy was renamed Primearth EV Energy.

PEVE reports Toyota is conducting a feasibility study on producing Li-ion batteries in the U.S. Based on the Dec. 13 announcement that the automaker and Panasonic will work together to develop prismatic batteries, it is likely Toyota will adopt Panasonic technology for its next-generation EV and plug-in hybrid batteries. Whether they will be produced by PEVE or Panasonic is an open question.

Across the Pacific, General Motors was developing the EV1 electric car about the same time Toyota was preparing to launch the Prius. The first 660 produced, out of a total production run of 1,117 between 1996 and 1999, were hampered by the use of a lead-acid battery. The supplier was Delco Remy America, a one-time operating division of GM.

The car initially had a range per charge of only 70 miles (112 km) in city driving, clearly not enough, although range depended on who was driving the car and under what conditions (with or without the air-conditioner operating, for instance). Robert Galyen, who headed the EV1’s battery team, said he personally succeeded in achieving 140 miles (224 km).

The automaker switched to NiMH batteries in 1999, boosting range to more than 100 miles (160 km). The battery’s supplier was Ovonic, which by then had become a GM subsidiary.

GM sold the operation, GM-Ovonic, to Texaco in October 2000, two years before it ended the project, effectively pulling the plug on the EV-1, made famous in the 2006 documentary “Who Killed the Electric Car?”

When all was said and done, GM leased 660 EV1s fitted with lead-acid batteries and 457 with NiMH types. Toyota reportedly leased 1,484 first-generation RAV4 EVs in California, while Honda leased an estimated 340 EV-Plus models in the U.S. and Japan.

The common thread: All NiMH batteries either were supplied by Ovonic or were based on Ovonic’s technology.

While Toyota is the only company to make a profit from hybrid car sales, no one makes money from all-electric car sales. Everybody else depends on subsidies. And even Toyota would lose money on its most “electrified” car, the Prius Prime plug-in hybrid, without subsidies.

The reason is battery costs, which remain prohibitively high. For all-electric cars such as the Nissan Leaf, Tesla Model S and BYD e6 in China, batteries cost upwards of $10,000 (¥1.1 million) if the automakers hope to deliver a 200-mile (320-km) range, the minimum distance considered necessary to compete with conventional cars.

Dhar expects lithium-ion battery costs to fall to $125/kWh by 2022. That is still $7,500 not counting motors and other electric powertrain components.

In 2012, Toyota launched the first-generation Prius plug-in hybrid, the Prius PHV, fitted with a Panasonic Li-ion battery. The automaker launched the second-generation model with a new, longer-range Panasonic battery in November 2016.

Analysts believe the Prius Prime has a cost advantage over most PHEVs on the market since it shares several hybrid-system components with the standard Prius, including the motor, generator, parts of the power-control unit and gasoline engine. The Prime’s one-way clutch is a new component not available in the standard Prius.

Between January and October 2017, Toyota sold 43,323 Primes according to the EV Sales Blog, making it the world’s second-ranked “plug-in” car (including both plug-in hybrids and EVs) behind BAIC Motor’s EC Series and ahead of the Tesla Model S and Nissan Leaf.

Toyota is the only major global OEM without an all-electric car in its lineup and instead is focusing on fuel-cell technology. That may change, although perhaps not as quickly as analysts suggest.

In 2015, Toyota announced plans to cut carbon-dioxide emissions 90% from 2010 levels by 2050. To achieve those cuts, the automaker will need to move substantially into the EV segment while expanding its FCEV lineup.

At a December 2017 briefing on electrification technologies, the automaker indicated it is ready to move into the EV segment at any time because of the expertise it has built up in hybrids.

The automaker reports it has several all-electrics in the pipeline and at the 2017 Tokyo auto show, Executive Vice President Didier Leroy reaffirmed Toyota’s commitment to introduce solid-state technology in the early 2020s. Toyota has assigned 200 engineers to the undertaking.

Analysts are not so optimistic and think the latter part of the decade is a more realistic timeframe for solid-state technology to work its way through the product-development process. Moreover, Toyota rarely introduces a new technology relating to powertrain or safety features for more than niche applications at the outset.

For instance, before launching the Mirai fuel-cell car in December 2014 the automaker test-marketed several FCEVs, including two based on the Highlander SUV. The second, called the FCHV-adv, was leased to fewer than 150 owners in 2008.

Toyota’s plan was to lease and sell 3,000 Mirais in the first three years. It sold nearly 4,000. The Mirai uses a NiMH battery supplied by PEVE.

In September, Toyota announced it would work with Mazda and Toyota supplier Denso to coordinate strategies regarding EV development. In November, the automaker signed a memorandum of understanding with Suzuki to join forces to produce electric cars in India. The expected timetable is 2020.

Suzuki, Denso and Japanese battery maker Toshiba announced earlier this year they would manufacture Li-ion batteries in India. Production is expected to begin in 2020 at Maruti Suzuki India’s Gujarat plant.

In 2018, Chinese battery maker Contemporary Amperex Technology (CATL) could pass Panasonic to become the world’s largest battery maker. CATL, which supplies BMW, Mercedes and Volkswagen in China, is a strong candidate to supply VW and Mercedes in Europe.

In an ironic twist, Galyen, who headed the EV1 battery team while working for Delco Remy, is chief technology officer at CATL.