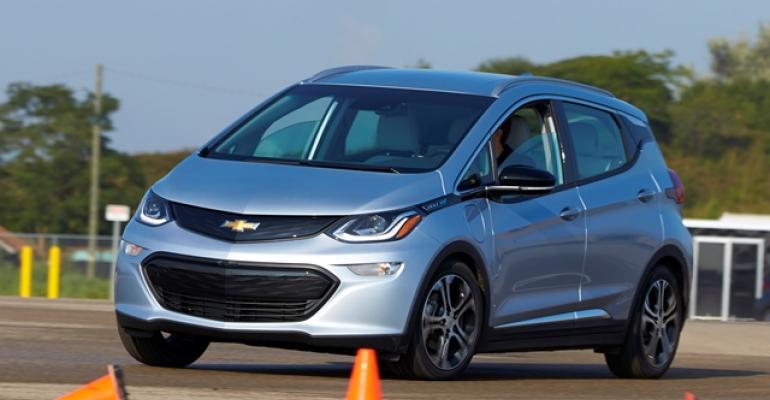 &ldquo;We are near the tipping point for mainstream adoption,&rdquo; says Darin Gesse, product manager for the Chevrolet Bolt battery-electric vehicle.

LIVONIA, MI – General Motors thinks the U.S. electric-vehicle market is on the cusp of going mainstream, but the Detroit automaker and other key players may soon reach sales volumes ending an important consumer tax rebate established years ago to kick start the segment.

“We are near the tipping point for mainstream adoption,” says Darin Gesse, product manager for the Chevrolet Bolt battery-electric vehicle.

Gesse says GM draws confidence in a mainstream EV market because automakers are making breakthroughs in affordability, zero-emissions range and drivability. The Bolt costs $30,000 after applying the $7,500 Plug-In Electric Drive Vehicle Credit from the Internal Revenue Service, while the coming Model 3 from Tesla costs $35,000 before credits.

The Bolt travels an EPA-estimated 238 miles (383 km) on a single charge, making it the longest-distance EV in its class. The upcoming Model 3, which is expected to reach full production of 5,000 units per week in December, will go 220 miles (254 km).

“Range anxiety is no longer an issue,” Gesse tells WardsAuto on the sidelines of an autocross event to demonstrate the Bolt’s growing performance credentials.

He says 56% of Bolt buyers cite range as the No.1 reason for purchase and 97% of owners report the car’s range exceeded expectations. Bolt owners are charging up every three days on average, further evidence of reduced range anxiety, Gesse says.

GM officials say Bolt owners and enthusiasts also are increasingly coming together for track events, although EV racing remains a niche pastime in a niche sales segment. Journalists were provided track time with a series of Bolt models here recently, and the cars performed well against a more traditional autocrosser, the Volkswagen GTi Sport.

“EVs can be fun to drive,” Gesse says, alluding to the copious, instantaneous torque EV motors provide. “You get that EV smile.”

Gesse says consumers are recognizing the unique attributes of EVs, evidenced by sustained sales of the Bolt as GM rolled out availability to 50 states after starting in EV-friendly California and Oregon exclusively. The 6-month rollout peaked a few weeks ago and Bolts are available at 1,235 certified Chevy dealers.

“We are increasing sales month by month,” Gesse says.

GM employed the same strategy for the Bolt rollout as the Chevy Volt extended-range electric vehicle, but the Bolt reached 50-state availability earlier because participating dealers committed to the EV sooner and fewer new tools had to be added to dealership service departments.

​Gesse characterizes the popularity of EVs as moving from first adopters to first-followers, where more first-time buyers are converting over from gasoline. He says 33% of Bolt owners did not previously own an alternative-propulsion vehicle and one-third of them traded in a gasoline-powered car.

The Bolt has been a boost to Chevy’s technical reputation among Americans, he adds, with 70% of buyers new to the brand.

At the same time, federal credits for plug-in electric vehicles, which vary in amount based on battery capacity, are capped at 200,000 sales. The second calendar quarter after an automaker crosses that threshold the tax rebate available to a buyer of one of their PHEVs is halved, according to the IRS. The fourth quarter after that it is cut to 25% of the original value and it is phased out altogether at the beginning of the sixth quarter.

According to WardsAuto data, GM has delivered 150,051 PHEVs in the U.S. since Jan 1, 2010, when counting began for the credits. Tesla follows with an estimated 132,970 sales, although their total should rise sharply when thousands of reservations for the Model 3 are filled, putting the EV-maker past 200,000 deliveries ahead of GM.

Executives at Nissan, which has sold 113,282 Leaf BEVs, told WardsAuto in 2015 they were hoping to negotiate with federal officials to keep the credits going. Absent that, Nissan says more work must be done to slash battery costs.

Consultant McKinsey estimates the 60-kWh battery pack in the Bolt is a $13,600 component.

Gesse says it is unclear how GM intends to manage an end to its credits, but admits the automaker likely will have the luxury of watching Tesla’s reaction. He declines to speculate whether GM would have to slash pricing on a car such as the Bolt.

The federal government also could make changes to the program before either company exceeds 200,000 sales, and state governments offer programs, too. Colorado, for example, offers a hefty $6,000 tax credit.

Whatever occurs, Gesse says GM will not walk away from plug-ins.

“If anything, we’re gearing up more and more,” he says.