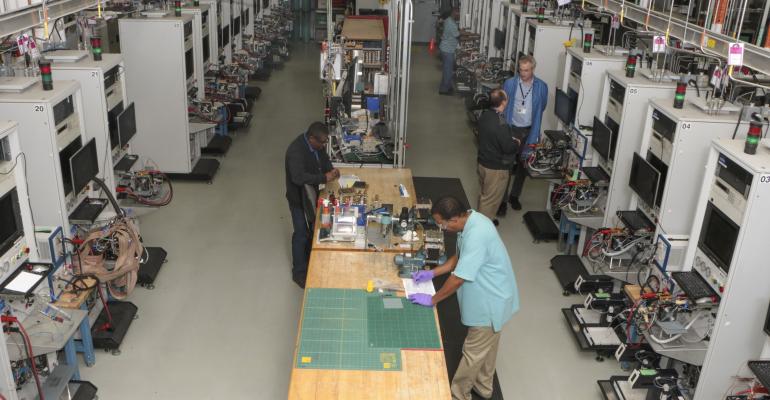 The automaker has reservations about launching a production FCEV without a robust public refueling infrastructure. But do not mistake reluctance for complacency, GM&rsquo;s fuel-cell chief says.

PONTIAC, MI – General Motors trails Asian rivals in launching a production-model hydrogen fuel-cell vehicle because developments in the space are occurring so quickly the propulsion systems are outdated before they can get to market, the automaker’s chief engineer on the technology says.

“It’s not that we couldn’t,” says Charlie Freese, executive director-global fuel-cell activities at GM. “We could have one in production, but if we did it would be with an antiquated (propulsion) unit.”

Honda will launch its second-generation Honda Clarity FCEV sedan by the end of the year, coming quick on the heels of Toyota’s 4-door Mirai in October 2015. Hyundai led the industry’s rollout of the technology in the U.S. by putting it on a version of the Tucson CUV in 2014.

Asia’s seemingly long lead on production FCEVs in the U.S. is ironic because GM widely is considered the industry leader in R&D around the technology, having invested more than $1.5 billion over the years.

GM also says it has had a commercially viable FCEV propulsion system since 2010. But you won’t find one for sale at your local Chevrolet, Cadillac, Buick or GMC dealer because much of today’s FCEV technology is already yesterday’s news, Freese says.

“It has to be timed right,” Freese says on a recent tour of GM’s new fuel-cell lab here, where a display of GM’s first-generation FCEV system and a 2016 prototype half its predecessor’s size underscores the rapid progress being made in the field.

Even the 2016 prototype is already out date. “It’s antiquated,” Freese admits.

GM also has reservations about launching a production FCEV into market without a robust public refueling infrastructure, he adds.

California is ground zero for the FCEV movement, driven by the state’s strict emissions policies, but it is home to fewer than a dozen public refueling sites. Outside of California, the public hydrogen-refueling infrastructure is almost zero. And where FCEV owners can get hydrogen in the Golden State, the stations sometimes are out of hydrogen or dispense fuel too slowly.

Hyundai Motor America CEO Dave Zuchowski expects up to 40 refueling points by the end of this year in California – the only state where the Korean automaker, Toyota and Honda sell their FCEVs. That would be up from less than a dozen today.

“I think we’re beyond the worst of it,” he tells WardsAuto, adding that Toyota’s launch will add more FCEVs to the state’s fleet and should spur additional investment in refueling sites, which cost $1.5 million each.

Freese says that’s a risk GM does not want to take.

“If we come too early with a fuel cell, the customer may not be happy,” he says.

Hyundai, Toyota and Honda think the chance to assert technical leadership is too good to pass up. They also generally believe FCEVs are a better method for emissions-free driving than battery-electric vehicles, and consumer credits for Californians buying a FCEV are twice as juicy as those offered on BEVs.

The bets by Toyota, Honda and Nissan, which plans a commercial FCEV in the 2020 timeframe, also are supported by an aggressive industry rollout in Japan. Alongside help from the Japanese government, the three automakers have pledged to kick-start a hydrogen-refueling infrastructure by partially covering the operating costs of stations and providing operators with customer-service training to create “a convenient, hassle-free refueling network.”

But do not mistake GM’s reluctance for complacency, Freese warns. The automaker remains committed to the technology, he says, evidenced by a recent relocation of GM’s fuel-cell R&D shop to its global powertrain headquarters here from Rochester, NY.

And on the technical front, GM says it already has leapfrogged the 2016 prototype, which at 265 lbs. (120 kg) weighs half as much as the previous-generation unit powering the Equinox fleet. It’s more than half the size, too, so it will fit in low-hood applications such as a sedan.

The 2016 prototype also is easier to manufacture, more durable and costs have decreased “by an order of magnitude,” Freese says.

The automaker is accelerating its FCEV program through partnerships, most notably an agreement with Honda to co-develop next-generation fuel-cell and hydrogen storage technologies targeting commercialization in the 2020 timeframe. They plan to share parts to drive down costs and engineers are co-located at the fuel-cell labs of each automaker.

“We are married to Honda on fuel cells,” says Dan Nicholson, vice president-global powertrain at GM.

GM recently expanded its fuel-cell research activities with the U.S. Army. A Chevy Colorado midsize pickup has been modified to operate on a commercial hydrogen fuel-cell propulsion system and will be exposed to the extremes of daily military duty for 12 months.

A key element of the experiment is testing GM-developed exportable power systems, which would provide electricity to troops in the field.

Freese says GM plans to upgrade the Colorado’s system with next-generation FCEV hardware currently under development. Those upgrades would further improve manufacturability and substantially reduce costs, he says, as well as heighten scalability of the systems. He sees platinum content of those systems entering the “sub-10 gram range” and the gold used as a conduit for electricity in the fuel stack replaced with a lower-cost material.