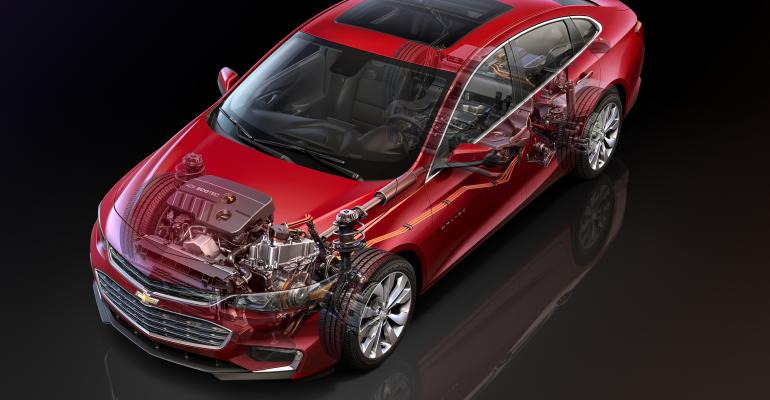 PALO ALTO, CA – General Motors marketers are convinced the redesigned ’16 Chevrolet Malibu Hybrid will snag buyers with the promise of 48 mpg (4.9 L/100 km), despite sagging fuel prices and tepid sales in the segment.

“I would be concerned if it only delivered a couple extra miles to the gallon, but this is a quantum leap,” says Steve Majoros, director-marketing, Chevrolet Cars and Crossovers.

GM has not received U.S. EPA estimates for the Malibu Hybrid, but its testing puts the longtime family sedan at 48 mpg in the city cycle, 45 mpg (5.2 L/100 km) on the highway and 47 mpg (5.0 L/100 km) combined. The automaker considers those numbers segment-leading.

“Those are some dramatic numbers, and we think there are customers out there who will appreciate it,” Majoros tells WardsAuto on the sidelines of a media preview for the car here.

The Malibu Hybrid will not arrive at U.S. dealers until spring, but it’s unlikely the national average for a gallon of gasoline will tick too much higher than the $2.014 it started at this week, according to the American Automobile Assn.

​Majoros remains optimistic, estimating a 10% take rate for the Malibu Hybrid. He thinks the technology under the hood will be as attractive as the car’s fuel efficiency.

“Look at why people buy hybrids and fuel type comes up as much as fuel prices,” he says. “These customers want technology. It’s in their mindset.”

The Malibu hybrid is not short on technology. It borrows much of its powertrain from the Chevy Volt extended-range electric vehicle, mating a naturally aspirated 1.8L 4-cyl. engine with a 2-motor electric drive unit to assist during acceleration. The combination provides 182 hp.

A 1.5-kWh lithium-ion battery provides the electric power and can propel the car to 55 mph (88 km/h) on electricity alone. Regenerative braking maintains the battery’s charge.

In another bit of energy saving, the Malibu Hybrid uses exhaust-gas-heat recovery to warm up the engine more quickly, which reduces carbon-dioxide emissions at startup. EGHR also heats the cabin.

Majoros says GM will play up the Malibu Hybrid’s connection to the Volt when it launches, especially in key hybrid-vehicle markets such as Los Angeles and San Francisco where the Volt has seen success.

Piggy-backing on the Volt also could distance this Malibu Hybrid from the previous-generation model, which used GM’s eAssist mild-hybrid technology. The technology united a 2.4L 4-cyl. with a 115V li-ion battery and 15-kW (20 hp) motor-generator.

The system provided electric boost to the ’13 Malibu Eco during acceleration and a smooth stop-start function but robbed trunk space, a key shopping feature for customers in the midsize segment. And when GM switched to a new stop-start technology for the next model year, it killed eAssist because standard models achieved the same combined-cycle fuel economy as the Malibu Eco for nearly $4,000 less.

The ’08 and ’09 Malibu also offered a hybrid powertrain, but the fuel-economy gain over standard models was unimpressive and again the technology came at a premium.