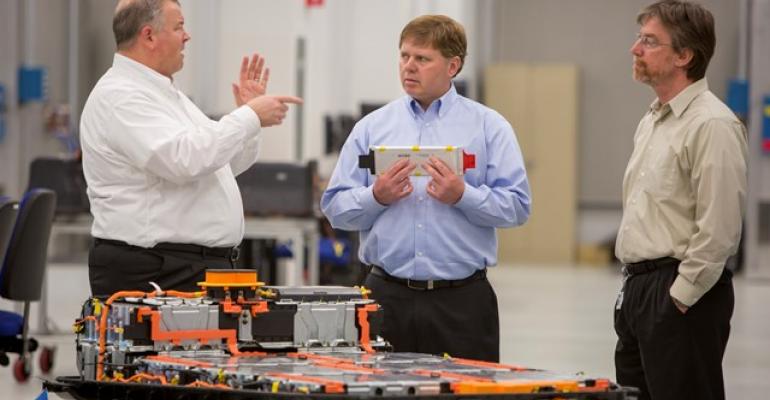 Tim Grewe, general director-electrification, says prototypes have pushed past that number and he expresses confidence many buyers of the $35,000 EV will exceed the 200-mile range. Official numbers aren’t expected for several months, but hitting that distance is key because GM says its market research shows 70% of buyers would consider owning an EV as their primary vehicle with that capability.

Beating 200 miles also is important in light of competitor Tesla’s announcement last week its Model 3, due in late 2017, will travel 215 miles (346 km) on a charge. More than 250,000 potential buyers have placed deposits for the car, which also has an estimated starting price of $35,000.

The second-generation Nissan Leaf due in 2017 also is expected to hit a similar range and price point.

Range and pricing aside, GM engineers say the Bolt’s clean-sheet design represents a revolutionary leap in electrification technology, from its optimized battery pack to its compact 200-hp electric drive motor.

Compared to the Spark EV, for instance, the Bolt’s 961-lb. (436-kg) lithium-ion battery pack has twice the mass but produces triple the energy at 60 kWh, says Greg Smith, engineering group manager-global EV battery packs. The nickel-enriched cells provide a higher tolerance for heat while offering increased capability, he says.
At the same time, the Bolt’s battery pack increases chassis torsional stiffness 28% due to its rigid construction that includes five integrated crossmembers as part of what essentially makes the battery a structural component of the floor pan.

“A high-mass, large battery turned into a benefit that is a big factor in making the car fun to drive,” Grewe says.

The entire battery system and structure, including 96 individually serviceable cells packaged into five temperature-controlled modules, is built by LG in Korea and shipped to GM’s Orion Township, MI, plant for installation into the vehicle.

Meanwhile, the Bolt’s electric-drive unit at 168 lbs. (76 kg) is just 18 lbs. (8 kg) heavier than the unit in the Spark EV, but offers higher power and torque densities and operates at nearly double the maximum speed at 8,810 rpm. GM says peak efficiency is about 97%. The motor also is built by LG in Korea.

GM says it doesn’t expect the Bolt to compete with the Volt for customers and unlike Tesla, the company isn’t taking deposits for the car and won’t reveal how much interest it has drawn from potential buyers.