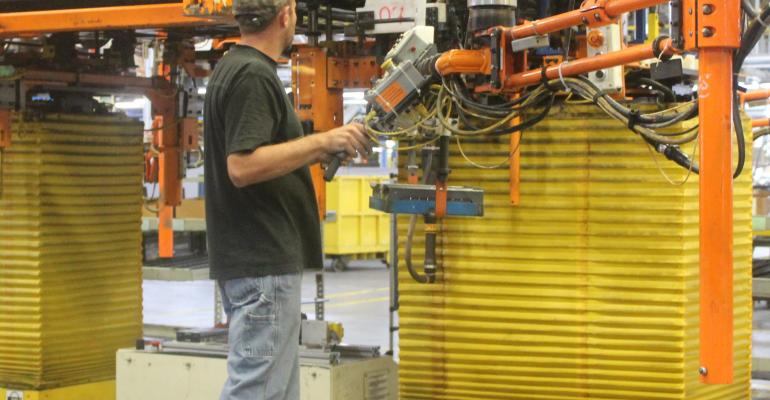 Two line workers attach the battery or gas tank &ndash; depending on model, Bolt or Sonic &ndash; comes to their zone, with 10 fasteners. Further down the line, another two workers attach the driveline, this time with 12 fasteners, engaging in virtually the same process whether it&rsquo;s a Sonic or a Bolt.

LAKE ORION, MI – Eight months after General Motors launched the Chevrolet Bolt, the all-electric CUV generally has been well-received, winning multiple awards and, for the most part, keeping pace with sales targets.

Whether the market is ready for the Bolt, which went on sale earlier this month; whether customers consider its advertised 238-mile (383-km) range sufficient to alleviate anxiety; and whether it can be sold without subsidies all are issues to be resolved over time.

But one fact is indisputable: GM nailed the model’s December 2016 launch at its Orion Assembly Plant in southeastern Michigan.

An early August walk through the plant reveals half of daily output are Bolts (more than 100, a fraction of them being Ampera-e models sold under the Opel brand in European markets). The other half – also more than 100 units – are gasoline-engine-powered subcompact Chevrolet Sonics, both 4-door sedans and 5-door hatchbacks.

Both models move down the line in sequence – first a Bolt, then a Sonic, then another Bolt, and so on – through the course of the plant’s 8-hour shift.

Yves Dontigny, the Bolt’s production-launch manager, says the operation is seamless. A close look at the assembly process seems to back him up.

For one thing, the battery pack and fuel tank are installed at the same station with no bypasses on the chassis line. Further down the line comes the “marriage” of the powertrain, both gasoline and electric, to the cars.

“Just like any other powertrain,” Dontigny explains, “the electric-drive unit is installed on the same line as the Sonic’s internal-combustion engine. The challenge was how to package the unit so as not to require a parallel or separate line.”

Demonstrating how the production and engineering teams did their jobs, two line workers attach the battery or gas tank – whichever model, Bolt or Sonic – comes to their zone, with 10 fasteners.

Further down the line, another two workers attach the driveline, this time with 12 fasteners (six on each side), engaging in virtually the same process regardless of whether it’s a Sonic or a Bolt.

The only Bolt-specific assembly operation is filling the EV’s high-voltage electronic module with coolant.

Key components are assembled on a series of sublines, then are brought to the main lines on dollies. Included are battery packs, two gasoline-engine variants and most body-panel assemblies.

Except for the Bolt’s aluminum doors, there is almost nothing out of the ordinary for plants that produce more than one model as far as stamping and body assembly operations go. And therein lies one of the untold stories of what GM has done.

In the plant’s existing configuration, the automaker could almost triple Bolt output with no capital investment and without adding a shift just by changing the production allocation to all Bolts, rather than 50%, and improving takt time to 45 seconds from one minute at present.

“We can add a shift. We can speed up the line. We can slow the line. Everything is based on demand,” Dontigny says.

Of course, that assumes the Bolt is meeting its quality targets. Dontigny says it is ahead of those targets.

The Bolt, unlike GM’s Volt plug-in hybrid, uses a battery pack produced at supplier LG Chem’s Incheon, South Korea, plant and then shipped to the Orion Twp. assembly plant. The motor and drive unit also are produced at Incheon.

GM suspended production of the two models in July for the traditional 2-week summer furlough but extended the shutdown by a week to draw down Sonic inventories that had surpassed 100 days. GM says there were no changes in production plans for the Bolt, which now is available in all 50 states. By the end of July, WardsAuto reported, Bolt inventories were at 73 days and Sonic inventories had fallen to 78 days.

From January through July, the automaker had sold 9,563 units of the Bolt, including 5,731 in July alone. “Our next challenge is to increase demand,” Dontigny says.